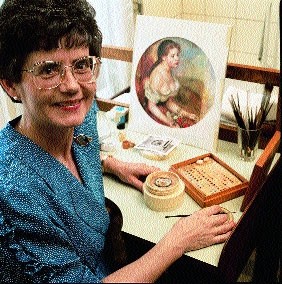 Few living artists are as much in demand as Suzanne Rohr, a Swiss painter whose works are sold long before she lifts her brush. Only a select group of elite collectors will ever lay eyes on a painting crafted by Rohr, whose strong pointillist style gives her renderings of 19th-century masterworks a distinct signature. Rohr, who has worked almost exclusively by commission for Patek Philippe for the last 35 years, is a member of a dwindling group of artisans: enamel painters who embellish watchcases and dials with extraordinary miniature scenes. The future owners of a pocket watch painted by Rohr will wait four years for delivery, and they will do so happily, realizing that they are fortunate just to acquire one.

While so much attention is focused on high complications, miniature enamel painting remains the most exclusive yet underappreciated specialty in the Swiss watch industry. Only seasoned connoisseurs recognize the intricate skills and historical significance that each piece represents. In a sense, a painted enamel timepiece is the ultimate collector’s watch: both beautiful and exceedingly rare. “Collectors who want something that is absolutely unique are now starting to buy more and more traditional enamel,” says Rudolf Bull, head of watchmaking at Geneva’s Vacheron Constantin, which contracts the work of another coveted enamelist, Mariela Sechaud. “Each year we try to make a few more.”

Miniature painting is the most elaborate form of enameling, which encompasses a variety of techniques including cloisonné, plique-à-jour, and champlevé. Enamel is, more or less, glass: a compound of silicates and other elements that is transformed into colorful, translucent film when baked at high temperatures. An enamel painter uses an extremely fine brush to apply enamel color compounds and oil on a white enamel or mother-of-pearl surface, creating a scene, layer by layer, working from light to dark colors.

What makes the enamel painting technique even more complex (and expensive) is that it requires firing after each layer of color is applied. A detailed painting can undergo this process more than 20 times, and with every trip to the oven, the work is put at risk for cracks and discolorations. This, as many enamelists like to say, is where the art ends and the praying begins. When completed, the multiple layers create almost palpable depth and brilliant contrasts that do not fade over time.

Enamel painting is one of the last true cottage industries. The artists who can rightly be considered heirs to the centuries-old Geneva tra-dition work mostly from their homes by commission for the select few brands that can support this level of business. These artists often draw inspiration from well-known artworks, with the most popular subjects dating back to the Baroque and Romanticist periods. A custom creation can also be commissioned, making enamel a medium for the ultimate horological purchase: a made-to-order timepiece.

Enamel painting is inextricably linked with Geneva’s heritage as the capital of prestige watchmaking. While watch technology languished in the early 17th century, unable for decades to develop the necessary accuracy to record even minutes, enamel painting flourished. Within a few years of the craft’s first appearance in France, miniature enamel portraitists, including the early master Jean Petitot, who adapted vivid English watercolor techniques, were in demand across the courts of Europe as the prestige artisans. To escape the religious persecutions of Louis XIV, the enamel artists, along with many of Europe’s watchmakers, most of whom were Protestant, emigrated to Geneva, a refuge where they could practice their craft. For the next 150 years, institutions like the renowned Fabrique would produce beautifully enameled timepieces that secured Geneva’s reputation as the world’s center for luxury watchmaking.

“Unlike oil paintings, which darken over time, these enamel watches show the true colors of the 18th century,” says enamel expert Hans Boeckh, who curates one of the most significant enamel watch collections at the Patek Philippe museum in Geneva.

Geneva’s Bovet Fleurier grew out of the last great era of enamel painting in the early 19th century and maintains many of the same traditions today. Originally, Bovet specialized in exporting enamel timepieces to clients in Russia and the Far East, which explains why its name remains largely unknown in North America. Bovet’s use of natural and animal themes as well as vibrant champlevé or mother-of-pearl backgrounds is a distinctive style peculiar to the Eastern markets. Bovet’s symmetrical matched pairs are, as they were in the 19th century, an area of special interest for collectors, who may spend years trying to locate and secure the matching second watch.

The precious few enamel painted watches that emerge each year under the aegis of the premier watch houses are prestige items much like their forebears, yet today, the art is on the cusp of extinction. The golden age of enamel ended in the mid-19th century as revolution eroded its aristocratic client base and the Opium War cut off the massive Chinese market. At the time, many wealthy patrons turned to the new technology of photography as the representational art form of choice. Consequently, the number of Geneva enamelists has steadily declined to the handful who remain today.

There is no school for enameling in Switzerland, and the firm that produced supplies has been closed for nearly 50 years. The few enamelers who continue to practice the craft do so in a vacuum, often isolated from one another. Unfortunately, they are reluctant to pass on their secrets in an environment where limited demand makes it difficult and competitive to earn a living practicing their craft.

Efforts are being made to save enameling, but it will be a difficult task. One of the essential steps is developing successors to the current generation of artists, most of whom have only a few productive years ahead of them. Christian Thibert, head of the enameling and engraving operation at Patek Philippe, has accepted this challenge as part of his job.

“There are so few talented people who consider this kind of work,” he says. “And even then it’s difficult to foster a relationship where an artist is willing to pass on her techniques. They are a very sensitive group.”

One ray of hope emanates from outside the traditional school of enamel painting. Because most watch houses simply don’t have access to experienced traditional artists, some have created modern departments of their own from scratch. Miklos Merczel had been working as a master watchmaker at Jaeger-LeCoultre in the Vallée de Joux when he decided to take his career in a new direction that capitalized on his talent as an amateur painter. Now, he and an apprentice produce about 26 enamel watches annually, concentrating on Art Nouveau interpretations of Alphonse Mucha works that complement the company’s Reverso model. It took four years for Merczel to develop and perfect his own enamel techniques.

This year, Roger Dubuis opened a new Geneva factory that includes an enamel department of three. The chief painter, Dominique Baron, was recruited from a decorative arts school in France by Dubuis’ president, Carlos Dias. Baron oversees the production of a new lim-ited series of cartographic, or map-themed, dials with a modernistic style.

The enamel painted pieces from Jaeger-LeCoultre and Roger Dubuis are less labor-intensive and more suited to serial production than those of the traditional Geneva school. However, they have brought the art of enamel painting to the wristwatch and to a much larger number of appreciative clients. And that may be just what is needed to ensure that the future of enamel painting remains as vibrant as its past.

Miniature painting is far from the only enamel art form with a historical connection to watchmaking. Cloisonné is an equally complicated technique in which a design is created with a thin metal wire that separates differently colored areas (cloisters) of enamel, much like a stained glass window. The designs are often very intricate and require hours of painstaking handwork.

Cloisonné, like miniature painting, is practiced by independent artisans who reside throughout the French-speaking regions of Switzerland. But unlike enamel painting, this technique can be used to produce larger numbers, often in series rather than as unique pieces, making them much easier to obtain. If you want a taste of a centuries-old craft without the exertions and frustrations associated with acquiring a painted enamel watch, cloisonné offers an excellent alternative.

Another advantage that cloisonné has over miniature painting is that it is more readily adapted to wristwatches. Ulysse Nardin began producing enamel wristwatch dials in the late 1980s, initially using the simpler champlevé technique (made famous by Fabergé) under the direction of enamel master Michel Vermot. Full-fledged cloisonné followed, in nautical themes that demonstrated the remarkable color possibilities of the craft.

In the intervening years, cloisonné dials have been produced by other firms, many of which still commission enamel painting. Bovet annually releases a number of watches featuring natural themes, as does Vacheron Constantin, whose Audubon series depicts distinctive interpretations of the American naturalist’s prints. Many of these pieces are also enhanced with painting techniques, which add to their detail. Christian Thibert of Patek Philippe, himself a master engraver, has mixed engraving, cloisonné, and painting to create highly original enamel pocket watches that are in every way one-of-a-kind.