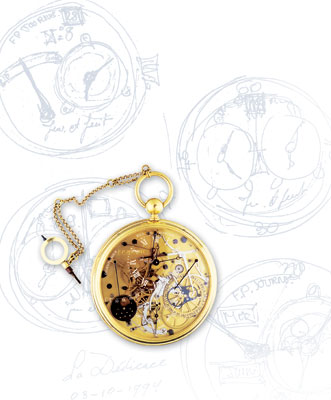 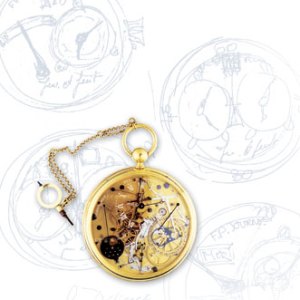 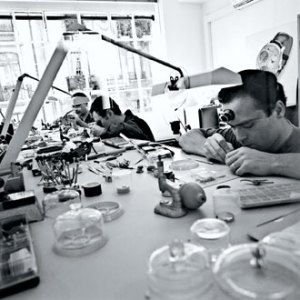 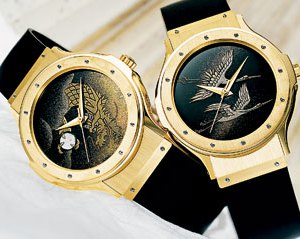 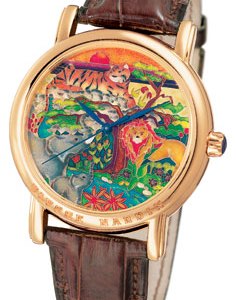 “Oh, I’ve already got that.” these words fall like a heavy blow when women of high style, bristling with shopping bags, range up to one another to size up the day’s booty. Even between men idly comparing watches, the barb loses none of its sting. The last thing you want to see when you have just secured a highly coveted timepiece is someone else cavorting with the very same model.

The obvious solution is to purchase something no one else can acquire. But this is more complicated than it sounds, because although we live in an age when luxury service is growing ever more personalized, fine watches have become increasingly mass-produced items. Few companies are willing to interrupt their streamlined production processes so that you may add the widget of your choice to a piece they have spent millions promoting as perfect.

It was not always this way, of course. Mechanical watchmaking once was a business of artisans who catered to the whims of select clients, often traveling to various capitals to take orders. When each watch was handmade, bespoke was the rule rather than the exception, a factor that undoubtedly contributed to the cachet of owning a fine watch.

Today, those who value such prestige look beyond what is available over the counter to reach for the horological Holy Grail: a made-to-order timepiece. Only an exceptional client will be considered for such an undertaking, and the end result usually represents the zenith of the manufacturer’s capabilities.

Collectors covet the creations of independent watchmakers, such as F.P. Journe, considering the artists the modern equivalents of the great 18th-century masters of the craft.

The legendary rivalry between James Ward Packard and Henry Graves perhaps best illustrates the spirit of the bespoke watch. During the 1920s, these two powerful American industrialists, both watch enthusiasts, sought to outdo each other by commissioning special, ultracomplicated timepieces from Patek Philippe. The ne plus ultra made for Graves in 1933 was an oversize turnip of a pocket watch with 24 complications. The 1933 Graves Supercomplication ranked for decades as the most complicated watch ever made, and it sold at auction in 1999 for $11 million, the highest sum ever paid for a timepiece.

Sadly, the days of ordering a custom timepiece from Patek Philippe have passed forever, probably because of the mind-boggling value such pieces would have among those who treat watches as investments. Each one is by definition one-of-a-kind, and because rarity is one of the characteristics most prized by collectors, custom watches from the major collector brands, such as Audemars Piguet and Vacheron Constantin, are tailor-made for speculation. Patek Philippe, in particular, has voiced its preference for working with collectors rather than speculators, and therefore, like many other houses, devotes its limited watchmaking resources to regular production.

This is not to say that some degree of customization is not available from the prestige houses. The most common form is, of course, engraving. While inscriptions can provide priceless sentiment for the owner, anyone can have a personalized message etched into a caseback. You certainly will not incite the envy of too many rival industrialists with the traditional métier of the retirement gift.

Some of the premier watchmaking companies do offer a more enticing compromise, however. Blancpain and Audemars Piguet, in particular, extend the option of decorative engraving, such as monograms, on the winding rotor of some of their high-end automatic models. The engraving, visible through a sapphire exhibition back, gives the impression of a customized movement, which is the one step the larger manufacturers will not take.

A few of the major watch companies will go beyond jeweling or engraving to produce a watch that is closer to being a one-of-a-kind piece made expressly for you. A special dial or, in rare cases, a hunter cover are customizations that are decorative in nature. But because they employ techniques common throughout the watch industry, these watches are nonetheless highly traditional timepieces—though with more overt personality than anything engineered solely to showcase interior mechanics.

The most common of these techniques is cloisonné, a process in which fine metal wire separates areas of heat-fired vitreous enamel to compose a sort of pictorial mosaic. Size and scale impose a limit on the level of detail that can be achieved, but the most skilled artisans can produce stunning work. Ulysse Nardin, a company that has promoted the technique for a number of years, recently delivered an outstanding specially made cloisonné watch to a customer in the United States. The requested jungle scene proved an ideal subject for the artisans, who responded with a surprising level of detail and subtle shading.

Hublot also offers cloisonné enamel as part of its Art Collection of artisan watches, all of which can be customized. The collection features the time-honored artisanal techniques of champlevé enamel, bas-relief, incision engraving, and enamel painting. The latest discipline represented in this series is the Urushi style of Japanese lacquer painting. Artisans in Japan complete the dials and then Hublot assembles the watches in Switzerland. The style is elegant and well suited to Hublot’s cast designs, but like all idiosyncratic decorative techniques, it is not appropriate for every subject matter.

While custom decorations are unique and appealing, for a mechanically obsessed watch aficionado, the ultimate bespoke timepiece would hold a special movement created just for him. Though you are not likely to receive any satisfaction from the establishment brands on this score, other makers are prepared to fulfill the desires of the right client.

Collectors covet the creations of independent watchmakers, such as F.P. Journe, considering the artists the modern equivalents of the great 18th-century masters of the craft. In fact, Journe cut his teeth producing custom pocket watches, including the piece he equipped with a three-dimensional planetarium for a client with an interest in scientific equipment. Although he now produces a regular collection, Journe continues to create special, often breathtakingly elaborate, pieces for some clients.

Working with independent watchmakers, however, poses similar challenges to commissioning a custom decorative piece from one of the larger manufacturers. Indeed, the independents can be even more selective about the clients with whom they will work. Creating a one-off piece is a major allotment of valuable resources—as evidenced by the prices, which can be several times greater than a similarly complicated piece in an independent’s regular production lines. Therefore, depending on the prominence and personality of the watchmaker, he may want to meet you to assess your worthiness for such an effort. All of them accept only those projects they deem feasible and appropriate challenges for their skills.

Like the larger companies, each small independent maker has a distinct style that is reflected even in bespoke work. Although it has grown far beyond the size of an independent watch atelier, Roger Dubuis still bridges the gap between the independents and the major brands. If you are looking for a custom piece from a recognized name, the company would be an excellent choice, provided you are enamored of its signature style of flamboyant complications. For special clients, Roger Dubuis occasionally creates pieces with complications that are of a higher level than those in the main collection. This year, for example, a Russian client took delivery of a watch equipped with a minute repeater, tourbillon, and split-seconds chronograph. The combination of such difficult complications required the creation of a special case and dial. “We are getting more requests for pieces like this,” says company president Carlos Diaz. “Oddly enough, it’s always the same people who come back for something different. It is my intention to create a special department for this kind of work in our next expansion.”

Vincent Calabrese, who works in a modest studio in Lausanne, across the lake from Geneva, represents the opposite end of the spectrum. Calabrese’s style is idiosyncratic, incorporating distinctive case shapes and styles. On special request, he will customize one of his signature Spatiales watches, in which a simple hand-wound movement is suspended, seemingly floating, between two sapphire crystals. Calabrese will arrange the pieces of the movement, altering the position of the various wheels and other components, to conform to a shape of the customer’s choosing, such as an initial. The freedom with which he configures the basic parts of a mechanical movement is Calabrese’s genius, and he fabricates most of the components by hand. If you commission a tourbillon from Calabrese (built in a similar style), he will design and build the movement from scratch.

“I once owned a shop with many celebrity and royal clients, and everyone wanted a customized watch,” says Calabrese, who has since created high-profile pieces such as Corum’s Golden Bridge. “All we could do at the time was engrave, but now I work for the challenge, to prove something is possible.” Calabrese, who often works directly with clients, makes as many as 10 custom pieces a year, although the wait for delivery is currently two and a half years.

For all the hoopla surrounding the great brands and their illustrious histories, there is simply no experience that can match having a master watchmaker custom build a timepiece especially for you, though compared to a straightforward store purchase, it is a complicated and time-consuming exercise. Contending with the personalities and limitations of independent watchmakers, who may decline your request or delay the process, can be frustrating, to say the least. But in the end, a bespoke piece by a watchmaker such as F.P. Journe (who is devoting more resources to custom watchmaking) will be more than a source of satisfaction, pride, or envy. It will be one of the most prized artifacts to emerge from our present golden age of mechanical watchmaking.

From decorative engraving to a complete, made-to-order watch, custom work on any level requires a detailed approval process between manufacturer and client. Almost always, initial contact is with a retailer, because premium watch companies generally hesitate to circumvent their distribution channels. Dealing with a retail jeweler, however, can pose challenges. Some may be unaware of the customization possibilities of the brands they carry, and most would be reluctant to issue such a request for anyone who is not recognized as a prized regular customer. After all, it is unlikely that an unclaimed, highly customized piece could be sold to anyone other than the commissioning patron.

Once you have been suitably matched with a manufacturer, there follows a verbal or written exchange discussing your requests and ideas. In the case of decorative work such as engraving or enamel, the manufacturer must decide, often in concert with the artisans, if the subject matter can be appropriately rendered. If your request is accepted, the watch company will usually submit a design for your approval. Depending on the jeweler or the company involved, partial remuneration may be requested at any of these stages.