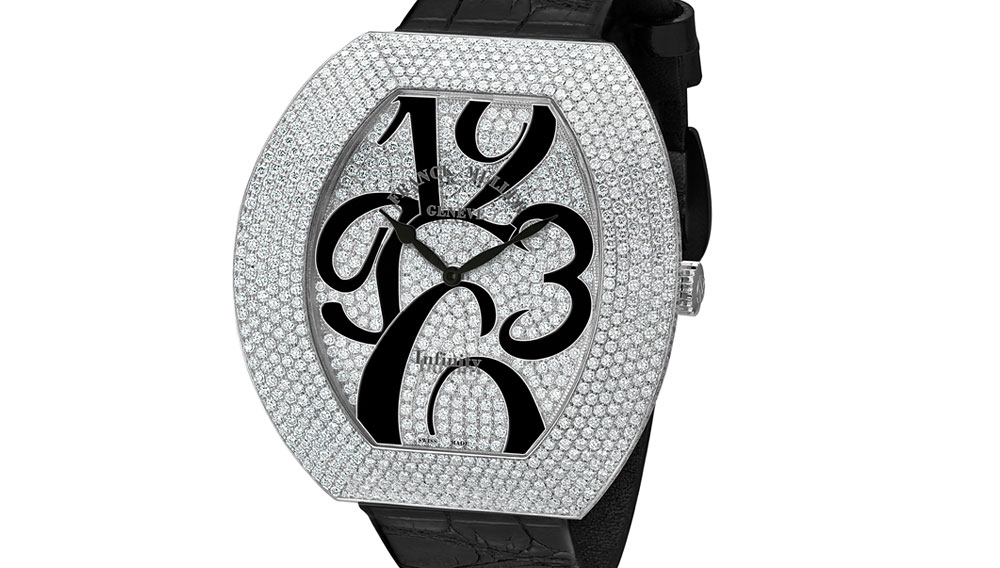 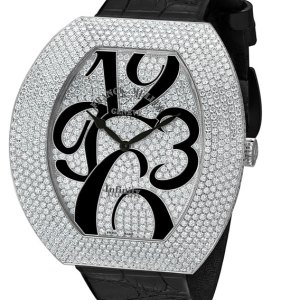 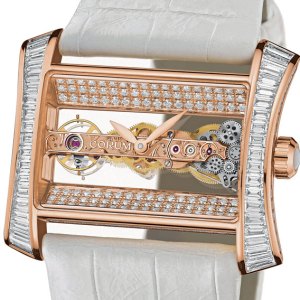 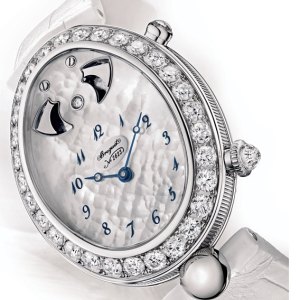 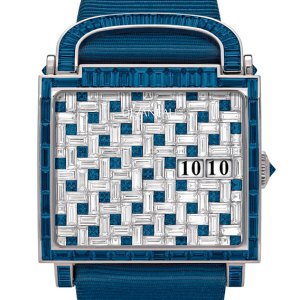 Women can count themselves fortunate that they need no longer choose between a dainty dress piece and a man’s watch that has been shrunken and ringed with diamonds. The best—we have selected four—eloquently express the union of gem-setting and watchmaking arts in a completely individual way. The results are spectacular, meaning they may not be everyday watches unless your days are filled with formal wear and fancy events—and if they are, you will need more than one.

It was just a few years ago that Franck Muller began to realize the full potential of his signature curvex design. Since then the company has transformed it into some of the most fashion-forward jewelry-watch designs in Switzerland. The Infinity Curvex is a fearlessly embellished timepiece that shows the brand’s mastery of the pavé setting as well as its potential for bold, graphic presentation. $73,300.

Originally created in the 1980s, the artful, in-line movement of the golden bridge seems tailor-made for the bold, reverse-curved case of the Golden Bridge Lady. Sapphire crystals front and back convey a sense of weightlessness. If that doesn’t catch your eye, the case is set with 76 baguette diamonds totaling 4.65 carats and just under a carat of round diamonds; the flange has 108 round diamonds at 0.9 carats. Limited to 25 pieces. $101,300.

The rarest of all ladies’ timepieces is a design of the highest complication. Instead of adapting a conventional and highly technical repeater movement for its Queen of Naples model, Breguet created a modified sonnerie movement that charmingly marks the hours in passing with a double strike on resonant gongs. Engaging details include a diamond marker indicating the “on” position for the automatic strike, visible hammers on the dial, and three carats of diamonds on the bezel (and another 14 points on the clasp). The clear sapphire case back reveals a movement arranged in the shape of a dove. $139,800.

Geneva-based DeLaneau is able to call on some of the world’s best gem-setting talent, as well as movement makers who can complete the brand’s vision. The Les Invisibles Damier, Calibre 1608 is an apogee in both fields. The dial has 9.46 carats of gemstones—45 princess-cut blue sapphires and 140 baguette-cut diamonds—invisibly set in a geometric parquet pattern, ensuring that the gems, rather than their settings, stand out. The case bears another 98 baguette-cut blue sapphires (totaling 15.42 carats) and 182 round diamonds (4.67 carats). The 1608’s digital display is an achievement in itself; the movement takes its name from the number of times the numerals “jump” in a single day. Price available upon request.