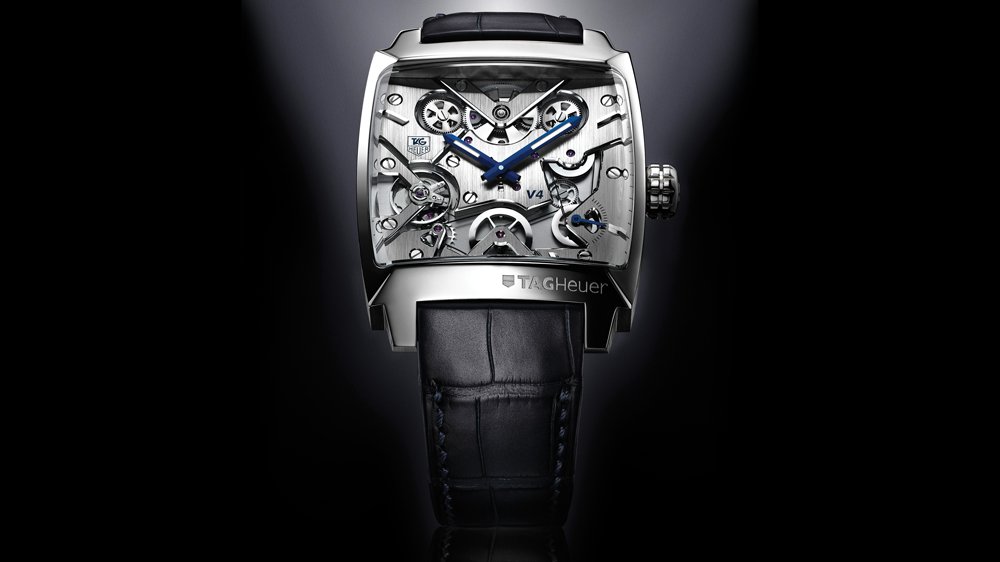 Many watch aficionados are familiar with the tale of TAG Heuer’s Monaco V4, the belt-driven concept watch. Despite the fact that it had to be painstakingly reengineered in the early 2000s, it was nevertheless one of the company’s most striking and ambitious designs. Most people assume it was the prototypist, Jean-François Ruchonnet, who authored the movement’s ties to automotive engine design. Much of the credit for this, however, goes to Christoph Behling, TAG Heuer’s longtime design collaborator, who contributed a great deal to the basic design of the piece and clearly understands the emotional weight of its connections.

“People are sentimental,” says Behling, “and there’s a trap that many people fall into with mechanics. They feel like everything was better in the olden times; that watch movements and old engines are better left untouched. The automotive industry found that it couldn’t afford to be stuck in a sentimental bubble. It found new ways to express performance and capture imagination.”

To make this point to TAG Heuer’s team, Behling presented them with a photo of a relatively conventional Ferrari engine from 1967 and a photo of the dramatically vee’d engine inside the Ferrari Enzo that was visible beneath a transparent rear panel. “It was the notion that if watchmaking wants to have a place in the future, then we cannot be making and designing sentimental reproductions,” he says. “You can create things only for the time that you live in.”

Shortly thereafter, when Behling penned the initial sketches of TAG Heuer’s Monaco V4, he conceptualized the use of rubberized belts—like a car’s timing belts—to connect the various cogs in the watch mechanism, increasing the movement’s precision. “It started with the automotive benchmark of timing belts,” he says, “and it was focused on creating a better-performing movement.”

With the intention of creating a movement with a lot of power, Behling increased the number of barrels in the design, going from the standard one to four. To make those barrels fit within the movement, the prototypist—Ruchonnet—had to place them in the shape of a V, a design element that parallels cylinder configurations in car engines. “The engineering package that came out of it more or less had that shape, so we celebrated it because it was cool,” Behling says. “It was more interesting than current movements of the time that were all flat.”

Even though the V4’s barrel configuration echoes that of automotive cylinders, Behling acknowledges that he didn’t purposely try to emulate that aspect of automobile engineering. The configuration simply produced the greatest mechanical efficiency. In that way, Behling believes the watch further parallels high-performance race-cars, since those cars are often beautiful vehicles, but their beauty is derived from a design centered only on performance. “Aesthetically, they’re stunning objects,” he says, “but they’re not created to be stunning. It’s just the result of efficiency and innovation. Because it’s so truthful and so honest it often looks very good. It looks better than someone desperately trying to style it.”