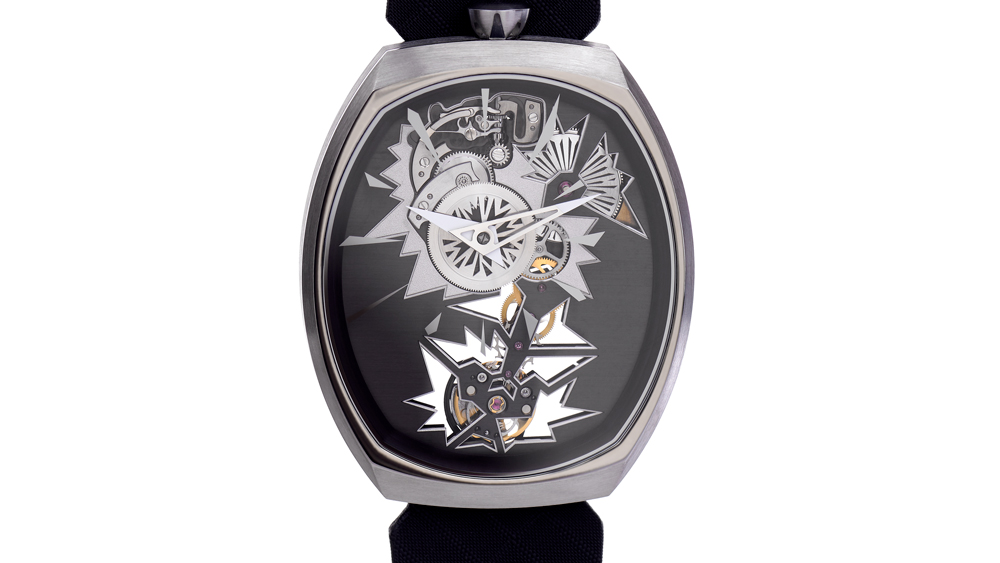 “After getting so much attention with our first Skull collection,” says independent watchmaker Fiona Kruger, “we were very concerned that our second collection would be satisfying and remain true to who we are.” Mechanical Entropy ($29,200), the first model in Kruger’s new Chaos Collection, features the brand’s first exclusive movement and continues the watchmaker’s sense of off-beat graphics and underlying philosophical bent.

The movement, which was made for Kruger by celebrated Geneva specialty shop Agenhor, is meant to graphically depict an instant of explosion, even as the movement continues to run. “For my second collection, I wanted to do something with time itself,” says Kruger. “I had to ask myself how to visually represent that on a watch.”

Agenhor, now managed by founder Jean-Marc Wiederrecht’s two sons, worked from the idea of stretching out the movement, exposing more of the components as if they were exploding outwards. The effect is enhanced by jagged apertures around the high-speed parts, dynamic skeletonization of wheels and an engraved barrel cover. The movement plate is PVD coated, then laser etched to sharpen corners and then finally treated by a galvanic bath to add rhodium or gold accents for the two unisex models.

True to its name, Mechanical Entropy is a complex statement about the natural descent from order to chaos. Kruger, however, isn’t about to let that dominate her client’s perception of the new timepiece. “It isn’t really important that people ‘get’ the concept,” she says. “It’s more that they see the piece and feel a connection to it.” Kruger became an instant sensation in the watchmaking community by tempering the relatively serious nature of her skull watches with a light graphical touch. With this first entrant in a new collection, she has codified that combination into a solid identity for her young brand.