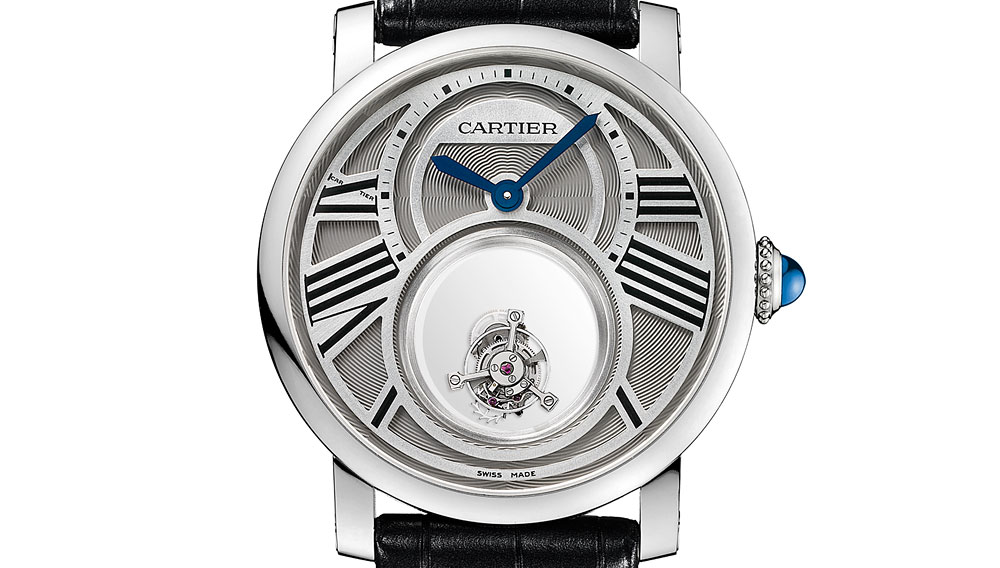 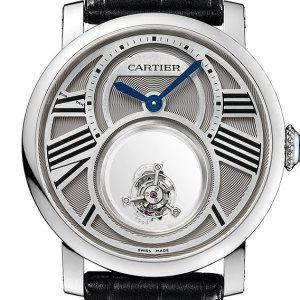 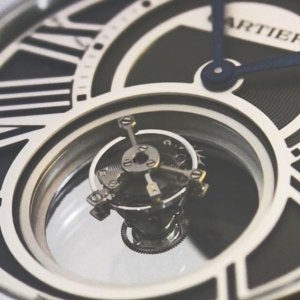 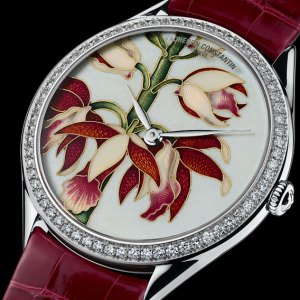 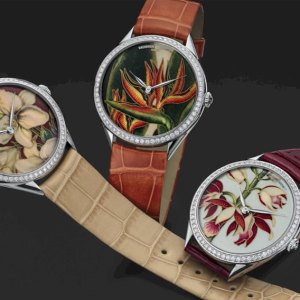 It is a rare thing when a watch company is able to channel a part of its history and advance it at the same time. Such is the case with Cartier’s latest Mysterious Double Tourbillon, a clear nod to the famous mystery clocks created during its golden age between the world wars. The tourbillon cage is mounted on a similar system of sapphire discs that rotate the cage itself and orbit it around the aperture without visible gears. The achievement of the Mysterious Double Tourbillon, however, is not technical; it is aesthetic. The 45 mm case is exquisitely proportioned, and the engraved and highly contrasted dial creates the impression of a 21st-century Art Deco style—perhaps the best place for the modern Cartier to situate itself.

In what it has proclaimed a year of ladies’ watches, Vacheron Constantin is devoting its considerable aesthetic resources toward the feminine side of its creations. Florilège is the newest installment of the brand’s Métiers d’Art series of timepieces. Made in three models, the Florilège watches mix traditional artisanal skills including guilloche engraving, gem setting, and cloisonné enamel into botanical scenes after the illustrations in Robert John Thornton’s seminal Temple of Flora, published in 1799. Vacheron Constantin’s in-house guillocheur provides texture to the plant life, but it is the subtle colorations of the master enameler Anita Porchet that give it a delicacy that imitates life.

Departing only slightly from its own established forms, the Italian maker Panerai has combined a rare foray into pocket watches with its most unusual movement, the P2005S GMT Tourbillon caliber. The result, the Pocket Watch Tourbillon GMT Ceramica, is one of those showpiece watches that will never remain in the pocket for long. With a sloping ceramic Radiomir-style cushion case (and ceramic chain), the 59 mm pocket watch suspends the movement with 12 pillar supports that double as hour markers. While you may look at the galvanically blackened movement, reminiscent of 2010’s “Lo Scienziato” wristwatch, your eyes will invariably be drawn to the longitudinally rotating tourbillon—the so-called chicken on a spit—that is the final draw of this 50-piece edition.

While many companies build summit-level complicated watches, no firm has a richer history with the traditional grand complication than Audemars Piguet. Its recipe—comprising a split-seconds chronograph, perpetual calendar, and minute repeater—has been executed at least once every year since the company’s founding. The latest version, one of a handful that have been cased in Audemars Piguet’s Royal Oak Offshore model, may be the most modern and wearable to date. The immaculately finished movement contains areas of sandblasting to match the titanium case, which, in addition to being light, contributes to the repeater’s sound. Besides enjoying these innovations, the owner can also take traditional satisfaction that the piece is made from start to finish by a single watchmaker.

With smoked sapphire glass and swathes of Superluminova, A. Lange & Söhne has optimized the Grande Lange 1 Lumen to be read in the dark. While the tens display is conventionally coated with the glow-in-the-dark substance, the more rapidly changing single digits are on a transparent disc that passes over a luminescent background that will keep its charge from ambient light. While legibility may be a practical German virtue, the dimensionality created by the semitransparent dial makes this the most visually exciting Lange 1 the brand has produced.

Inside Roger Dubuis headquarters, the word extravagant has become something of a design mantra. In the Quatuor, the brand’s latest creation, extravagance has become a serious—and effective—horological theory. The Quatuor is regulated by not one, but four oscillating balance wheels, which are averaged by differentials. Company designers worked on the theory that even if the individual balances are not precisely adjusted, their average will produce an accurate and stable rate—a concept that has been validated by other watchmakers’ experiments with similar systems. Inside the Quatuor’s massive 48 mm case, the four balances beat with an almost frenetic intensity, the signature of a mechanical style on par with the brand’s famously provocative design.

Housed in an updated Ingenieur case that has been spiced up with auto-racing features like a titanium aluminide alloy, IWC’s most recent perpetual-calendar complication has finally been given the no-nonsense technical treatment it deserves. The perpetual calendar brought the brand to prominence in the 1980s, and the new version, with a digital date-month display, is a worthy heir. An ingenious method of storing energy as the date makes its daily rotation allows the watch to instantaneously change all of its displays at the end of the month, despite the high-inertia problems inherent in these kinds of systems. Semitransparent dials and the reinvigorated case give the mechanism a technical allure it has never before possessed.

While it was purportedly built to celebrate Jaeger-LeCoultre’s 180th anniversary, the brand’s elaborately named Master Grande Tradition Tourbillon Cylindrique à Quantième Perpétuel Jubilee is actually the heir to a much more recent set of developments. The watch is the third piece the company has built to feature a large-scale dimensional tourbillon cage, in which a cylindrical hairspring is mounted. The watch’s outstanding accuracy—one version of the design placed second at a recent chronometry competition—and unusual looks have made it a draw card for the company. The concept of a cylindrical hairspring (exceedingly rare in a wristwatch) actually dates from 19th-century marine chronometers. A traditional case and perpetual-calendar display create a semihistorical tableau for the construction.