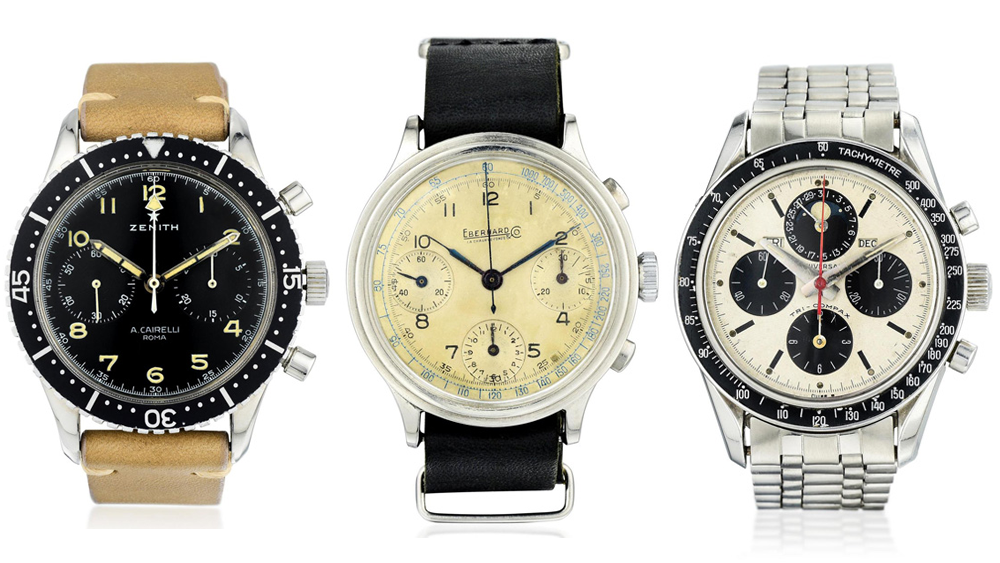 If you’re looking to get into watch collecting, but are unfamiliar with or wary about the auction market, Fortuna’s upcoming sale is well worth checking out. Vintage specialist and founder of Wind Vintage, Eric Wind, helped collector Greg Selch put together 98 of the 153 lots which includes rare, but affordable models (priced from $400 to $12,000) made by brands like Zenith, Omega and Heuer to lesser known, but equally respected manufactures like Zodiac, Universal Geneve and Favre-Leuba.

Selch, a Brooklyn-based furniture designer, is known for collecting vintage watches that have a particular aged patina or markings, so if you’re looking for something that looks like it has a story to tell, look no further. While he has somewhere around 1,000 watches in his collection, he’s parting with nearly one-tenth of them to serve a lacking area in the watch auction arena.

“What Eric and I are trying to do is bring something new to the market—to broaden it a bit,” says Selch. “We want to bring more people into collecting. You don’t always have to throw $10,000 into something that you’re not quite sure you know enough about. You could get in and start a nice little collection, really for a few thousand dollars. As time goes on, it could grow and become something very, very valuable.”

Online bidding is open now, but the sale will culminate in a live auction on Wednesday, June 5th at 1:00 P.M. EDT. If you happen to be in New York you can try the watches on your wrist in Fortuna’s store at 608 Fifth Avenue.

What Makes Them Collectible:

Right now, vintage watch collecting is hotter than ever, and even brands that have previously been overlooked at auction, like Omega and Longines, are starting to catch fire at top auction houses. While the Rolex and Patek Philippe collecting craze shows no sign of waning yet (or possibly ever), there are signs that collectors—even the important ones—have a growing interest beyond the usual suspects.

“Because collectors used to only want Rolex or Patek, these watches are the names that sat in drawers and they are masterpieces,” Selch says. “Many of these watches had really been used for parts or for gold weight for years—now the models that are intact are recognized and sought after.”

A few of the highlights, according to Selch and Wind, include a Zenith timepiece made for the Roman retailer A. Cairelli—a distributor to the Italian military—that is in mint condition and was likely issued to the airforce, but ultimately sold as a civilian timepiece. Another is a Universal Geneve Polerouter sub from the 1960s—one of less than 20 known to the market that are real.

“Universal is generally known for its chronographs and time-only watches, so this is almost on the level of a prototype or test watch for diving,” says Wind. “I think they did try it commercially, but my sense is that it didn’t thrive at launch.” In other words, it wasn’t particularly useful to the brand at the time, but its rarity and historical provenance as a test-run into dive watches by the brand make it a collectible timepiece.

There is also a Universal Geneve “Eric Clapton” up for grabs. The watch earned its nickname because it was the watch the musician wore when he was the frontman for Cream. This one is an early Mark I version with small pushers on a bracelet in very good condition.

There’s also an early Zenith El Primero, which is worth getting your hands on, especially since the brand issued some very limited versions in honor of the El Primero’s 50th anniversary this year. If you’re a car enthusiast, you might want to check out the Eberhards. “They are a brand that’s gaining a lot of interest,” says Wind. “Their chronographs from the ’30s to the ’50s were popular with Italian race car drivers.”

Why You Should Get in on This:

Because interest in watches has grown exponentially on the international stage, many of these models, which were once easily attainable through eBay or small dealer sites, have been swiped up over the last 8 years. In the way that a Rolex Daytona might have cost under $1,000 in the ’70s, these timepieces could have long-term value as more collectors get in on the game.

“Greg and I both thought the market needed sort of a liquidity injection for people to see these things, which haven’t come up in many years,” says Wind. “We want people to have an opportunity to buy them and for watch collecting to not just be an elitist thing.”

That being said, once Selch sells off 98 of these timepieces he’ll have a nice chunk of change to further feed his hobby, but he says he isn’t in the market because he just found “the one that got away”: a 1970s Blancpain Fifty Fathoms dive watch with a cushion shape.

What You Need to Know About Servicing Vintage Watches:

So you bought a beautiful timepiece, but given the fact that it is likely decades old, it may come with some added costs. Vintage watches need more servicing than new watches, so you should make sure you’ve already located the best watchmaker in your area. If you’re in New York, Wind recommends Grand Central Watch. You also shouldn’t buy a vintage timepiece for daily wear and you should never keep them on a winder. “It would be like having a vintage ’30s car and trying to use that as your daily drive—that wouldn’t work very well.”

Their parts, much like a car, can get worn out from wear over the years so you need maintenance in order to keep them going. “If you had a car that was 50 years old and it cost $500 to get running and you could drive it for a few years, that would be an incredible automobile,” adds Selch. “These are as amazing as that—tiny machines built for your wrist.”