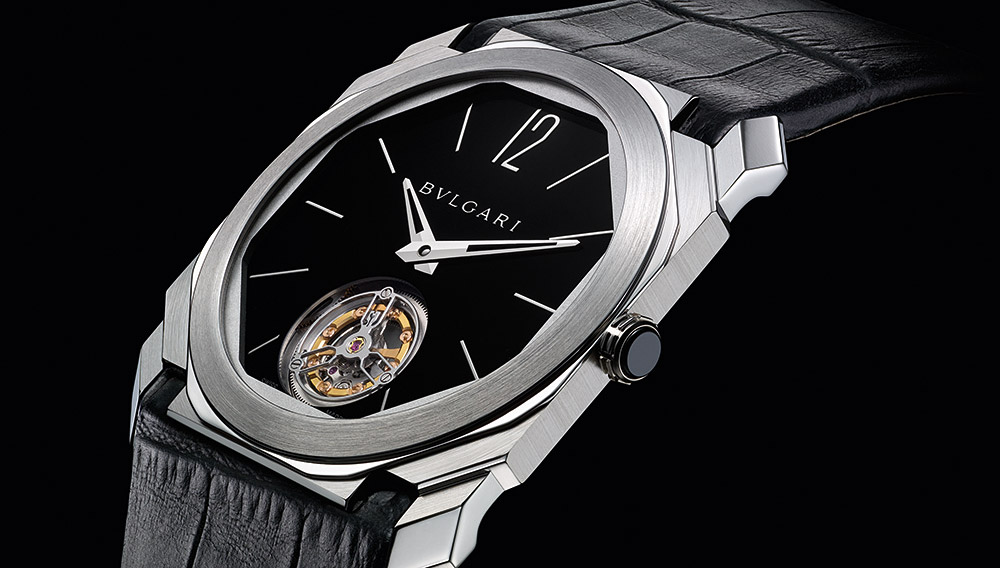 While new watches abound at Baselworld—the industry’s largest jewelry and watch show, which ran this year from March 27 through April 3—the collectors and retailers who attended did not necessarily have an easy time finding the next must-buy timepiece. As is often the case at the annual show, the novelties presented by many brands were largely composed of “new animations,” as the Swiss describe the line extensions that populate their new product offerings. Of the truly new products introduced in any given year, the majority are merely pretty. Only occasionally does a watch display the promise of changing the business of its maker. Out of the hundreds of watches shown at Baselworld 2014, only four caught our attention for not only being outstanding but offering us a deeper understanding of watchmaking in the year 2014. Details on those four watches are on the following pages. (www.baselworld.com)

When Bulgari redesigned and relaunched its Octo line two years ago, with its eight-sided bezel and aggressive, angular case, the piece made an impression as a creative and capable reinterpretation of a classic example of legendary designer Gerald Genta’s work. It was also clear that the model would only appeal to a wearer with a bold enough style to carry its extreme lines and bulk. This year the brand presented two revised Octo Finissimo watches. Both the tourbillon and seconds versions are approximately 5 mm thick. The company, with some fanfare, proclaims its tourbillon movement to be the thinnest on the market, which is naturally an impressive achievement. Octo Finissimo, however, is really a design achievement rather than a technical one. In a stroke, Bulgari has transformed Octo into a modern dress watch with much wider appeal. Its once overpowering, angular lines are now a flourish that would not look out of place on one of the Vacheron Constantins of the last century that are regarded as classic examples of watch design. (us.bulgari.com)

Although it might easily stand on its own as a singular launch, Arnold and Son’s CTB, a chronograph with a dead-beat seconds hand on the same axis as the chronograph hand, is merely the most interesting of a number of new watches from the brand, which all feature brand-new, in-house movements. The extensiveness of Arnold and Son’s development capacity, which became visible last year, is now fully apparent and clearly rivals the activity taking place at much larger brands. Although set up with its own staff and premises that create exclusive movements, Arnold and Son’s technical savior faire flows from the renowned movement specialist La Joux-Perret, which over the last decade has consistently impressed experts with its ability to execute creative movements.

Like other recent Arnold and Son watches, the CTB includes references to the historically significant work of the brand’s namesake, John Arnold. But at the direction of Sebastien Chaulmontet, the brand’s head of development, these touches are limited and are not allowed to interfere with the forward-looking aspects of the brand’s design, which are expressed in contemporary Swiss movement finishes. The approach has received mixed reactions. Some regard the brand as a virtual candy store of haute horlogerie. Others, however, see the modern Swiss elements as a dilution of what might otherwise be a truly individual watchmaking expression. (www.arnoldandson.com)

At the last Baselworld, the output of the boutique watchmaker Manufacture Royale was a strictly technical affair. All of the watches featured dial-free, openwork designs, and the flagship tourbillon model was cased in a complex and bulky system of articulated lugs. A year later and under new management, the company has transformed its tourbillon into a gorgeous piece of watchmaking, which contains the DNA of the old model but is essentially an about-face. Conceived by the designer Eric Giroud, the new 1770 model wraps a separate lug assembly, a vestige of the old design, around a flared case. The notes of technicality seem to perfectly balance the voluptuous case and sword-shaped hands. The brand plans an entry into the U.S. market sometime next year. (www.manufacture-royale.com)

Over the last decade, Maurice Lacroix has made the journey from classical Swiss designs to ultramodern ones and back again. It has also made a foray into the watch industry’s luxury sector and subsequently returned to its roots in the moderate price ranges. This time, however, it seems to have acquired something on the way. The new Masterpiece Gravity is a remarkable-looking timepiece with a state-of-the-art silicon escapement for the astonishingly low price of less than $14,000. It does not take an especially astute observer to note that the design is clearly derivative of Audemars Piguet’s series of openwork timepieces beginning with the Tradition d’Excellence Cabinet #5. Borrowing of designs is a very old part of the Swiss watch industry; the more important lesson comes from Maurice Lacroix’s ability to execute the watch at such an attractive price. It is a lesson that Swiss companies, which have long relied on their sense of design to justify their high prices, would do well to heed. (www.mauricelacroix.com)