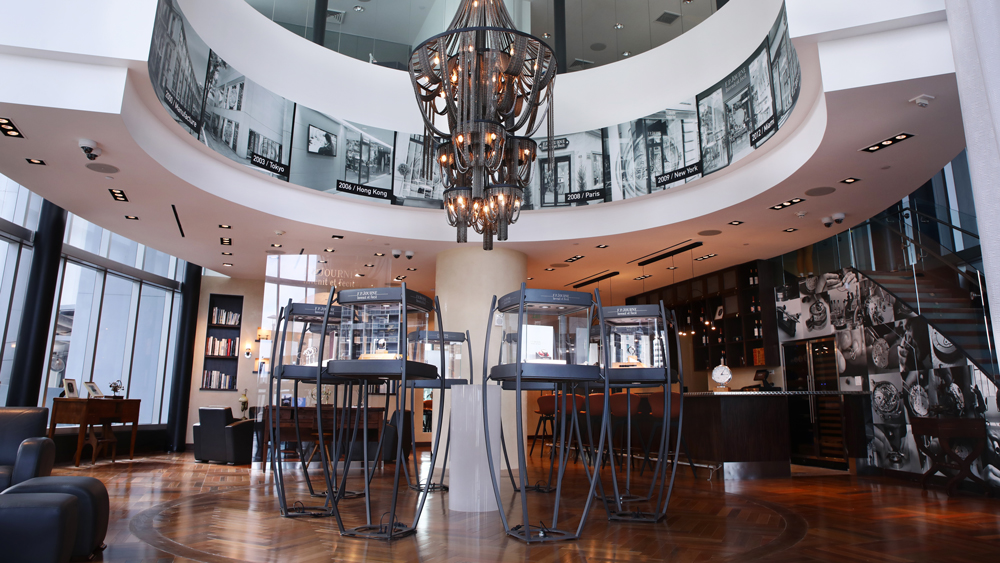 If you happen to find yourself in Miami surrounded by downtown’s towering skyscrapers instead of taking a dip in the waves, you might take a time out to take in Swiss watchmaker F.P. Journe’s new bar and boutique in the stylish Kimpton Epic hotel. The new two-story concept boutique has a leg-up on the other experiential efforts put forth by other watchmakers. It combines all of the serious Swiss craftsmanship of F.P. Journe’s high-horology with the laid-back attitude of a waterfront destination complete with a public bar and an outdoor lounge overlooking Biscayne Bay.

This is no ordinary cocktail endeavor—Pierre Halimi, general manager of Montres Journe America,  tapped veteran spirits expert and founder of The Liquid Projects, Jennifer Massolo to create the menu selection at Bar Journe. “I developed this program to reflect F.P. Journe as a brand, so we have some rare, unusual, and very well-made spirits,” says Massolo. “But we also have some brands people can recognize, but our Tanqueray is Tanqueray 10 and our Grey Goose is VX.” The rare and unusual liquors include everything from a Soviet-era Moskovskaya vodka and pre-embargo Cuban rum, which Massolo has sourced from dusty bottle hunter Edgar Harden, to a Suntory Japanese Whiskey from the ‘80s and a 1968 Jose Cuervo Tequila. “We received a bottle of Four Roses Single  Barrel 1990’s yesterday which we tasted against its current day distillation,” says Massolo. “A fascinating difference!”

For those that don’t drink, the bar has other elite concoctions in store like an $35 raw Pu-erh tea made in three steeps and served with a chocolate mendicant from Garcia Nevett, plus Petrossian caviar and Jamón Ibérico.

While access to one of the 10 seats at the bar is a first-come-first-serve operation, guests can buy a membership that allows reservations, in addition to lockers for personal bottle storage, and access to special events. But if you can’t score a perch at the bar, step outside to take in the balmy Miami breeze and watch the yachts roll by in the bay as you kick back in one of two lounge areas with a cigar lounge designed by Astilleros Astondoa. While you’re out there try one of Massolo’s special cocktail recipes. “Tobacco Road includes Bruichladdich Classic, Agrosan Amaro del Etna,  Vergano Marascino and a drop of salt water,” says Massolo. “It’s a superb accompaniment to one of our fine cigars!” Collectors were already gathering bayside, comparing timepieces and sipping on Massolo-sourced cocktails when Maison F.P. Journe opened in February during Watches & Wonders.