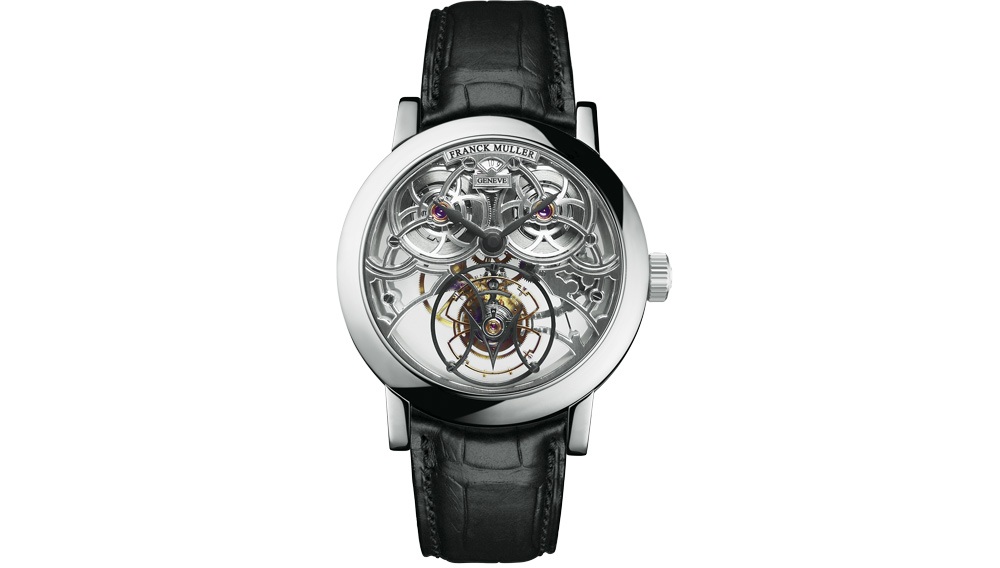 Franck Muller leans on its in-house talent to push the limits of its tourbillon watches.

For Pierre-Michel Golay, master watchmaker at Franck Muller Watchland, making a new wristwatch means setting a new benchmark. Asked to create a timepiece “with a lot of hands,” he spent half a decade developing the massive, 36-complication Aeternitas Mega 4. “I had always wanted to make a very complicated watch,” he says, recalling the genesis of his 2009 magnum opus. “I suppose I got carried away.”

So when CEO Vartan Sirmakes decided to follow up the Mega 4 with another superlative in the tourbillon field, he knew that Golay and Watchland’s engineers would not let him down. Golay vowed to create the largest tourbillon cage that could fit inside Franck Muller’s signature Curvex case, which he calculated would result in the biggest tourbillon the world had ever seen.

Even as Golay began to sketch out the movement—drawing bridges and gears by hand—he and his team knew that the greatest challenge would be power. A huge tourbillon, even if made of lightweight titanium, would require four mainspring barrels to provide enough power reserve for reliable timekeeping. By stacking his barrels in pairs, Golay optimized both energy and space, achieving a power reserve of nine days and allowing the tourbillon diameter to be expanded to an unprecedented 20 millimeters. (A standard tourbillon cage is roughly half that size.) Dubbed the Giga Tourbillon, this achievement drew the attention of watchmakers and collectors when it was released in 2011.

Golay has found that the larger tourbillon has timekeeping advantages: “With a bigger balance wheel, there’s more accuracy,” he says. Still, the main impetus for the Giga was aesthetic. “The 10-millimeter tourbillon was very popular in the ’90s, but today it has lost its glamour,” explains Franck Muller director Nicholas Rudaz. “We wanted a more visually striking tourbillon.” The Giga’s skeletonized movement—which is mounted upside down to show off the bridges, mainsprings, and tourbillon cage to maximum impact—ensures that the tourbillon regains the attention the brand attracted when Franck Muller was first launched.

And if the company is producing the biggest tourbillon, then why not also the smallest? With the Lady Tourbillon, Golay and Watchland’s engineers had an opportunity to set another record, but they had to first overcome a wholly different set of challenges. For instance, the diminutive heart-shaped tourbillon cage had to be machined in titanium, not because of weight but because the wire was so thin that a less elastic metal would have deformed. They also had to be attentive to the escapement itself. “Within the small cage, we made the balance wheel as large as possible,” Golay says. “The watch must be accurate.”

Around the same time that the Giga and Lady Tourbillon were completed, Golay’s cousin and protégé Jean-Pierre Golay came to him with a new idea: a rearrangement of traditional escapement gearing to make a tourbillon spin extraordinarily quickly. In prototypes, Jean-Pierre succeeded in making the cage rotate every 6 seconds, 10 times faster than an ordinary tourbillon. But then Watchland learned that a competitor was developing an equally speedy tourbillon. Sharing his older cousin’s competitive ambition, the younger Golay promptly adjusted the gearing to spin his tourbillon a record-breaking 12 times per minute.

Released in 2014, the Thunderbolt Tourbillon uses four barrels and a titanium cage like the Giga, but extreme speed requires more than just enormous power. Golay and his team increased the escapement frequency to 3 hertz compared to the 2.5 hertz frequency used in other Franck Muller tourbillons. And the cage turns on ceramic bearings to mitigate friction, ensuring that the whirlwind does not wear out or rip itself apart.

“The speed has an incredible effect aesthetically,” says Rudaz, noting that visual spectacle was Watchland’s motivation for making the timepiece. “Next to a Thunderbolt an ordinary tourbillon looks incredibly dull and slow, and next to a Giga an ordinary tourbillon looks minute. From the beginning, Franck Muller pushed the limits of design and creativity. We are working in the same spirit today.”