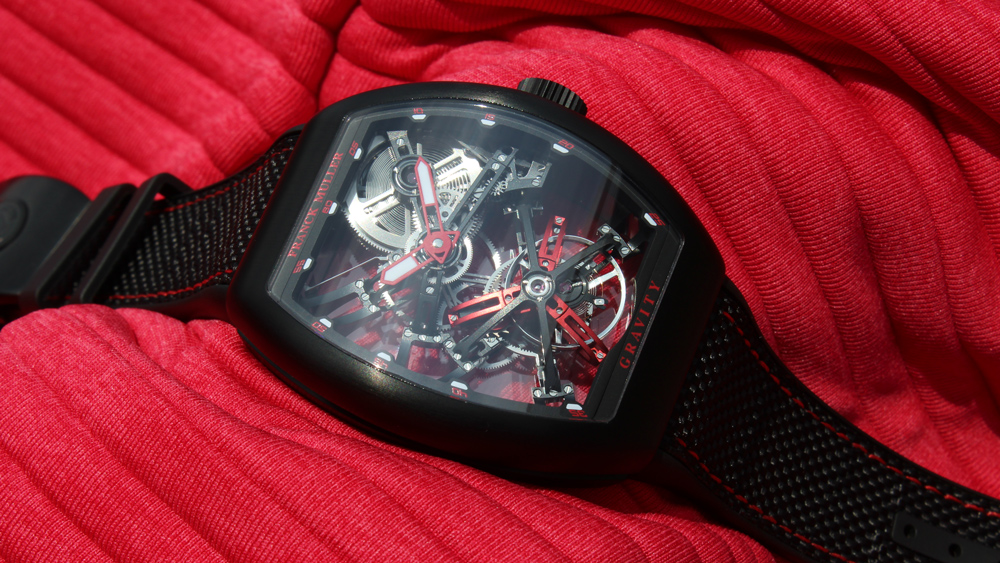 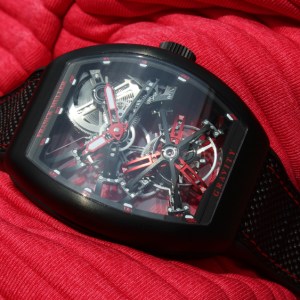 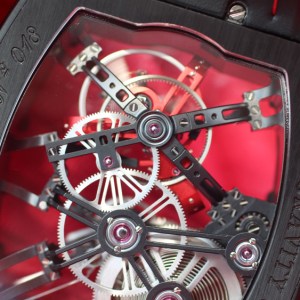 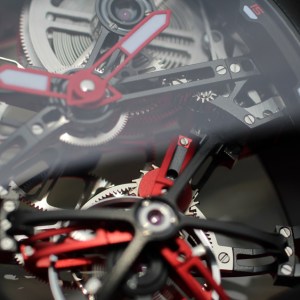 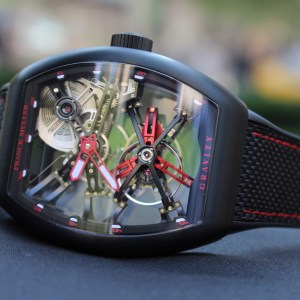 Franck Muller’s watches, if nothing else, have always skewed outside the norms of conventional watchmaking. For the most part, his collections use variations of a tonneau-style case, dubbed by Franck Muller as the Cintrée Curvex. The brand’s extensive model range includes everything from range topping Grande Complication models like the highly complex Aeternitas to the newly launched Gravity Skeleton seen here ($130,000).

It’s also responsible for an oddity known as the Crazy Hours, a timepiece with a jumping hour hand where the hours of the day aren’t displayed in sequence (specifically, they appear as 8, 1, 6, 11, instead of 1, 2, 3, 4).

This latest creation brings a much more sparse and serious feel to the table in 2017, and with so much competition in the category of over $100k time-only tourbillons we thought it wise to take a closer look for this week’s installment of Watch of the Week.

There’s much to take in while examining the Gravity Skeleton. It uses the lugless case construction we’ve seen before in the brand’s Vanguard collection. From its side profile, you can see it has a 3-piece design, with the center portion being finished in red diamond-like carbon (DLC) coating to match its red hands and red anodized aluminum tourbillon cage. Thanks to the size and curvature of its case, the brand’s movement designer was able to incorporate beautiful three dimensional forms to the movement’s architecture, including the significant arcing x-shaped bridge that supports its orbiting tourbillon.

The entirely in-house designed and manufactured caliber is a manually-wound unit with a five-day power reserve. A key part of its movement design was intended to keep its tourbillon front and center—a task we would argue they achieved in spades. Thanks to an off-center balance wheel, the tourbillon follows an elliptical trajectory (21.2mm in diameter) with every rotation, with its bright red cage providing ample contrast against its DLC bridge.

Though its crown does screw down, the Gravity Skeleton has a water resistance of only 30 meters. From a movement design standpoint, the new piece is certainly one of the more appealing we’ve seen lately.  Skeletonized movement are very much hit-and-miss in terms of design, and in this case the brand’s thoughtful hand made all the difference.

Franck Muller’s latest is a casual creature, to say the least. Color pairings aside—especially considering the Gravity Skeleton can be had with red, blue, or yellow accents, in full black (not to mention brushed titanium and gold)—we see the piece as another that’s best left to doing all the talking.

A custom pair of Tod’s driving shoes with a matching colored sole wouldn’t be a bad choice, though we could even see a match with Billy Reid’s latest K-Swiss collaboration in distressed black leather. Further to this, the understated aesthetic of Ermenegildo Zegna’s recent Second Skin capsule collection is in the right vein of understated to match with the Gravity Skeleton as well.

The Gravity Skeleton is just starting to arrive in Franck Muller retailers this month, priced from $130,000 depending on the model chosen.