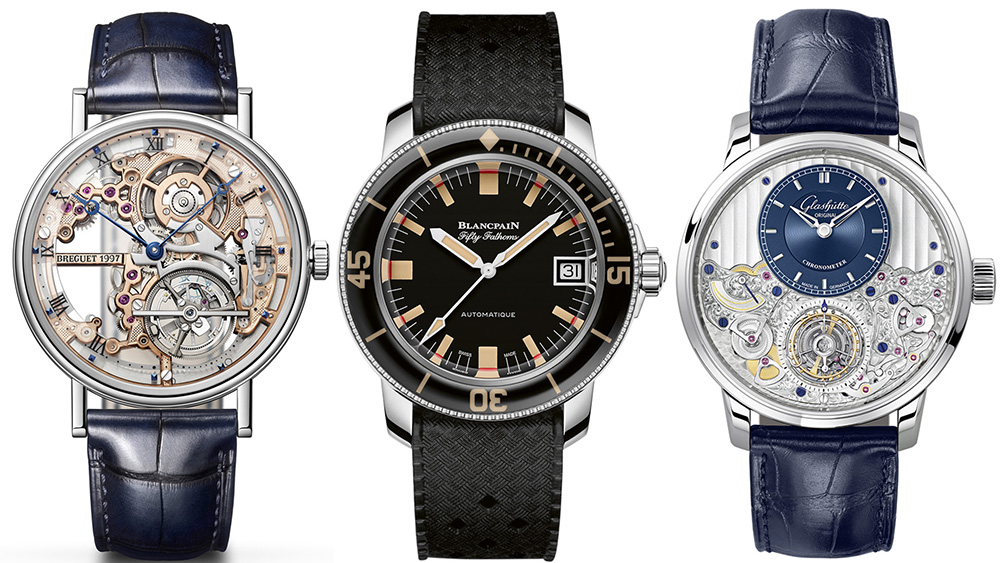 Switzerland’s largest privately-owned watch conglomerate, the Swatch Group, unveiled its 2019 watches in Geneva to a small group of journalists during its newly minted press event “Time to Move.” The event was created after founder Nick Hayek decided to pull the entire group out of the annual Baselworld watch fair, which has recently been in decline as brands try new approaches to reaching retailers, clients and press.

Robb Report was included among the group of international publications invited to attend the highly anticipated event, which involved press tours of all the Swatch Group prestige brand’s manufactures. Here are some of the highlights from each brand, but stay tuned as we roll out full coverage of the collections.

Blancpain’s iconic Fifty Fathoms timepiece is hotter than ever in both new models and on the secondary market, so it’s not surprising that one of their most covetable releases came in the form of its famous diver model. The new Barakuda Fifty Fathoms is based on vintage models that were supplied to the German Bundesmarine in the ’60s by Barakuda—a company that specialized in technical diving equipment. (The first Fifty Fathoms model, created in 1953, was supplied to the French Frogmen.)

The new model looks nearly identical to the original, which was also made for German civilians in the ’60s, but comes with crisper two-tone rectangular hour markers accented with radium-type SuperLuminova and a sharp hour marker highlighted in white. What’s new is the uni-directional bezel with scratch-resistant domed sapphire, first unveiled by Blancpain in 2003. The 40mm watch (limited to 500 pieces) houses the calibre 1151 self-winding movement, is water resistant up to 300 meters and comes in a steel case on a tropical rubber strap.  A ’70s-era Barakuda model sold at Phillips last year for CHF 16,250 (approximately the same in dollars at the time of the sale) at the Geneva Watch Auction Seven. You can expect the new model ($14,100, limited to 500), as well as the vintage ones, to continue to climb in value.

June 26th will mark 218 years since Abraham-Louis Breguet first invented the tourbillon to counteract the effects of gravity in a watch. Today a tourbillon serves as a piece of art meant to flex the technical expertise of a brand’s watchmakers, as well as serve as a fancy focal point on the face of a timepiece. In Breguet’s new Classique Tourbillon Extra-Plate Squelette 5395, the tourbillon—offset at 5 o’clock—is highlighted in the 581 caliber in the form of a skeleton timepiece.

The new architecture called for the removal of almost 50 percent of the original movement—the remainder has been constructed in 18-karat gold. (For the record: the first time Breguet made an almost entirely gold movement was on Marie Antoinette’s pocket watch commissioned in 1783 and completed 26 years after Breguet invented the tourbillon in 1801). The extra-thin caliber has a thickness of just 3mm, making for a lightweight timepiece despite its platinum case and rose gold movement. It has 80 hours of power reserve and a barrel beating at 4 Hertz. These pieces will go for CHF 220,000 in rose gold and CHF 235,000 in platinum.

This piece is stunning in person and certainly the most ornate creation in Breguet’s current lineup.

One of the most anticipated watch releases of the year was Omega’s Speedmaster tribute for the 50th anniversary of man’s first steps on the moon. (Although Neil Armstrong was the first man on the moon, he left his Omega Speedmaster 105.012 behind in the space module. Buzz Aldrin wore his Omega onto the surface of the moon at 03:15:16 UTC on July 21, 1969—to date he remains the brand’s most important ambassador.) Unfortunately, it was a somewhat lackluster release for such a monumental anniversary.

The 50th anniversary Speedmaster has many of the design features of the original, save for two glaring differences: the chronograph subdial at 9 o’clock has been replaced with a miniature rendering of Buzz Aldrin descending from The Eagle. For hardcore moon-landing enthusiasts, this feature probably won’t deter a purchase, but the cartoonish rendering takes away from the otherwise wonderfully utilitarian and straightforward designs that built the brand’s name. The second difference is a footprint-shaped engraving on the case back, dug out of a black-coated plate that mimics the texture of the moon’s surface. It’s encircled by Neil Armstrong’s famous saying, “That’s one small step for a man, one giant leap for mankind.” There’s nothing particularly wrong with that, but wouldn’t it have been so much better if it had neither of these gimmicks? To top it off, the watch is not particularly limited. The 42 mm by 13.89 mm-thick, steel timepiece ($8,900) comes in a run of 6,969 pieces.

What is nice about the watch is its vintage style bracelet, which not only looks great but feels great to the touch and on the wrist. The dial also has a unique gray color that has a hint of blue in person. But because of the superfluous details, the moon watch winner of the year may be Omega’s earlier release: the Moonshine Gold Apollo 11 Anniversary timepiece. The limited edition of 1,014 pieces debuted in March with a design based on a model gifted to astronauts (and President Nixon) at a dinner to honor their achievement in Houston on November 25th, 1969.

German watchmaker and Glashütte native Alfred Helwig was known for creating the flying tourbillon as we know it today—anchoring it only on one side to give the appearance of weightlessness. So it’s no surprise that Glashütte’s most impressive timepiece this year is dedicated to the invention. The Senator Chronometer Tourbillon (limited to 25 in platinum, $152,300) boasts a flying tourbillon with a stop seconds mechanism—with a zero reset and minute detent—activated via the blue enamel crown. The tourbillon can be stopped mid-flight when the crown is pulled out, which also stops the second hand mounted on the cage.

The Teutonic watchmaker is touting its tourbillon as the most accurate on the market. It has two patents pending and took more than 8 years of development led by its in-house female watch designer. It comes with 70 hours of power reserve, indicated at 9 o’clock, with a tourbillon with one barrel and is chronometer certified (by the German Calibration Service in Glashütte, not the standard Swiss COSC certification). It has an extraordinary amount of finishing on the movement visible on its lower half and through the caseback and, when tilted at the right angle, reveals “Chronometer Tourbillon” which appears to be printed inside the top half of the interior of the case but is, in fact, a mirror effect reflecting the phrase which rests on the outer circumference of the hour and minute dial.

But for the man who’s looking for something less ornate in his dress watch, the Senator Chronometer (above right in rose gold, $24,300), first launched in 2009, is a sharp, pared down offering inspired by Glashütte marine chronometers from the 19th and 20th century.

Jaquet Droz is known for its extraordinarily intricate métiers d’art and automaton pieces, but its classic dress watches for men have plenty of appeal in the brand’s figure 8 design—equally inherent to its DNA. Its Grande Second collection is presenting the design for the first time in a chronograph and features an off-center layout in blue and gray dials in steel cases ($19,400) save for the rose gold version in a vertical layout with a Grand Feu ivory enamel dial ($33,000, limited to 88). In the 43mm steel versions, the dials are finished by hand using a dry sand-blasting technique to accentuate the graining. The blue and gray tone dials are not only standouts, but also the first time these exact colors have been used on dials by Jaquet Droz. Each piece features a monopusher, at 4 o’clock in steel and 3 o’clock in rose gold, to preserve a minimalist design.

Harry Winston presented so many different watch skews this season, picking just one seems like a monumental task. So here we’ve picked two wildly different models to present the breadth of the collection.

First up, is the grandiose Histoire de Tourbillon 10. The first Histoire de Tourbillon was launched in 2009 and the tenth version will be the last of this limited-edition series. The watch comes with a whopping four distinct tourbillons in a piece comprised of 673 components encased in a gigantic 53.3 mm-wide by 39.1 mm x tall case made predominately of sapphire crystal. It sits like a glass box on the wrist. Despite the durability of sapphire crystal, it seems like a rather precarious piece for the wrist at $770,000 (the price of the unique platinum piece) but then again, this is clearly not a piece you’ll be running your errands in.

In addition to its four separate symmetrically aligned tourbillons, the piece also has three differentials and two double spinning barrels. This piece is practically a mini-museum exhibition case for the wrist to show off Swatch Group’s technical savior faire. In addition to the singular platinum version, it will also come in red gold and white gold, limited to 10 pieces each. Clearly it’s not for everyone, but that’s the point.

If you’re in search of something more discreet, the new Harry Winston Emerald 33 watches are a really nice introduction from the brand. In an octagonal rectangular shape, also known as an emerald cut in the world of diamonds, this case was previously only available in small sizes for women. The new 33mm case works for both a man looking for a smaller, sleeker watch and a woman looking for something that will stand out on her wrist—initial reactions among the group assembled for the Swatch Group preview suggested it appealed to both men and women in the room. The watch comes in both automatic (approximately $18,000) and quartz (approximately $14,000), as well as diamond-bezel versions (around $22,000).

There were plenty of other stellar gem-set timepieces—including a kaleidoscope pendant (with actual gems to create the mosaic motifs) that doubles as a watch—so stay tuned. Harry Winston also revealed that it’s currently working on a new Opus timepiece, developed with an independent watchmaker for the last three to four years. The watchmaker hasn’t unveiled a new Opus since 2015, but there is no word, and reportedly no rush, on its release date yet.