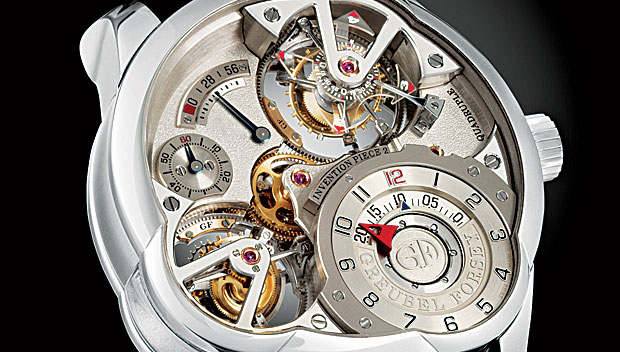 Collectors probably will not mind that the new Greubel Forsey Invention Piece 2 (www.greubelforsey.com) contains a mechanism the Swiss watchmaker initially unveiled several years ago. After all, that mechanism is a quadruple tourbillon, the company’s most complex and accurate creation. The Invention series also features architecture and finishing that are completely different from those displayed by the rest of the company’s timepieces. This particular watch from the series—priced at about $800,000 and limited to 22 examples (11 in platinum and 11 in red gold)—has a triple-barrel mainspring driving the two double tourbillon carriages, which are linked together to provide greater accuracy. A rotating arrow-and-disk time display adds a modern touch that seems fitting for such an unorthodox concept.