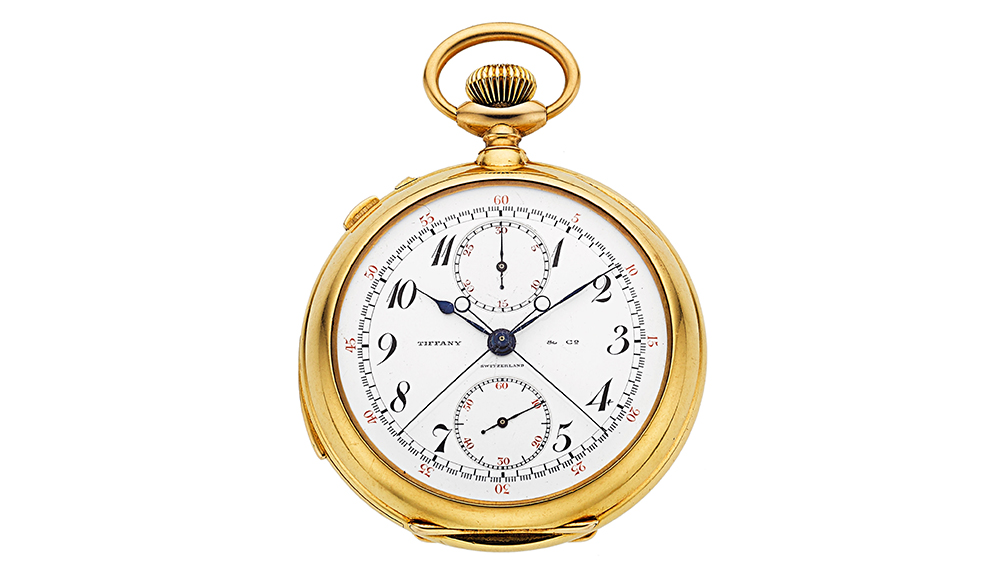 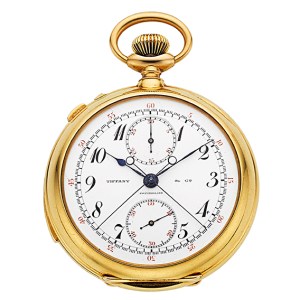 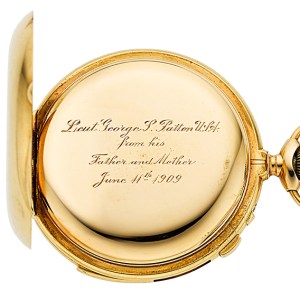 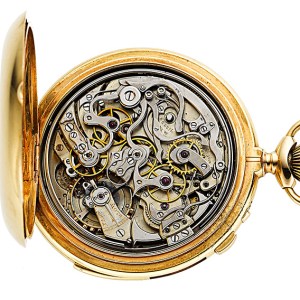 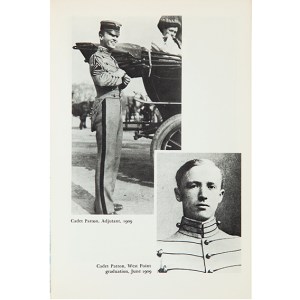 NEW YORK – The 1909 Patek Phillippe pocket watch given to General George S. Patton by his parents upon his graduation from West Point Academy, which Patton carried while fighting against Pancho Villa and during his time in the U.S. Army World War One tank corps, will cross the auction block on Oct. 29, 2015, at Heritage Auction in New York.

“General Patton’s relationship with his parents, and especially with his father, George S. Patton II, was very close,” said Jim Wolf, Director Fine Timepieces at Heritage Auctions. “Their devotion is reflected in the high quality of the piece and the inscription on the cuvette of the watch: ‘Lieut. George S. Patton USA/from his/Father and Mother/June 11th 1909.’”

The watch, which has been consigned by one of Patton’s descendants, comes with a signed letter of provenance stating, in part: “The watch remained in General Patton’s possession until his death in 1945. It was given to me by his son, my father, Maj. Gen. George S. Patton IV, in 1987.”

“After carrying the watch on active duty,” said Wolf. “Patton kept it stored in the North Shore Boston house he and his wife purchased in 1928. It spent more than eight decades in the General’s house before it passed to the present owner.”

In his memoirs titled “My Father As I Remembered Him,” dated July 9, 1927, Patton writes about the day he got the watch: “The day after graduation Papa, Mama and I went to Tiffany and they bought me a watch. It was a stop watch repeater priced at $600.00 but we got if for $350.00 because it was thicker than the then style. I carried it in Mexico and France, it keeps perfect time and is a great watch. Aunt Nannie bought me a chain to go with it. B gave me the locket.”

“The importance of this watch and its appearance at auction is hard to overstate,” said Wolf. “This beautiful piece was beloved by one of America’s greatest military heroes and deserves a place either in a museum or in the possession of the most elite of collectors.”

Heritage Auctions is the largest auction house founded in the United States and the world’s third largest, with annual sales of approximately $900 million, and 900,000+ online bidder members. For more information about Heritage Auctions, and to join and receive access to a complete record of prices realized, with full-color, enlargeable photos of each lot, please visit HA.com.