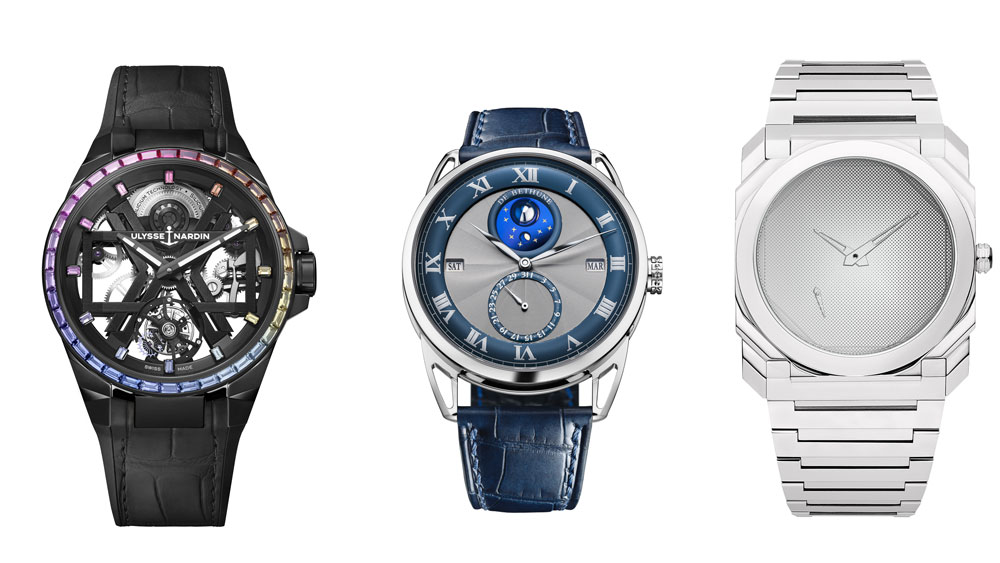 Geneva Watch Days began in the summer of 2020 as an ambitious yet uncertain effort to bring the Swiss watch industry together during the anxiety-riddled early months of the pandemic. Two years later, the decentralized gathering has blossomed into a bona fide event on the luxury watch calendar, with around 40 brands taking the last few days of August to exhibit their newest models at hotels, boutiques and manufactures around the city.

At this year’s showing, a few themes emerged, from the new favored case material (“Gold is back,” Edouard Meylan, CEO at H. Moser & Cie., tells Robb Report) to a growing embrace of minimal, modern styles that suggest the reign of vintage-inspired design may be nearing its natural conclusion.

Below, we highlight a few of our favorite timepieces from the slew of collections unveiled in Geneva.

In 2014, when Bulgari introduced the hand-wound Octo Finissimo Tourbillon, a 5-millimeter-thick titanium watch with a round bezel and octagonal case, its success was not a foregone conclusion. Today, less than a decade since that auspicious introduction, the Octo Finissimo series, overseen by designer Fabrizio Buonamassa Stigliani, has earned raves for its design and technical mastery as well as several world records for thinness. The latest entrant in the collection, the Octo Finissimo Skeleton 8 Days, comes in a sleek 40 mm satin-polished 18k rose gold case that houses a new hand-wound manufacture movement, the extra-fine calibre BVL 199 SK. With its 8-day power reserve and precious packaging, the timepiece upholds the Finissimo tradition of combining watchmaking prowess with streamlined design. Molto bene! $37,300, Bulgari.com

The starkness and simplicity of the Octo Finissimo Sejima Edition designed for Bulgari by Japanese architect Kazuyo Sejima are sure to thrill lovers of minimalist style. The Pritzker Prize-winning architect had a sapphire crystal dial polished to within an inch of its life, achieving a mirror effect that plays with notions of transparency. Available in a 360-piece limited edition, the model features both figurative and literal Sejima signatures: The architect’s metalized dot pattern graces the dial, while her name appears in distinctive lettering on the transparent caseback of the 40 mm polished steel case. $14,100, Bulgari.com

Black-tie glamour meets high horology in the new Serpenti Seduttori Tourbillon. Both the watch’s 34 mm tear-drop-shaped white gold case and dial are entirely covered in white diamonds, in sharp contrast to the bezel, which is set with 7 carats of black spinels. Inside, a dainty mechanical tourbillon movement proves this beauty has brains. The study in contrast suggests “a bold determination to combine the mad rush of time with the immortal nature of precious stones,” as Bulgari’s marketing materials so beautifully describe it. $185,000, Bulgari.com

In the 11 years since De Bethune introduced the DB25 Perpetual Calendar, the piece has been housed inside a robust 44 mm case. Now, the model is available in a 40 mm titanium case, reflecting an industry-wide downsizing trend. Equipped with calibre DB2324V2, an improved version of the latest calibre DB2324, technically adapted to fit within the smaller case, the QP dazzles with its classic, perfectly proportioned bi-color silver and blue dial. With its guilloché pattern, spherical moonphase set beneath 12 o’clock and star-studded sky in blued titanium, inlaid with rose gold stars, the model proves good things do, indeed, come in small(er) packages. $145,000, Debethune.ch

In a striking sign that gold is the new steel, H. Moser & Cie. used Geneva Watch Days as the occasion to debut its popular Streamliner timepiece in a warm 5N red gold 40 mm case. “We had a wave of integrated steel bracelets in the past,” CEO Edouard Meylan tells Robb Report. “People want more value.” Of course, the precious metal isn’t the only material worth noting on the watch, which features a dial layered in Vantablack, a type of super-black coating invented by the nanotechnology industry for use in aeronautics. Moser first made use of the material on its 2018 Endeavour Perpetual Moon and applies it to the new automatic tourbillon to great effect. “It’s about the tourbillon flying and having this void around it, the Vantablack,” says Meylan. “There’s this mystic aspect behind the material. You cannot grasp it in a picture. The camera is not capable of finding the right depth because it cannot focus on anything. You have to hold in your hands.” 109,000 Swiss francs (about $111,500), H-moser.com

The new LM Split Escapement EVO marries two essential MB&F creations in one complicated yet sporty timepiece. The story of the split escapement begins in 2015, when the Northern Irish master watchmaker Stephen McDonnell conceived of a novel way to feature a large balance wheel on the front of an MB&F perpetual calendar while moving the remaining parts of the escapement — the anchor and escape wheel — to the opposite side of the movement (hence, the split moniker). His invention got its proper due in 2017 when the brand introduced the LM Split Escapement in its own right. Three years later, MB&F debuted the EVO case featuring 80 meters of water resistance, a screw-down crown, an integrated rubber strap, a bezel-free design and a movement suspended in a monobloc shock-absorbing “FlexRing” system. Now both the movement and case innovations are combined in the Icy Cool edition, which comes in a 44 mm grade 5 titanium case with a pale blue base plate and slate grey dial. A second Beverly Hills edition destined for MB&F’s new retail concept, MB&F Labs, opening on Rodeo Drive this fall in collaboration with Westime, features the retailer’s corporate colors of blue and black. Catch it if you can. $80,000, MBandF.com

When Ulysse Nardin introduced the radical-looking Freak watch in 2001, not only did the brand pave the way for a contemporary reinterpretation of watch design, but it also ushered in an era of mechanical sophistication thanks to its pioneering use of silicium, a material that has since revolutionized mechanical watchmaking by eliminating the need for lubricants like oil. In an homage to the material, and its array of colors comes the Blast Rainbow in a limited edition of 50 pieces. Housed in a 45 mm black ceramic and black DLC titanium case, the UN-172 manufacture automatic skeleton movement incorporates a flying tourbillon. But the real party is on the bezel, where 3.65 carats of baguette-cut rubies and multicolored sapphires create a dazzling rainbow effect. $89,700; Ulysse-nardin.com

Two new rainbow-hued iterations of the 2019 Lady Diver, one in white and the other in black (each available in a limited edition of 300 timepieces), transform this utilitarian sports watch, water resistant to 300 meters, into a crossover piece appropriate for evening wear. With 40 gems (including ruby, aquamarine, topaz, tsavorite and sapphire) decorating the watch’s concave unidirectional bezel and 11 diamonds adorning the indexes, you’re bound to catch the light, even down in the deep. $13,600; Ulysse-nardin.com