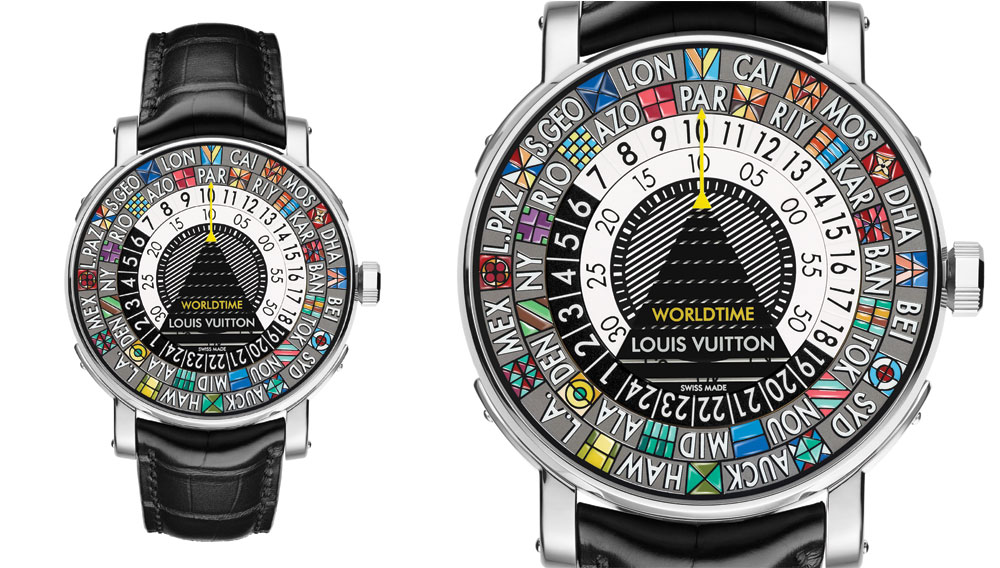 Louis Vuitton celebrates the launch of its new watchmaking facility with an original world-time watch.

As he inaugurates the new Louis Vuitton watch manufacture in Switzerland’s Meyrin district, Hamdi Chatti, the company’s vice president of watches and jewelry, claims he has little interest in either building an in-house base movement or increasing the output of new models—the two most typical goals for such a facility. The actual purpose for gathering Louis Vuitton’s far-flung watchmaking assets into the same building, he says, is to foster creativity. “By having everyone under the same roof,” he notes, “you have cross-fertilization, which allows us to be much more reactive and dynamic.”

Inside the complex, the brand has brought together its assembly operations (formerly located in La Chaux-de-Fonds), its dial maker, and the crown jewel it purchased in 2011, the complication specialist La Fabrique du Temps. Among the immediate benefits Chatti envisions are improved prototyping capabilities and the ability to work across disciplines, such as using dial treatments on movement parts. But the most significant advantage is his small creative team’s improved workflow, which greatly benefited one of the first models produced at the brand’s new campus: the Escale Worldtime.

“As a travel-themed company, obviously the world-time complication was incredibly important for us,” says Chatti, “but we had to give the watch as much of a Vuitton look as possible.”

Because Chatti’s team was afraid that the world-time function, which displays major destinations in 24 time zones around the world, would be too reminiscent of the seminal mid-20th-century timepieces created by Louis Cottier—most notably for Patek Philippe—the complication experts Michel Navas and Enrico Barbasini suggested they eliminate the hands. The system they devised consists of rotating concentric rings displaying the minutes, hours, and destinations—all adjustable through the main crown.

The designers consulted the company archives for decorative inspiration and—in a nod to the graphic work of Gaston-Louis Vuitton, who produced similar crests for his clients’ families—decided on fanciful heraldic insignia to represent the watch’s different locales. Each blazon is hand-painted—a treatment the combined teams were able to agree upon thanks to the tolerances of the mechanism. “We found the solution in just two hours,” says Chatti, “all because everyone was around the same table.”

As the brand moves forward, Chatti cites the Geneva location of Vuitton’s new facility as key to future watchmaking activities. “Geneva is the center of watchmaking,” he says. “Creating a watch bearing the Geneva Seal would be the cherry on the cake.”