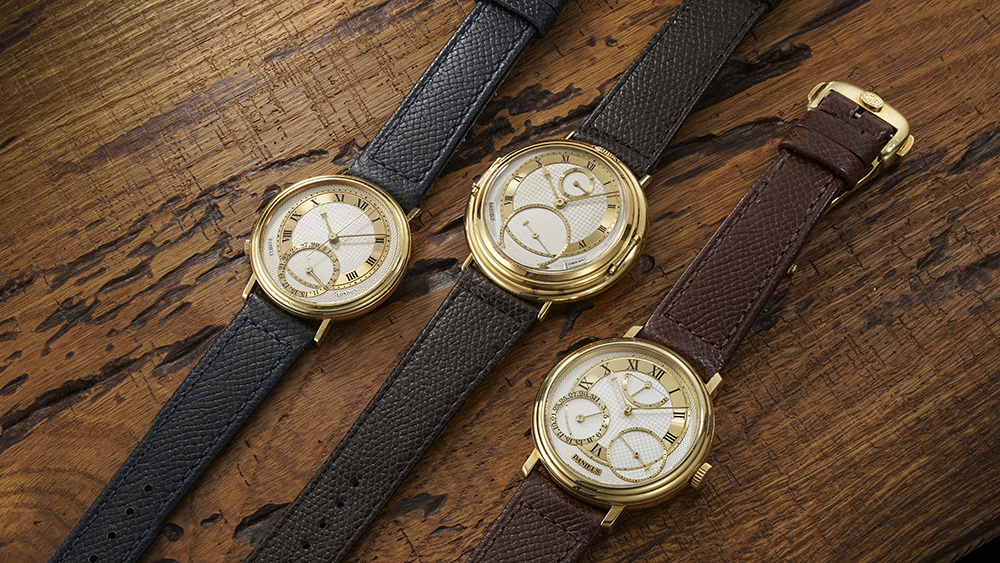 A trio of timepieces by the founding father of independent watchmaking will be up for grabs this fall; including one with a unique case that is debuting on auction for the first time ever.

On Thursday, Phillips in Association with Bacs & Russo announced that the pieces, designed by the late George Daniels, will be offered at the house’s Geneva Watch Auction XVI, scheduled for November 5 to 6. The trip includes yellow gold Anniversary and Millennium wristwatches, as well as a unique Spring Case Tourbillion. These exceptionally rare pieces will first go on display for all to see during Geneva Watch Days from August 29 to September 1.

The front and back of the unique Spring Case Tourbillion by George Daniels.  Phillips

The English horologist, who produced only a few dozen handmade pocketwatches and wristwatches during his lifetime, is also known for his collaboration with Roger Smith, another notable independent watchmaker. Together they made two tourbillion wristwatches and two production series models. The latter spawned the limited-edition Millennium and Anniversary timepieces in the sale, both practically mint condition.

The yellow gold Millennium watch was the first of the two series models Daniels created in 1999. It was released in an edition of 48 pieces and was meant to mark the year 2000, as well as to celebrate the arrival of the new Co-axial escapement to the market. Alongside the new mechanism, the watch features a modified Omega calibre and the watchmaker’s distinct guilloche dial. The Millennium watch headed to auction is estimated to fetch between CHF 250,000 and CHF 500,000, which is around the same amount in US dollars.

Daniels’s second series model, the Anniversary watch, was later released in 2009. The yellow-gold piece was produced in just 35 examples to celebrate the 35th anniversary of his renowned Co-axial escapement. Collectors will recognize its elegant form, simplicity and legibility as hallmarks of the Daniels oeuvre. The Anniversary piece slated to reach the auction block is estimated to sell for between CHF 300,000 and CHF 600,000.

The unique Spring Case Tourbillion is the final, standout offering of the trio. The piece is one of just two wristwatches Daniels painstakingly handcrafted for his own personal use. Completed in 1992, the watch is equipped with a double-dialed spring case with a one-minute tourbillion. It features guilloche silver dials with gold chapters on its front-facing dial next to a subsidiary for power reserve indication. Meanwhile, the reverse dial shows the calendar indication and tourbillion escapement.

Collectors will also notice that the two-part case has an inner section that holds the movement. Its hinged to the outer bezel, so that when released by a pusher in the band it will spring open to reveal the reverse dial. For this to happen, its winding crown is cleverly positioned between the lugs for a seamless look. Daniels sported the piece daily until parting ways with it in 2005 after a friend convinced him to sell it. Its arrival at Phillips will mark the first time the timepiece has ever appeared on auction.

Experts estimate the Spring Case Tourbillion will sell for more than CHF 1 million. If you’d like to make the piece your own, start stacking your chips now.