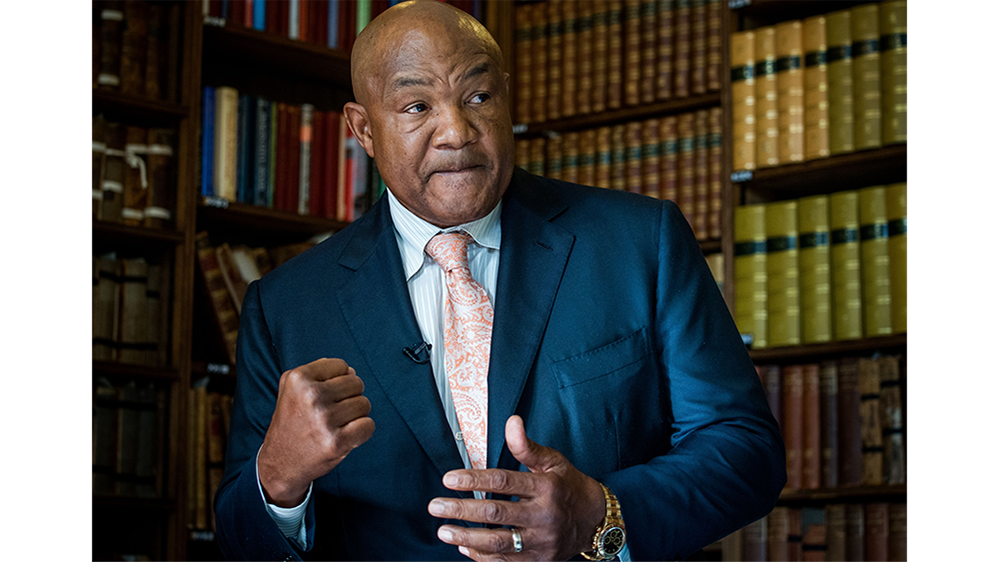 Whether you know George Foreman for his boxing career or as the entrepreneur behind the eponymous countertop grill, you know who he is because he’s a legend in both arenas. The two-time world heavyweight champion didn’t experience a professional loss until he went head to head with Mohammed Ali at 1974’s famous “Rumble in the Jungle.” He retired from boxing three years later at 28 years old, only to resurface at age 45 to regain a portion of the heavyweight championship when he knocked out 27-year-old Michael Moorer.

Today, Foreman remains one of the oldest and most decorated heavyweight champions in history—and he’s also one of the richest, with an estimated net worth of $300 million. Much of that wealth is thanks to his George Foreman Grill—a product that netted him $139 million when he ultimately sold the company in 1999. Since then, he’s lived the good life.

We spoke with Foreman ahead of Hublot and the World Boxing Council’s “Night of Champions” gala at the Encore in Las Vegas—an event which raises money to help retired boxers with financial and medical hardships—grilling him on his passion for watches, cars and what he bought when his mini-sized portable grill made him a fortune.

What has Hublot and the WBC’s “Night of Champions” gala meant for boxing?
It takes boxing to another level. The Greeks did boxing fist to fist. Romans rocked the hands a little bit. Great Britain gave it class but no hitting below [the belt] and America brought boxing paychecks. Now these events give boxing something it’s always needed—a class of, “I care about my fellow man.”

Was there ever a moment in your busy career when time seemed to stand still?
In Africa. I’m fighting Muhammad Ali. I follow him off the rope. I’m going to get him. When I turned and faced him, he hit me with a straight right hand. Boom! Didn’t really hurt, but there I was on the canvas. I looked up in my corner because that’s what you’re supposed to do. And they told me, “Stay down, stay down.” They’re supposed to count to three. And so I said, “Okay,” and I heard “One…thousand one…thousand two.” Then just jumped up and when I jumped up, it was over with. I’d lost the title. That seemed like it lasted two hours.

In your second act you became an instant entrepreneur with the George Foreman Grill. Were you surprised by the success?
At first most people were like, “I don’t want that thing. Get that away from me!” It became a reality because I was eating hamburgers all the time. When I did that deal I thought I’d only get maybe 16 of them—maybe give one to my aunt or my cousin. I was going to put them around my training camps. I never thought we’d sell over 120 million grills. Do you think I saw that coming? No way.

What was the first thing you bought when you sold the company in 1999?
By that time I had too much junk. You know when they start calling you a hoarder? I tell people now, “Don’t give me anything I can’t eat,” because I don’t have any place to put it. But I still love watches.

What was the first watch you ever bought?
It was a tourbillon. You could see through it. I think it was a Bulova Accutron. I thought I was a playboy. No one had one like it.

You’re wearing a gold Rolex Daytona ref. 16528. How did you get your hands on it?
I traveled around until I finally found one, but it’s not my favorite watch. When you walk into a room with a Rolex, everyone says, “Oh a Rolex!” But when I go into a room with a really nice watch no one pays attention, and I love that.

What is your favorite watch?
The one I lost—I bid on a Hublot watch at the last WBC gala benefit that had my signature in it. After the bid got to $100,000, some guy bid $110,000 and it was embarrassing because, what could I say? “I’m George Foreman?” I couldn’t let him think he got me. So not only did I lose the watch, I lost face.

What other watches do you own?
I have a whole collection of Franck Muller watches. He did one with the maps of Africa and South America and I love these and a few others. Most of the ones I have, I can’t even pronounce the name. If you buy watches and you can pronounce the name, then it’s not a good watch.

There’s some truth to that! Can you describe some of the others that you own?
I have the one with the triple bridge.

That’s from Girard-Perregaux.
Yes, that’s right. I also have a very good one from the International Watch Company (IWC). They make a good watch because you get to stop the watch and break down the seconds. I even have one that chimes. That watch is so nice. I also have one from Ulysse Nardin that has a little guy that hammers the chime. Franck Muller has the Vegas watch too. My grandkids love it. They say, “Ooooh, can I play with it?” I say, “No, you can’t play with it but I’ll show it to you.” I’m always doing something to the band—I’m a boxer, I’m always destroying them so I have to get another one. I’m a watch nut.

How many watches do you own?
Don’t know—I have that many.

Where do you keep all of them?
Some of them I keep in a safety deposit box and some of them I bring home just to look at them. I give my kids watches when they go to college but I say, “You can’t take that with you.” They leave them with me [until they finish college].

You collect cars too. How many do you own?
I really don’t know. I keep them in a garage. I had a fire there recently and I started counting them and I said, “Oh, I didn’t know I had that one!” The Robb Report started my obsession with cars. You guys had me finding a lot of cars. I had to hunt for this or for that. That was my thrill—it was more important than any boxing magazine.

What car in the Robb Report was your first purchase?
A red Lamborghini. That must have been in ’94 or maybe ’95 or ’96. The Lamborghini itself didn’t mean that much to me but it just became more and more alive in the magazine’s photographs.

What is your most prized possession?
My 1977 Volkswagen Beetle. It’s a black convertible. I love that car. It’s the only car I truly wanted. Those others, I just bought to show off. You know how guys are, “I got a Lamborghini. I got a Ferrari. I got this. I got a Cadillac.” But the Volkswagen Beetle…it was the car.

What do you love about it?
I remember the day I saw it when I was working in California. A guy had one parked out front of where I worked and I said, “That’s a car!” I’d get a ride sometimes from Pleasanton, California all the way to San Francisco and there would be seven of us in that car. That car could drive. That’s the only car I’ll never get rid of.