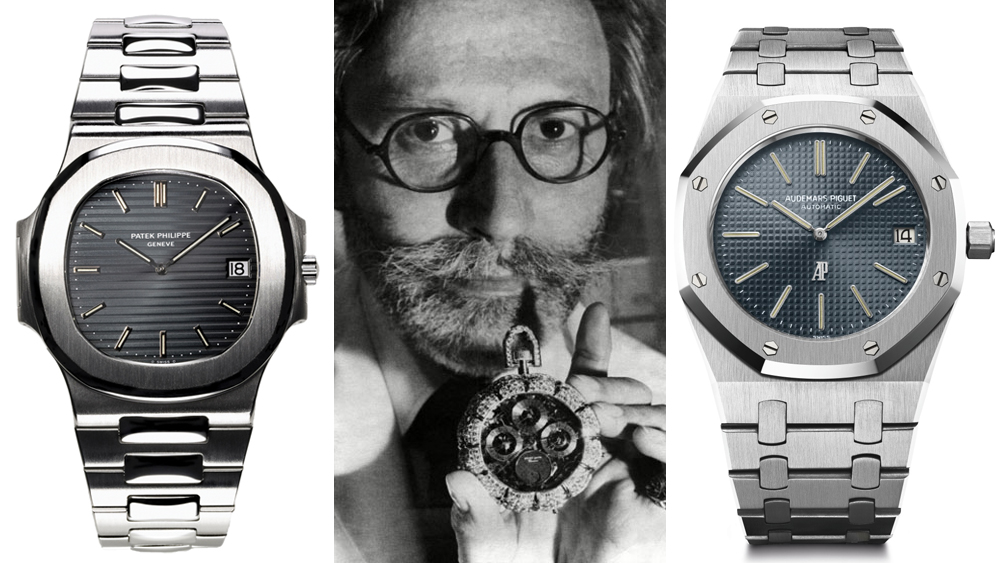 Like Ernest Hemingway, Frank Lloyd-Wright and Andy Warhol, the product designer Gérald Genta emerges from the 20th Century as a towering figure in his field. But unlike his fellow artists, few, outside of watchmaking circles, know his name. We may never see such dominance again from a designer, especially because in-house teams have largely ousted the freelance ringer. However, during the post-WWII decades when he was active, Europeans and Americans still championed the lone genius above all else, and Genta became a brand in his own right: a man sought out by the thriving luxury industry to titillate the jet-set with elite, forward-thinking products ranging from eyeglasses for Cartier to a long list of paradigm-shifting watches, most of which are thriving as current offerings today.

Born in Geneva in 1931, Genta earned his Swiss Federal Diploma as a jeweler and goldsmith in 1951 at age 20. By 23, Genta was designing watches for the storied watch house Universal Genève. Today, collectors herald his Universal Genève Polerouter of the 1950s and the Golden and White Shadows of the 1960s as classics of the early Mid-Century style, itself a revival of the Bauhaus School’s high-minimalism that the Nazis so bitterly interrupted. Genta’s designs from this time resonate with the refreshed aesthetics and abundant optimism of the post-War era.

The Polerouter used an innovative micro-rotor to wind the watch, and despite a long-lasting patent dispute with Benrus, early models sported the clever device as part of the Caliber 215 movement, which could withstand the magnetic havoc of flying over the North Pole—a new challenge for pilots en route from Copenhagen to Los Angeles for SAS airlines. This unique movement started Genta’s love affair with designing thin watches around thin movements. Universal Genève would riff on Genta’s Polerouter for decades, making everything from dive watches to gold dress watches under the moniker.

The Polerouter’s dial was the template for 1959’s Genta-designed Omega Constellation, which would angle the steel outer dial to become the now famous “pie pan” that showed up on more than a few Seamasters, and which continues to adorn modern Constellations. Genta’s Constellation marks the end of distinct period for the designer, as he would soon turn to far more groundbreaking designs.

Genta came back to Universal Genève in the 1960s to design the Golden Shadow and White Shadow. The Shadows show Genta’s new found fascination with ultra-thin elliptical cases, which again relied on ultra-thin movements with micro-rotos, and later Bulova’s pre-quartz electronic Accutron movements. The Shadows were revolutionary in their technology and their design, and this caught the eye of Patek Philippe, who hired Genta to design 1968’s Golden Ellipse.

Many consider The Golden Ellipse a masterpiece of Mid-Century watchmaking, if also Patek’s first mimical design (there would be another in the Genta-designed Nautilus of 1976). The Golden Ellipse debuted in 1968 and has had a healthy run that peaked in the 1970s, tapered down to jewel-encrusted women’s models during the 1990s, and eventually came back to its roots in recent decades. In 2008, Patek Philippe celebrated the 40th anniversary of the Golden Ellipse with a platinum reissue, and for the watch’s 50th Anniversary in 2018 Patek released a modern sized gold version. True to the original, the 2018 Golden Ellipse runs on Patek’s Caliber 240 with a micro-rotor that brings the watch’s thickness below 6 mm.

The 1970s turned out to be Genta’s decade of hits. He delivered classics for Bulgari, Audemars Piguet, Patek Philippe, and IWC. In 1975, Bulgari released the oddly named Bulgari Bulgari, a watch that defied all expectations one might have had for Genta’s work. Genta used an ancient Roman coin as the inspiration for the Bulgari Bulgari’s bezel, engraving it deeply with the brand name twice (thus the odd name), and he drew upon the columns of ancient Roman architecture as inspiration for the cylindrical case. The Bulgari Bulgari has been a running hit for the Italian brand for decades. They’ve since acquired Gerald Genta’s own eponymous watch brand and have captured the imagination of watch fans with Genta’s Octo Finisimo, which, in true Genta style, continually breaks thinness records.

In terms of overall impact within the watch industry, Genta’s Royal Oak for Audemars Piguet is arguably his greatest achievement. This nautically inspired watch–which Genta claims to have designed in one evening—certainly transformed Audemars Piguet from a respected brand into an industry powerhouse, but the Royal Oak also created the entire luxury sports watch category. The Royal Oak came out in 1970, and it captured the emerging fashion zeitgeist, which breezily combined casual attire and high fashion; think designer jeans and leisure suits, and you get the gist. Few watches are as instantly recognizable, broadly loved, and shamelessly imitated.

The Original Royal Oak from 1972; The 2019 Royal Oak  Courtesy of Audemars Piguet

It was Patek Philippe who imitated Audemars Piguet most blatantly by hiring Genta to design the now-classic Nautilus. Released in 1976, the Nautilus was Patek’s first sports watch, and because of its similarity to the Royal Oak, it garnered mixed reviews from hardcore Patek fans. But the Nautilus had the desired effect of attracting the growing consumer base for elegant sports watches to Patek Philippe, a traditional brand that feared going out of vogue as the world rushed along at supersonic speeds. Today the Nautilus is perhaps more of a hit than it ever was, with waiting lists for steel models going on for years. Any misgivings over its imitative nature have been long forgiven and/or forgotten, and the Nautilus looks as hip today as it did in the 1970s.

IWC was another brand that needed a new look to keep pace with the fast-changing fashions of the 1970s, and in 1976 they introduced the Genta-designed Ingenieur as their entry into the luxury sports watch category. Though less celebrated than the Royal Oak or the Nautilus, the Ingenieur rounds out a trio of 70s hits from Genta. All three of these watches have been in continuous production since they first arrived on the scene.

In the 1980s, Genta went on to create his own eponymous brand (eventually acquired by Bulgari). Genta’s company produced watches that get the chairs creaking in the auction houses as people crane their necks to witness the bids soar. And while Genta’s own brand was filled with masterpieces, they were mostly made in small numbers for elite watch aficionados, and thus never gained the popularity a watch can achieve via big brand marketing.

But there was one more dressy sports watch for Genta to design for a famous brand, this time Cartier. The Pasha de Cartier had been around since the 1930s when Mr. Cartier designed an elegant yet waterproof watch specifically for the Pasha of Marrakech, who swam daily. In 1985, Cartier–always charmingly late to the game–updated the Pasha as a luxury sports offering. With 100m of water resistance, Arabic numerals, and a round case, Genta’s Pasha was pushing the boundaries of what a Cartier could be, but he counterbalanced these innovations by including Louis Cartier’s own Vendome lugs and signature nipple crown topped with a blue sapphire.

The Pasha is not currently on offer from Cartier, but it opened the floodgates for Cartier to indulge in round watches. Today there are numerous round models within the Cartier catalog, and each of them carries Genta’s touch.

Genta created all kinds of watches for brands like Timex, Benrus, Seiko, and Rolex (check out the Rolex King Midas for a truly unique piece). These watches were less celebrated than the icons above, yet they demonstrate, if only in sheer numbers, how broad-reaching Genta’s influence was on watch design. Though we can account for the disappearance of the lone genius designer to various cultural, technological, and economic factors, perhaps we are closer to the truth in saying that Gerald Genta was one-in-a-million, and that the stars aligned to raise this ambitious young Swiss kid to his now legendary status among the great artists of the 20th Century.