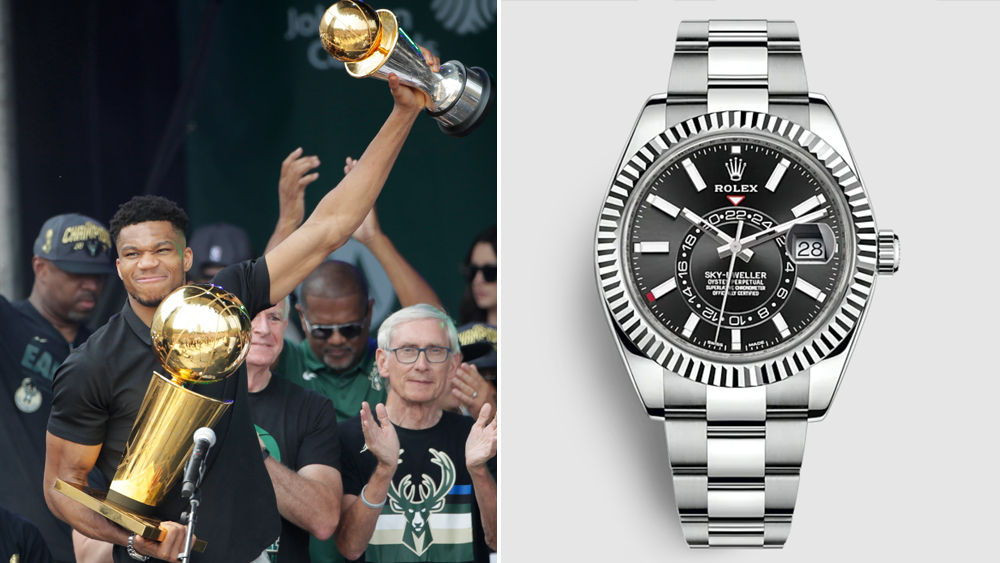 How do you celebrate a first NBA championship? If you’re Giannis Antetokounmpo, you buy yourself a new watch.

The Milwaukee Bucks superstar showed up to the team’s celebratory parade on Thursday morning with a brand-new piece of wristwear—a Rolex Sky-Dweller. The Finals MVP has shown himself to be something of a watch enthusiast over the past year, and this latest timepiece only adds to that reputation.

Prior to the start of last season, if you saw Giannis wearing a watch, it was most likely be his trusty Oyster Perpetual.  Since this past season tipped off, though, the Greek Freak started to branch out a little, with a couple head-turning Rollies—a “Panda”-dial Daytona and a Rainbow Rolex Cosmograph Daytona—and an Audemars Piguet Offshore, just to name a few (h/t GQ). He may only be 26, but he clearly knows what he likes in a timepiece.

For more proof of this, just look at his latest wrist candy. First released in 2012, the Sky Dweller is one of the watchmaker’s most complicated offerings. It has a 9001 caliber movement that features two time zones, a date display, a month indicator and an annual calendar. Giannis’s example, Ref. 326934, comes in white Rolesor, has a black dial and a 42mm case topped with one of the brand’s trademark fluted bezels. With a price tag of $14,800, it’s an elegant timepiece. It also just so happens to be the watch favored by the greatest NBA player of all time, Michael Jordan.

If you’re wondering why Giannis was able to elevate his watch game so dramatically this year, the answer is likely pretty simple: The star forward signed a five-year, $228 million contract extension with Milwaukee last December, days before the season started, a decision that’s paid off nicely for both sides so far. Considering that his newest Rolex costs just one 1,860th of his yearly salary, we wouldn’t be surprised to see Giannis’s collection grow exponentially by the time the Bucks start defending their title this fall.