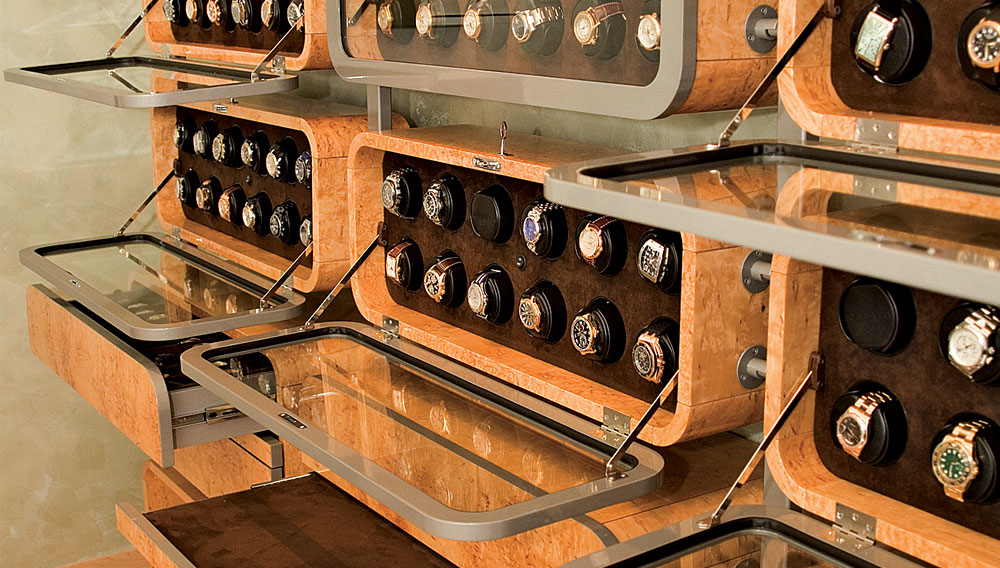 Chuck Agnoff’s retirement was short-lived. To celebrate both his 60th birthday and his retirement, Agnoff’s wife gave him a gold Rolex, which Agnoff loved for its aesthetics and craftsmanship but grew to despise for its fickleness. If he left it unworn for more than a day or two at a time, the watch would stop running, which required him to reset the time, day, and date. Being mechanically inclined, Agnoff decided to build a winder that could keep his Rolex current on the days when he wasn’t wearing it. Once he realized how well that winder worked, Agnoff was back in business, this time dedicating himself to building the best watch winders. He launched his company, Orbita, in 1996.

Since then, Agnoff has sold a variety of watch winders and watch-winder cabinets to a slew of passionate watch collectors, but it was about six years ago that he met a collector who truly challenged his abilities. That particular collector was building a new home and wanted an entire room devoted to his timepieces. It was a unique request and a sizable challenge, but Agnoff understood how a serious collector’s mind worked. “There’s a fixation with having a collection,” he says. And if you can’t show it properly, what’s the point?”

The solution involved a series of custom-made cabinets that could house enough watch-winder modules to power the collector’s more than 100 watches that required constant winding. Working with DeArt, an Italian furniture maker, and Milan-based architect Gabriella Rossi, Agnoff created a new system of lockable, glass-encased horizontal cabinets that each could hold winders for a dozen wristwatches. Each winder was equipped with its own power switch, and each cabinet of 12 winders was equipped with a master power switch. From there, additional cabinets were designed with suede-lined drawers that could hold more than 200 wristwatches, all wrapped around display cushions. Additional drawers were installed to store more timepieces, as well as pens, cuff links, and other pieces of jewelry. When they were done, Agnoff and Rossi had created a watch room that could safely display and maintain more than 300 watches. It cost $155,000.

For watch collectors who desire something similar, Agnoff insists that the plans take shape well before undertaking construction of a new home or room. “It’s not a jewelry box; it’s much more,” he says of this type of watch display. “It has to be done during the architectural stage if you’re planning to do something grand.”

Agnoff says that such a bespoke watch room is always a possibility, though the price would vary based on the complexity of the design and the magnitude of the request. The company also sells its watch-winder modules individually, should a customer want to incorporate them into an existing piece of furniture or have a specific piece of furniture made to house them. “There’s no limit to what you can do,” says Kevin Williams, Orbita’s marketing director. “If you can think of it, we can help you with it.”