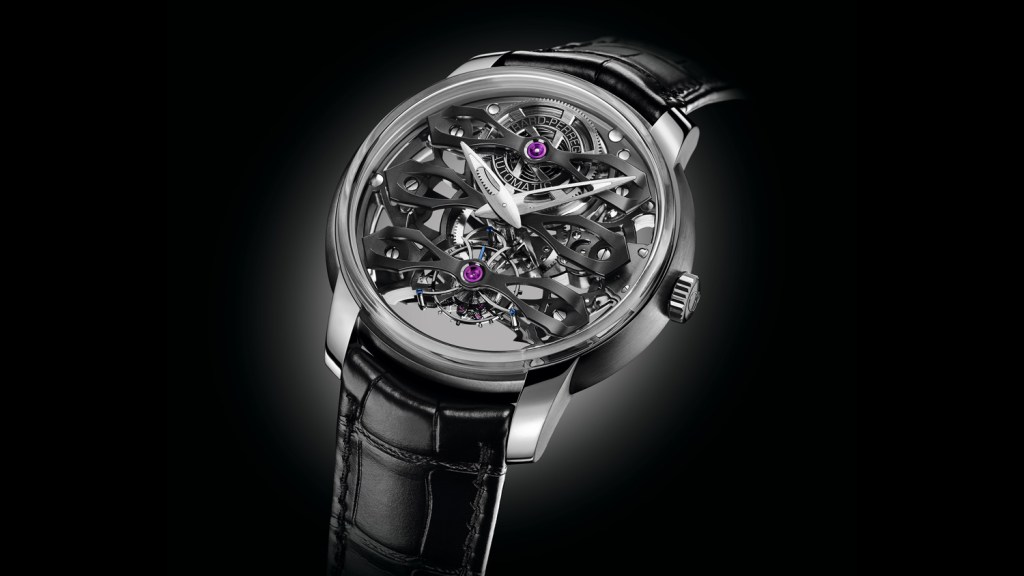 When it was first introduced in 1884, Girard-Perregaux’s tourbillon Three Gold Bridges Esmerelda pocket watch was a horological masterpiece and triumph. That’s why the prestigious Swiss watchmaker continues to explore new ways to express this invention, and its latest is a skeleton watch in the new Neo-Tourbillon with Three Bridges Skeleton.

The model was first revised in 2014, taking the classic three flat gold bridges and remaking them in larger, arched titanium versions. They’re said to be inspired by three great modern cable-stayed bridges, including Southern France’s Millau Viaduct (the tallest in the world), Morocco’s Mohammed VI bridge that spans the valley of the Bouregreg River near Rabat, and the Netherlands’ Oversteek Brug in Nijmegen.

Much like these giant structures that serve as inspiration, the titanium bridges in the watch seem to suspend themselves in the air, while the screws that hold the bridges together drive deep into the caliber—like abutments on a suspension bridge. The caseback and the dial side of the new Neo-Tourbillon are convex to show off the architecture and maximize the view of the movement. The GP 9400-0011 caliber is the same movement used in the 2014 Neo-Tourbillon, but here, the restructuring entailed removing the baseplate to create the skeleton.

The Three Bridges invention is essential to Girard-Perregaux’s DNA and brand recognition, so it makes sense to continue capitalizing on its crown jewel. The Neo-Tourbillon with Three Bridges Skeleton is a crystal-clear solution for showcasing this modern update to the 134-year-old classic.

The 45-mm-diameter titanium case is the same size as the Neo-Tourbillon from 2014, but the Neo-Tourbillon Three Bridges Skeleton is slightly thicker at 15.85 mm due to the volume needed for the transparency. The watch features 60 hours of power reserve and is water-resistant up to 30 meters (approximately 98 feet). It retails for $138,000.