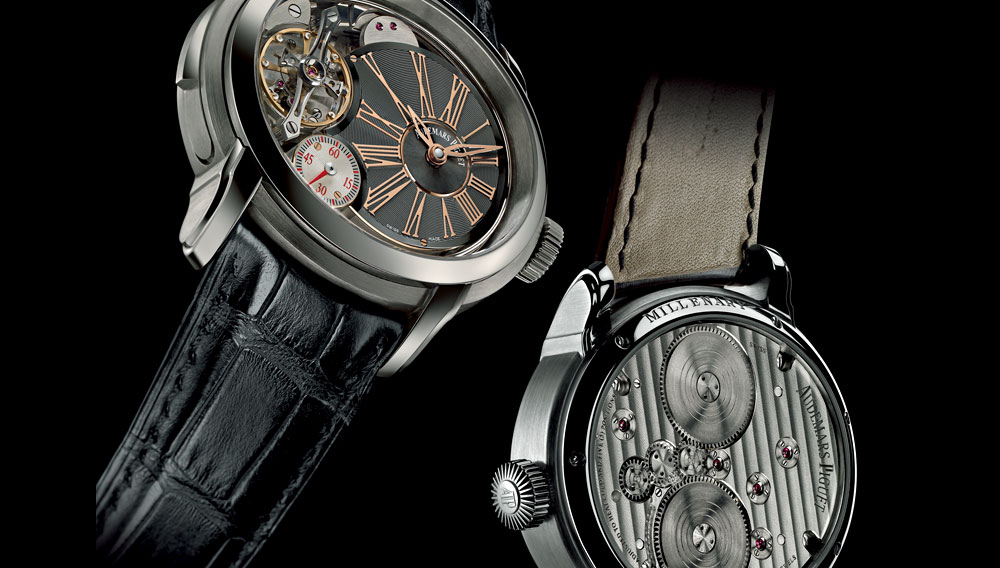 Over the past quarter century, some of the greatest careers in watchmaking have been launched at Renaud & Papi. Emerging talents from Robert Greubel to Stephen Forsey to Peter Speake-Marin have refined their technique at the small Le Locle manufacture, only to pack up their tools and start their own companies. Though sad to see them leave, Giulio Papi is sympathetic to their ambitions. “They are young and have dreams as I once dreamt,” he says. In a sense, they are recapitulating his own remarkable success.

Papi chose his career in 1980, at the age of 15, following the advice of his father, who had observed his passion for mechanics and his knack for repairing motorbikes. “I grew up in La Chaux-de-Fonds during the big quartz crisis,” he recalls. “Nobody wanted to learn watchmaking.” His father suggested that he attend the local watch school because he could anticipate plenty of work repairing mechanical watches manufactured before the advent of quartz. “I thought, why not?”

He was the only student. “I had four or five teachers just for me,” he says. One was Jean-Claude Nicolet, whom Papi compares to George Daniels: a master who could teach him how to make all complications by hand, which he did meticulously over the four years of his apprenticeship. With those skills, Papi found work at Audemars Piguet in Le Brassus.

It was not what his schooling had led him to expect. “For 18 months, I made only skeleton watches,” he says. “And when you’re young, that’s a long, long time.” He asked when he’d get to work on repeaters or perhaps a grande sonnerie. “They said it would be possible after 20 years . . . maybe.” So together with another member of the skeleton watch crew, Dominique Renaud, he did what Greubel, Speake-Marin, and so many others would one day do. He went independent.

“Of course, Audemars Piguet thought we were crazy,” Papi remembers. In fact, the two men were spectacularly lucky. In 1986, the quartz crisis was ending, and classic brands were eager for new complications. Seeking to revitalize IWC, Günter Blümlein bought a repeater module developed by Renaud & Papi, and then he commissioned a different minute repeater from the duo for another of his brands, Jaeger-LeCoultre. By the early ’90s, they had been instrumental to the development of complicated watches by companies ranging from Breitling to Harry Winston, and had been engaged by Blümlein for the relaunch of A. Lange & Söhne, which had languished for 40 years mass-producing watches for the East German proletariat.

But the work took its toll. The need for sizable new facilities cost money, and finance proved more complex than the most complicated watch. “We made a lot of mistakes,” Papi admits. Unable to secure a bank loan, they circled back to Le Brassus, where Georges-Henri Meylan bailed them out by acquiring 52 percent of the company for Audemars Piguet in 1992.

Ever since, the manufacture has been called Audemars Piguet (Renaud & Papi) SA, and approximately half of the work has been for the parent company, which increased its ownership share to 80 percent in 1999 when Renaud cashed out to open a luxe bed-and-breakfast. Meylan’s investment has paid impressive dividends. Papi developed the brand’s exclusive Robin escapement, which runs without lubrication, as well as innovations such as a double hairspring to compensate for changes in a balance’s center of gravity without a tourbillon. According to AP design director Octavio Garcia, “Giulio is exposed to different points of reference than we have in Le Brassus. He’s very open-minded, and he also has a very strong faculty for listening.” As a result, he is able to bring fresh ideas to AP, tailoring them to the company’s needs. One of the most fruitful collaborations has been on the Cabinet No. 5 and the subsequent Millenary series, which feature a visceral three-dimensionality that Garcia describes as “a new sort of formal language where design meets engineering.”

The open-minded Papi is equally at ease with other vernaculars. He has been intimately involved in the development of the Richard Mille brand and speaks with particular pride about the breakthrough RM 002, for which he developed a carbon mainplate. “It was the first high-end watch without the code of the classical watch,” he says. He also has recently developed the J12 Rétrograde Mystérieuse for Chanel, showcasing a unique vertical crown that met the fashion house’s request that the watch be perfectly round on the wrist. And some of his former employees—such as Carole Forestier-Kasapi, now at Cartier—have even come back to Le Locle with new commissions for their old boss.

Papi still follows the success of independents like Greubel Forsey, and he confesses to wondering sometimes what life would have been like had he remained independent as well. “I personally have a lot of ideas,” he says, sounding like a dreamer once again.