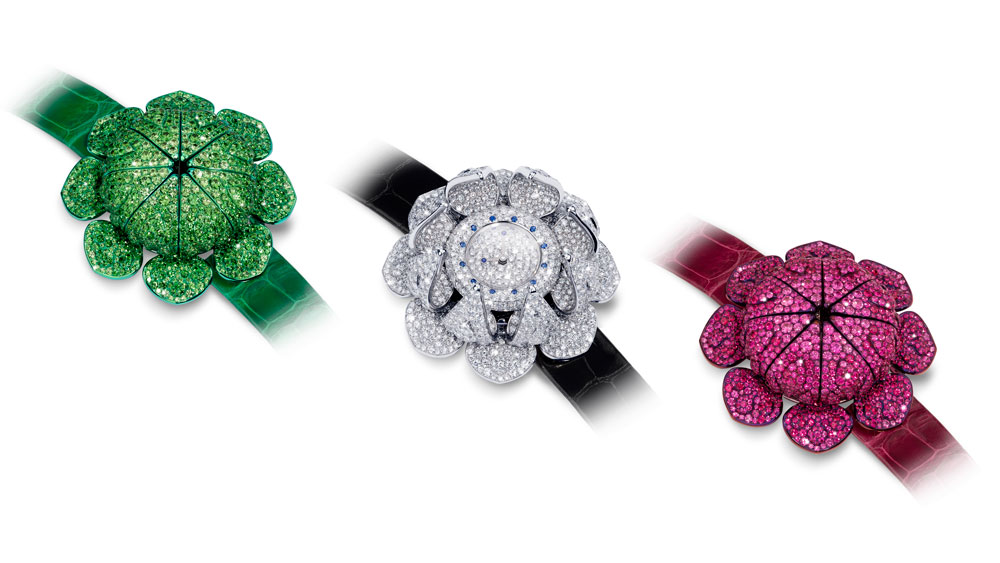 Master jeweler Glenn Spiro has an eye for exquisite jewels. With the Reveal by G, the London-based designer has applied his distinct inventiveness and craftsmanship to watches for the very first time.

Secret watches test a jeweler’s skill for marrying design creativity and technical complexity. Delicate and elegant enough to be worn on a woman’s wrist, they must double as jewel and timekeeper, the movement packed beneath a glittering, gem-studded case. For Spiro, who loves to experiment with new materials and techniques, the watch was a natural development.

“The creation of the Reveal watch was a pretty organic one,” he says. “Our Reveal rings, which we launched 4 years ago, fast became one of our signature pieces. And when we were playing around with a new design for one, we suddenly thought it would be an incredible mechanism and home for a watch.”

Based on the same lotus-flower design of the Reveal ring, a seamless turn of the petals ingeniously reveals the diamond pavé dial. The elegantly simple end result belies the fact that it took 2 years of research and development to complete a finished watch that Glenn was happy with.

“The real challenge with the process was that we decided to set stones on the inside and outside of the petal, using one piece of metal to mount them,” he explains. “This is already quite a complicated process in diamonds, not to mention in softer-colored stones, but we got there in the end and are extremely pleased with the result.”

Entirely gem-set both inside and out, the voluminous, softly curving petals of the flower contrast with the clean edges of the visible metal. With each watch taking three months to complete, the Reveal watch is available in a series of colorways—from the restrained elegance of diamonds on white gold to the exuberant color pop of rubies and pink sapphires to emeralds and tsavorites on matching shades of titanium. The watch will be available for purchase at Harrods starting in March.