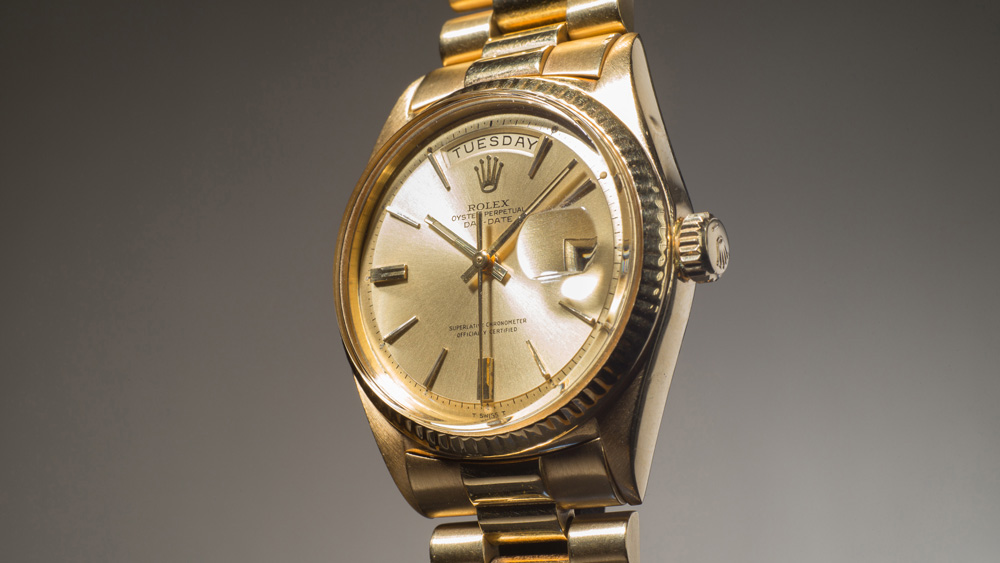 Provenance is king when it comes to watches, so even basic models can fetch top dollar if they come from a famous owner and boast a legendary backstory. Remember Elvis Presley’s $1.8 million two-hand Omega or Marlon Brando’s $49,240 Rolex DateJust?

Now one of golf’s most prolific players, Jack Nicklaus, is putting his yellow gold Rolex Day-Date ref. 1803 up for sale and Phillips auction house is getting an early start on the momentum. Even though the announcement was made on Tuesday, the watch won’t be at auction until December 10th.

Although the reference isn’t particularly rare, Nicklaus wore it daily for 50 years throughout his historic career. The same model from the early ’70s with the same champagne “Pie Pan” dial currently retails for around $9,995.

The timepiece, now nicknamed the “Golden Bear” (Nicklaus’ famous nickname), was a gift; Rolex gave Nicklaus the watch in 1967 when he won 12 of his record 18 professional championship titles. According to Phillips, the story goes that while Nicklaus was attending the Canada Cup in Tokyo in 1966, he was offered his choice of watch from Rolex. Fellow golf legend Gary Player was the one who advised Nicklaus to get the gold Day-Date. He received the watch a year later and wore it almost every day for the next five decades.

“This is the very first watch I ever owned, and the only watch I wore for every professional tournament I’ve won throughout my career,” said Nicklaus in a press statement. “It has accompanied me at U.S. Opens, Masters Tournaments, PGA Championships, Open Championships and countless other events for over five decades, and has served me well at every step along the way. Parting ways with this watch is certainly bittersweet.”

Ahead of the auction in December, the watch will be exhibited at the Jack Nicklaus Museum in Columbus, Ohio, on May 29th, followed by the Memorial Tournament Presented by Nationwide hosted by Jack Nicklaus in Dublin, Ohio from May 30th to June 2nd. Finally, it will be available for viewing at the US Open at Pebble Beach from June 13th to June 16th.