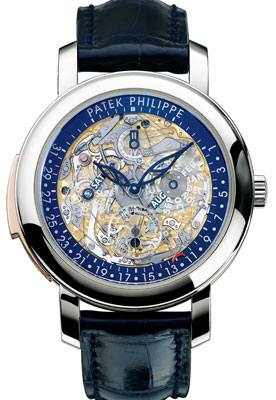 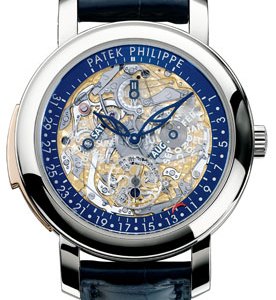 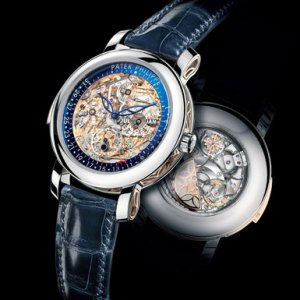 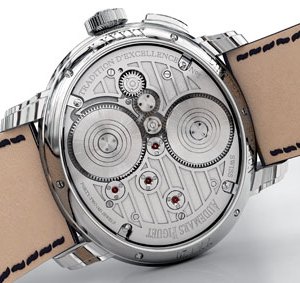 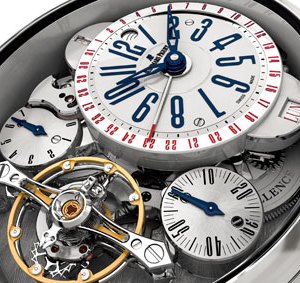 A watch manufacturer traditionally has demonstrated its mastery of the mechanical art by producing a grand complication, often a sober-looking piece that incorporates a chronograph, perpetual calendar, and minute repeater. However, as watchmakers continue to introduce futuristic designs and innovative mechanisms, they are changing the perception of what constitutes a noteworthy technical achievement. This year, three established Swiss manufactures debuted groundbreaking pieces—with complex case constructions and see-through dials—that may not qualify as grand complications but are nevertheless grand.

Patek Philippe has long defined the traditional form of highly complicated watches with its slim, simple cases and uncluttered dials that belie the complexity inside. Its new Ref. 5104 minute repeater/perpetual calendar, however, suggests that the Geneva house is adopting a new, less conservative aesthetic. “The idea,” says Thierry Stern, vice president of Patek Philippe’s Design and Creation Department, “is to create pieces our customers will recognize as exceptional.”

With the 5104, Stern and company have created a piece that is exceptional for Patek because of its modern design. It has rose gold, latticed insets on the case and rotor; an open-works dial; and transparent sapphire disks for the perpetual calendar display. Over the past few years, contemporary-looking models such as 2004’s Gondolo Calendario have trickled into the line, but the 5104 is the first significant complication, other than traditional skeletons, with a design that departs so dramatically from the house’s roots. The piece is available exclusively in the brand’s Geneva boutique at a price of nearly $468,000.

Although it has the same base caliber as the Ref. 5074 minute repeater/perpetual calendar, the 5104 still presented a formidable challenge for its creators. The company’s case makers originally balked at the intricate recessing dictated by the rose gold and platinum case construction. Furthermore, the delicate sapphire disks that display the day, week, and month are difficult to attach to their supporting pinions, and they often break during the final assembly process. Patek Philippe claims that these obstacles prevent it from making more than eight to 10 pieces per year, but it also realizes that limiting the watch’s production will only make the piece more irresistible to collectors. “Admittedly, it’s a little hard to read,” says Stern of the skeletonized dial. The line for those willing to squint is growing quickly.

The tradition of excellence Cabinet No. 5 is not an overtly complicated timepiece: Its only complication is a perpetual calendar. However, the watch marks the debut of Audemars Piguet’s new escapement design, which, because of the precision it delivers, represents a significant advancement in the state of the art. Audemars Piguet regulates this watch to a standard of –¼ seconds per day—three to four times more precise than watches bearing Switzerland’s official chronometer certificate. The watchmaker will produce only 20 examples of the $320,300 Cabinet No. 5, which Audemars Piguet and Renaud et Papi, the specialty wing that designs the company’s complications, worked on in secrecy for the last five years.

Most mechanical watches lose as much as 35 percent of the energy stored in the mainspring because of the inefficiencies of the conventional anchor escapement, which releases energy reliably but is hampered by high friction and the need for lubrication. Audemars Piguet addressed this problem by reviving the Robin escapement, a design that was used in 19th-century marine chronometers. Unlike the anchor design, the Robin escapement does not slide against the escape wheel, which makes it more efficient. However, the Robin configuration is easily affected by shocks, which rendered it unsuitable for wristwatches until Audemars Piguet developed a security system that prevents accidental movement of the pallet fork and reduces friction by as much as 40 percent. The additional energy drives a larger balance wheel (for greater precision) suspended on two hairsprings that govern its concentric motion, providing better balance and regulation. The movement’s twin barrels deliver seven days of power reserve.

You can admire the Cabinet No. 5’s performance by following the watch’s ultraprecise independent second hand, also known as a “dead second,” which advances from one second to the next without a quiver. Or you can view the beating movement, with its stark, modern finish, through the open-works dial that showcases the new escapement. Though the Cabinet No. 5 may not boast a long list of complications, it is a noteworthy achievement in accuracy.

When Jaeger-LeCoultre’s senior product managers sat down in a Vallée de Joux restaurant to brainstorm ideas for a new timepiece to mark the 75th anniversary of the Reverso model, they did not expect that their project eventually would vie for the title of the world’s most complicated wristwatch.

The massive Reverso Triptyque, which is priced at about $375,000, initially impresses with its audacious design comprising an unprecedented 18 complications. Most grand complications incorporate a remarkable number of parts within the case. However, much of the Triptyque’s mechanism remains outside the case.

Pursuant to its philosophy of engineering the movement and the case together, Jaeger utilized both sides of the Reverso’s rotating case, plus its cradle, to which the strap is attached, to house the movement mechanisms. Thus Triptyque is perhaps the first watch to display three distinct dials. The primary movement—including spring barrels, gear train, and tourbillon escapement—is positioned in the main case, as are the numerous celestial complications, including sidereal time (which tracks the stars’ course across the sky), zodiac calendar (which traces the sun’s path through the constellations), and sunrise/sunset times. All of these are displayed on the case back. The entire perpetual calendar module, however, resides in the cradle and is visible when the main case is rotated in the up position. Realizing that this module needs impulse from the main power source only once per day (when the date changes), Jaeger-LeCoultre’s engineers devised a small metal pin that extends from the main case to advance the perpetual calendar at midnight.

The Triptyque is the first timepiece to employ Jaeger’s new escapement design. It can be seen in the tourbillon cage, which is visible through an aperture in the top dial. The so-called ellipse isometer design is a variation on the détente escapement. Presumably, Jaeger’s interpretation of the design more efficiently uses the movement’s power to drive the timepiece’s vast number of nearly incomprehensible complications. The complications prompted one retailer to remark: “I wasn’t aware Swiss watchmakers took LSD.”