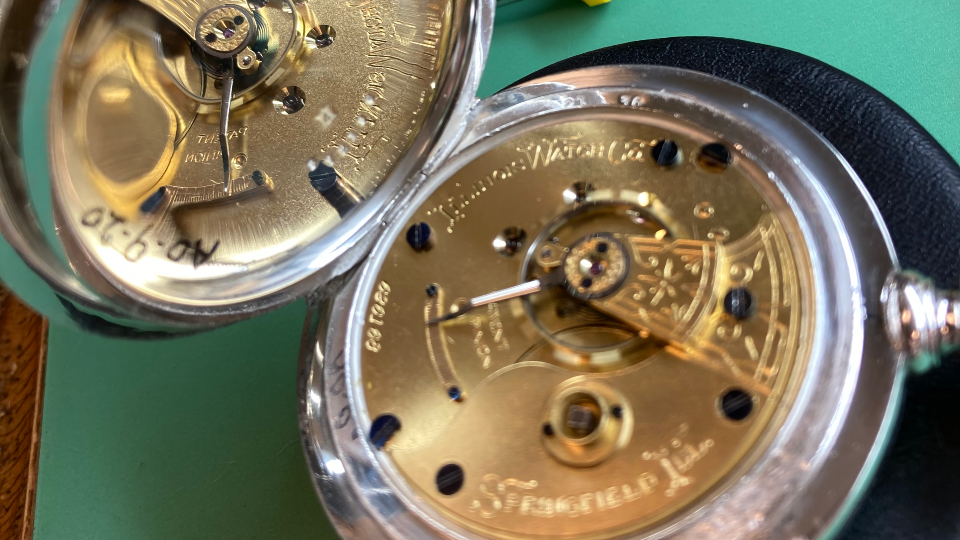 I never knew my great grandfather, Robert Henry Sturgess—or “Harry,” as he was called by family and friends. He died 20 years before I was born. But I inherited his 19th-century silver pocket watch, made not that long after the Civil War.

By the time it reached me five years ago, it had passed through four generations, stuck for a half-century in a 1950s Hamilton watch box—tarnished, scratched, with the movement long dormant. I saw a relic that had outlived its use, with little sentimental value—and lacking a name like Rolex or Patek Phillippe, I knew it wouldn’t be that million-dollar surprise on “Antiques Roadshow.” I put it back in my drawer.

In the last week however, after rethinking and having it professionally restored, the relic has become a beautiful, shiny, ticking timepiece sitting under a glass dome on my desk. It turns out Harry’s watch was a piece of family history that I didn’t understand or appreciate until its recent rebirth. 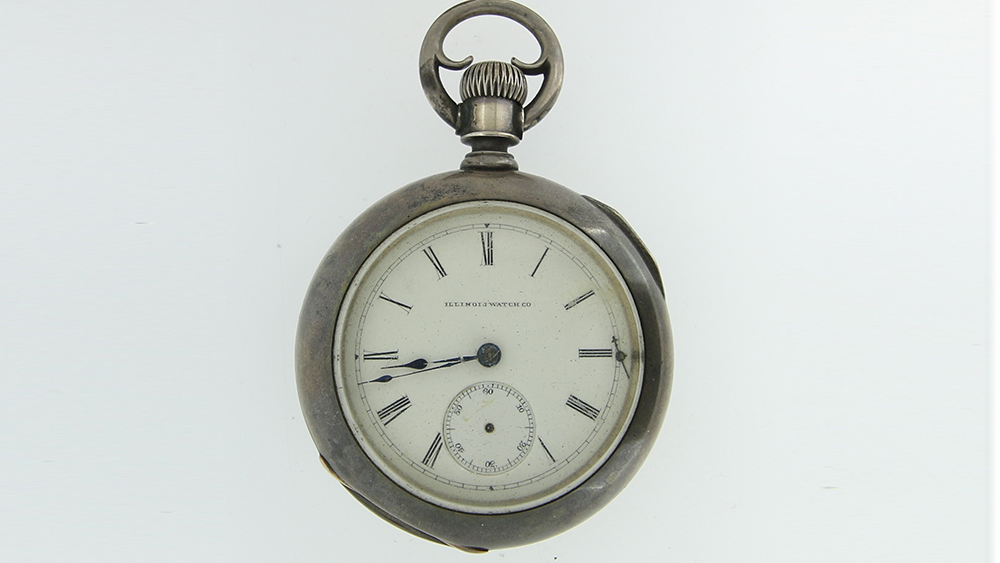 “Everyone had a pocket watch in those days,” says Steve Kivel, the third-generation owner of Grand Central Watch, the firm I entrusted my heirloom to, which is also the second-oldest business behind the Oyster Bar in New York’s Grand Central Station. “They were the timepiece of choice for hundreds of years, really up until the 1930s. People scheduled their lives around their pocket watches. It was a critical tool.”

Turns out Harry’s watch was much older than I thought—fabricated by the Illinois Watch Company in 1886. I’d assumed he’d gotten it for retirement from the First National Bank in Vandalia, Illinois, where he’d started out as a teller in 1895, eventually graduating to “Vice President/Head Teller” before his death at 71 in 1939. But the age of the watch and the fact that Harry worked full-time until six months before his death didn’t match. I wondered if it had been his father’s pocket watch.

“It’s most likely a family heirloom,” Kivel says. He described it as “a beautiful watch, but more dead than alive.” I’d assumed the watchmaker, Illinois Watch Company, was a small local Midwestern firm, but again I was wrong. “They were one of the coolest watch companies—a real monster in size,” says Kivel. The Springfield-based company started in 1872, and was acquired 60 years later by Hamilton (which perhaps explains the box). By the time the Illinois Watch Company died, it had produced 5.5 million timepieces, many of them private-label editions. 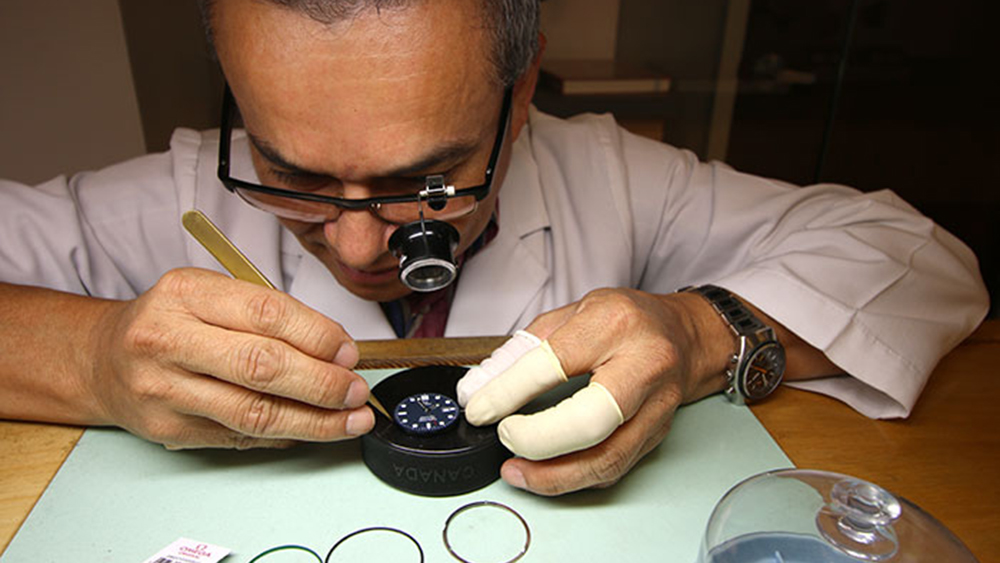 The restoration involved an intricate overhaul, a five-day process that included disassembling all components, inspecting each wheel, polishing the pivots, wiping its 11 jewels with soft wood to remove the original oil—which as it’s made from animal fat, hardens solid over time—adding fresh synthetic oil, and polishing the case with the same automatic ultrasonic cleaner used by some of the biggest names in horology. “We have over a million parts in stock and if we can’t find one, we fabricate it,” says Kivel.

Grand Central Watch is one of the most respected names in watch repair and restoration in the US. Its clients include former New York governors, commissioners for the NFL, NBA and MLB, as well as Hollywood directors and prominent New York families like the Roosevelts, Vanderbilts and Guggenheims.

Eileen Guggenheim recently had her father’s Hamilton wristwatch restored to its former glory. When Grand Central was repairing Harry’s watch, they were also readying a timepiece owned by Edgar Allan Poe—rather more ornate, and considerably more valuable at $120,000, than Harry’s—for auction. 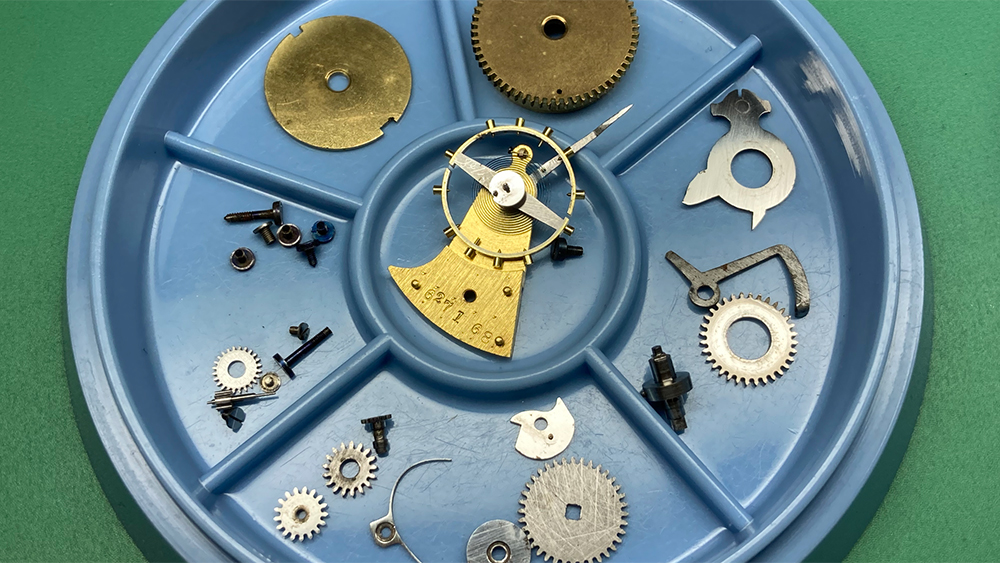 Some of the pieces of Harry’s watch after they were cleaned. They were then lubricated and reassembled.  Courtesy Grand Central Watch

Steve Kivel built up this old-world-style, ultra-exclusive repair shop after he took over the business from his father, Larry, in 2008. His grandfather, Max, originally established the business as a watch-repair booth in Grand Central in 1952, which then expanded inside the terminal in the 1960s.

Kivel, who began taking apart watches when he was seven, added the repair business about a decade ago by becoming a certified service facility for many of the world’s leading brands. “Just getting a parts account can take years,” he says. “We send two of our people for six-week training with one watchmaker every year. These Swiss companies do things strictly by the book. They won’t work with companies that don’t.”

Along with the restoration of Harry’s watch was a book prepared by Steve’s wife, Laura, which documented the process with images—its original tarnished look, the dozens of small, intricate pieces when it was taken apart, how they looked after being cleaned and polished, and the final timepiece, looking just like it did when it left the factory 134 years ago. 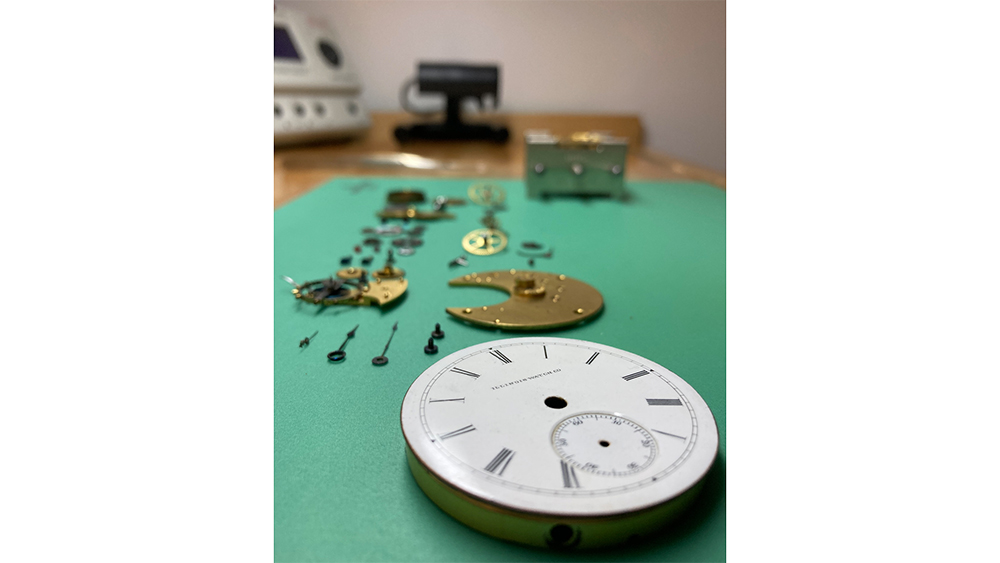 “We clean each individual wheel,” says Kivel. “The entire movement is cleaned and polished by hand.” The watchmaker replaced the mainspring of Harry’s watch and Kivel found a “new” 100-year-old crystal in his parts library to replace the original scratched glass.

Besides chronicling the repairs, our book also gives the history of the watch and the folks who owned it. I learned much about Harry—a side of our family I knew nothing about—thanks to information shared from the FNB Community Bank in Vandalia, Ill. The watch, in turned out, held family secrets.

Harry, it seemed, was not only a pivotal figure in the bank, but the bank was the main financial institution in a rural Midwestern town that helped its farmers through tough times like the Great Depression and World War II. Like many small-town banks, it was one of those unsung institutions that was essential to the life of the community. 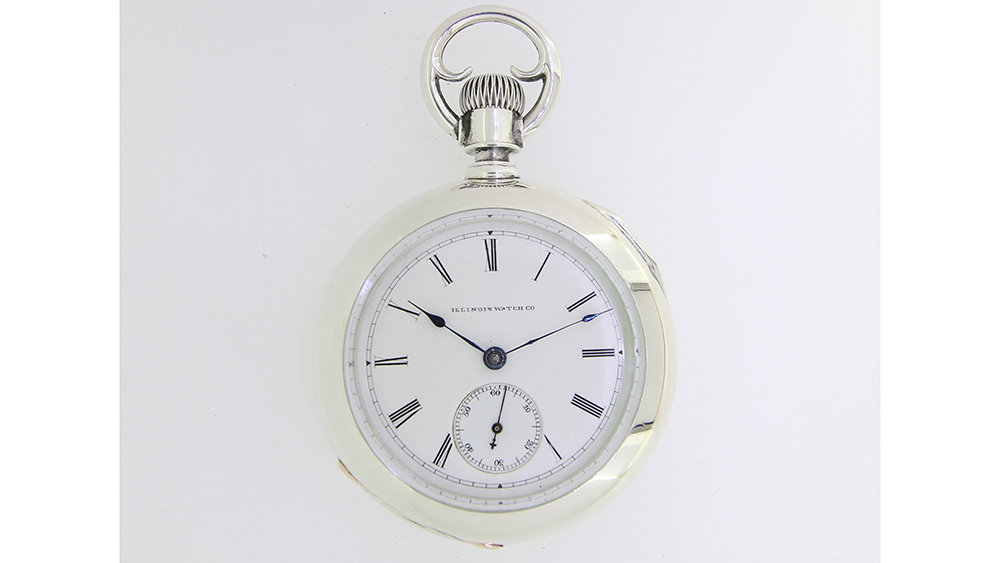 The “after” shot of the watch following its restoration, including a “new” 100-year-old crystal and ultrasonic cleaning to restore the silver housing’s luster.  Courtesy of Grand Central Watch

Harry was also ahead of his time by sending his three daughters to college in the 1920s, at a time when women, especially in small towns, typically stayed on a farm. He wanted them to have choices in life. And they did. My grandmother became an English teacher and her sister married and provided inspiration for a famous cartoonist. The third sister moved to New York and had a career at Carnegie Hall. If Harry’s watch had never been restored, I wouldn’t have learned much about this quiet, hard-working side of the family, instead of the rapscallions on my father’s side that got the lion’s share of family stories.

The restoration cost about $2,000 for the five-day process, including the book. Grand Central also returns the watch in an heirloom-quality presentation case, so it can be handed down.  Harry’s watch came back gleaming, keeping perfect time, the white porcelain face set against the black enamel Roman numerals. It was a beautiful piece of craftsmanship that now has meaning.

What separates Grand Central—and why many of the auction houses in New York send their most valuable watches to Kivel—is the extreme attention to detail. It’s not uncommon for some watch cleaners to merely dip the old watch’s movements in degreaser solutions to break down the oils, letting them air-dry. The process does not clean individual pieces to get rid of sediment or add synthetic oils to prevent internal friction. 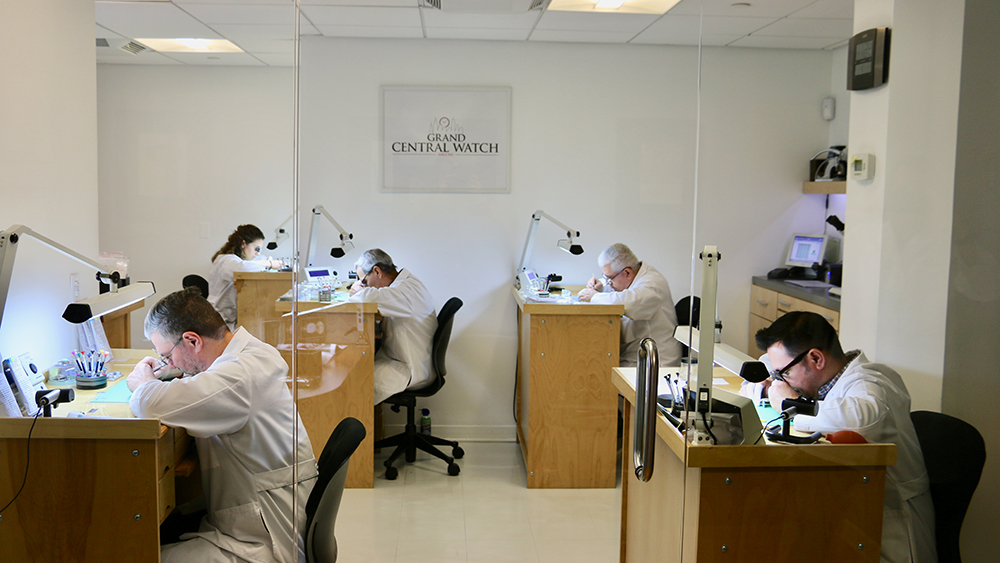 When he took over the family business, Steve Kivel had a vision to create a modern facility in Grand Central Station that was more like a lab for restoring watches than an old-fashioned repair shop.  Photo: Courtesy of Grand Central Watch

The watches run, but without the recalibration, do not always keep accurate time. They can also fail after a relatively short period.

“Their whole process takes just 45 minutes,” says Kivel. “There is absolutely no way they can clean and lubricate every piece. We find an ‘extreme’ pocket watch project takes three or four days. That’s what it takes to get it running as well as when it was built. It keeps perfect time.”

Grand Central still does a brisk trade in old pocket watches, taking in maybe 10 or 20 each week for repair, with a two-year warranty. “It can be hard to justify the cost,” says Kivel. “But we’re finding that people get very sentimental, even if it’s a Timex from the ‘70s. It might be the only way to remember someone who isn’t around anymore.” 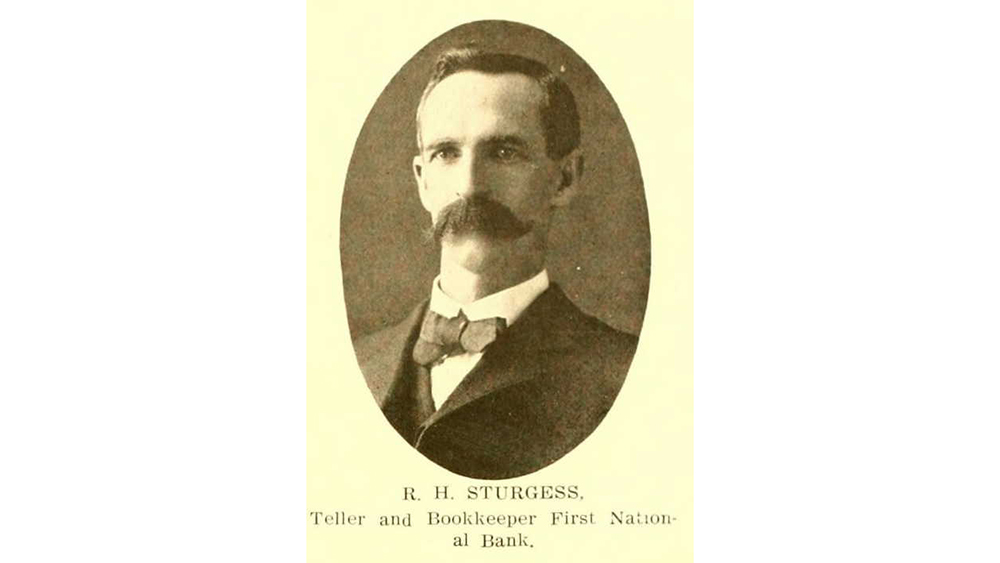 Harry Sturgess was a hard-working, small-town banker who relied on his pocket watch to bring order to daily routines and mark the times of life events.  Courtesy FNB Community Bank

I never met Harry, but his watch is now a valuable, functional heirloom that I’ll be passing to my daughter. And my bet is it will still be ticking.