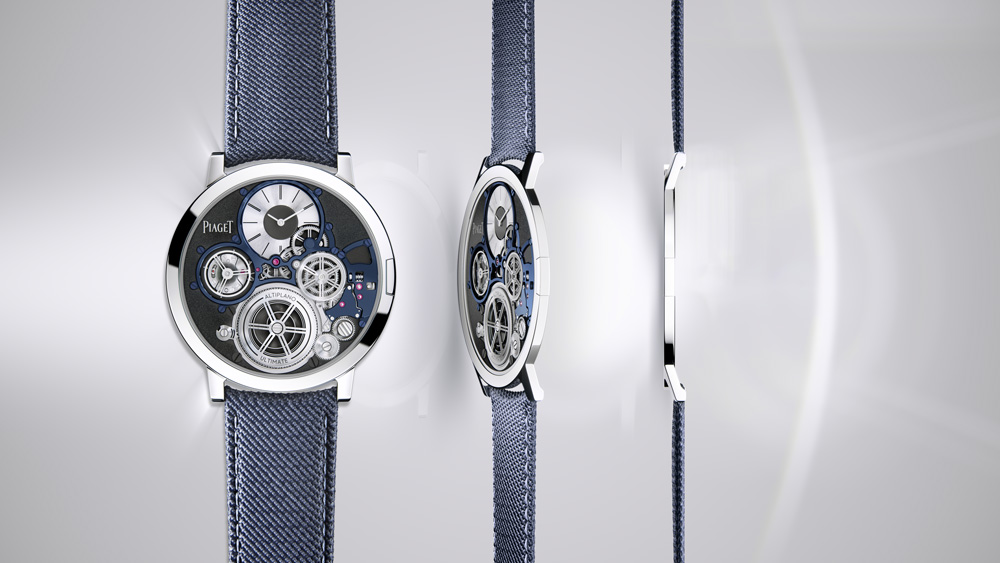 Out of a mind-boggling 226 entries, all of them outstanding in some way, the top prizes in 14 categories of watches in the Grand Prix d’Horlogerie de Genève were announced today.

The top watch among the 84 finalists was the 4.30mm-thick Piaget Altiplano Ultimate Automatic, the world’s thinnest automatic watch. The award recognized the special challenges of ultra-thin watchmaking. Reducing components to tiny tolerances can compromise strength and functionality, but Piaget made it happen by building the movement from the top onto the mainplate. It also serves as the dial plate, by recessing the mainspring barrel under a flying bridge, and fitting the hour and minute hands slightly below the bridges, preventing the crystal from hitting any moving parts in the event of shock. The result is a watch that is needle-thin: a mere 0.12 mm of cobalt separates the movement from the wearer’s skin. “There were some challenges in creating the most unimaginable, unthinkable watch ever,” said Piaget CEO Chabi Nouri, accepting the award. “But our engineers and watchmakers proved that nothing is impossible. This is what happens when crazy ideas become reality. Let’s all keep dreaming, creating and inspiring others in our industry.”

The Men’s top watch prize went to celebrated independent watchmaker Kari Voutilainen for the 28SC, a 10-piece limited edition. The watch is a beautiful example of exquisite finishing—done in-house by hand, but it also has an exceptional movement. Its oversized balance wheel allows for perfect regulation of the watch within strict tolerances, and two escapement wheels give a direct impulse to the balance from two directions. The result is an extremely efficient movement that requires far less energy and more stability than traditional lever escapements. The watch was designed, built, fabricated, finished and assembled in Voutilainen workshops, which creates only 50 to 60 watches a year.

The Men’s Complication prize was awarded to Greubel Forsey for the Hand Made 1 (also a Robb Report “Best of the Best” issue winner), a one-of-a-kind piece made by hand according to traditional principles of watchmaking, including original manual tools. Only five of the watch’s 308 components were not made by hand: mainspring, jewels, crystal, case gaskets and spring bars for the strap. “Everything else was born of human touch. It was a huge project intellectually, and it was a big push for our team to put it together,” says Stephen Forsey, (half the duo that includes Robert Greubel). He says the components were made to tolerances of between 2 and 4000ths of a millimeter. It took more than 6,000 hours to make the watch. “The Hand Made 1 is about expertise and craftsmanship and skills, and keeping those skills alive is part of our culture,” says Forsey. “We wanted to make sure we can transmit and safeguard these skills for future generations.”

Bovet 1822 picked up two awards in the competition, including the Ladies prize for the outstandingly guilloched Miss Audrey, named after the eldest daughter of company president Pascal Raffy, and the Mechanical Exception award for the Bovet 1822 Récital 26 Brainstorm Chapter 2, an astronomical watch, representing the brand’s specialty. It is a skeletonized rendition of a southern/northern hemisphere moon phase with a second time zone and a flying tourbillon, assembled in a sapphire crystal case. “This watch represents the continuity of an idea I had in 2015 to make astronomical timepieces, always 100% in-house, and combine them with the art of engraving and decorating every single timepiece,” said Raffy. “I’m so very honored for this award on behalf of our artisans.”

The Petite Aiguille, the best watch with a retail price of under $8,000, was awarded to Breitling’s Superocean Heritage 57 Limited Edition II, some of its proceeds were donated to front-line workers in the fight against Covid-19. “We had a great response to this watch from consumers, and now we have a great response from the professional world. I’m very proud for the team,” said CEO Georges Kern, who explained that after the first edition of the watch was released, he was told the rainbow-colored dial markings matched the badge colors for the U.K. health care system (NHS), which prompted him to produce a new series to support health care workers in countries most affected by the virus. Breitling also won the Diver’s watch category, for the Superocean Automatic 48 Boutique Edition, with 300-meter water resistance and a DLC-coated titanium case.

Here are the winners in each of the 14 categories of the Grand Prix d’Horlogerie de Genève 2020: