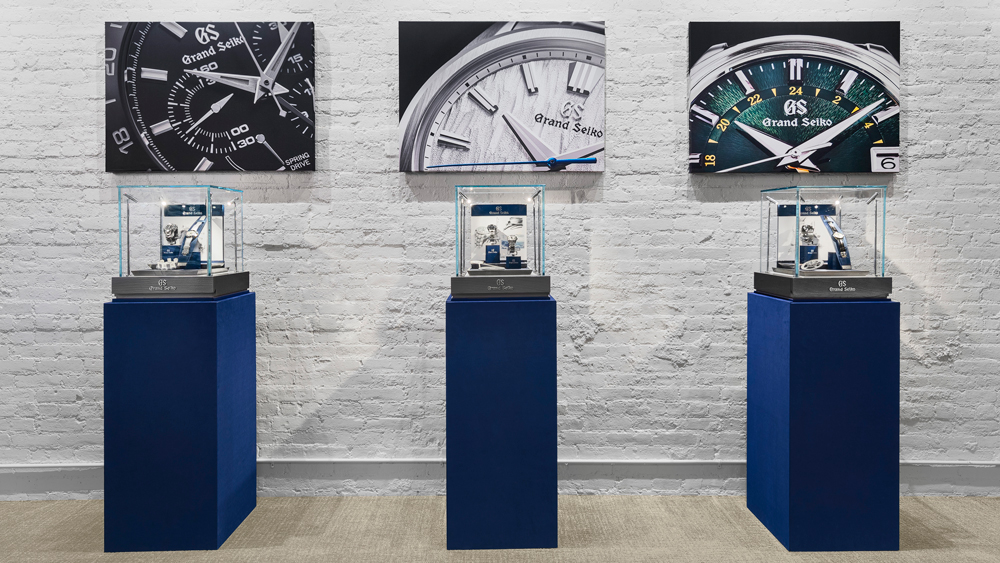 In 2017, Seiko Watch Corporation separated its hand-assembled luxury collection, Grand Seiko, from its lower-priced core Seiko lines, making it a standalone marque with its own distribution and design philosophy. The move represented Seiko’s push into the luxury segment and since then, it has opened three Grand Seiko mono-brand boutiques in the U.S.: Beverly Hills, Miami and New York. This week it opens a fourth, operated by Watches of Switzerland.

Located at 154 Spring Street, the new store is just a few blocks from Watches of Switzerland’s Soho location on Greene Street. The 1,100-square-foot shop will house the fullest representation of Grand Seiko in the city, including models from the Masterpiece, Elegance, Heritage and Sports collections.

“Our US partnership began with the opening of the Watches of Switzerland flagship in SoHo, so it is only fitting that we are working together again for the opening of our boutique in the same neighborhood,” says Brice Le Troadec, president of Grand Seiko Corporation of America.

Watches of Switzerland has carried the brand in its Soho flagship since it opened in 2018, and earlier this year, it hosted a pop-up exhibition of Grand Seiko’s collections called the “Nature of Time.” It was organized around Grand Seiko’s design philosophy, which stems from the Japanese tradition of celebrating the course of nature and time by breaking the four seasons down into six subtle stages within each, for a total of 24 seasonal phases or sekki. The collections on display included watches that represented winter with white textured dials meant to represent the snow caps of a cool winter landscape, or textured light blue dials in a wave pattern to represent ripples on Japan’s many lakes and ponds shimmering in the summer sun.

Grand Seiko debuted the first of what has become an ongoing limited series around the sekki theme in 2019, exclusively for the U.S. market. It was followed up last year with a duo of watches representing soko, the seasonal phase occurring at the end of autumn, and this year, a series of four GMT pieces representing the four main seasons. They incorporate signature elements of the Grand Seiko line, a high zaratsu polish, a signature finish that plays on light which has been a selling point with collectors of the Grand Seiko brand. Two contain Grand Seiko’s Hi-Beat automatic movements, and two contain Spring Drive movements. Watches of Switzerland (and Grand Seiko Boutiques) will be the exclusive retailer of the new SBGJ249 GMT through the end of July.

“From their debut in our SoHo flagship, to our collaboration on The Nature of Time Experience, and now a spectacular stand-alone boutique, our journey with Grand Seiko is a testament to our shared vision and commitment to innovative retail and world-class watchmaking,” says David Hurley, executive vice president of Watches of Switzerland.

It is also a sign of Watches of Switzerland’s booming business. Last year, in the midst of the global pandemic, the public company’s second-quarter sales were up 20 percent compared to the same period in 2019. It also opened new mono-brand stores for Omega, Tag Heuer and Breitling, all of which swung open their doors in December of 2020.