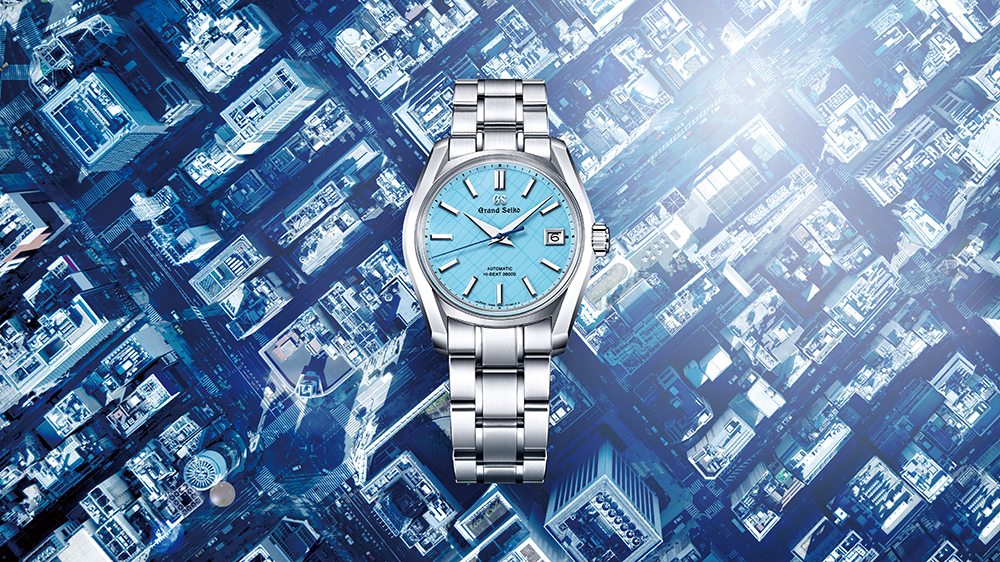 Grand Seiko’s latest watch is a sky-blue tribute to the neighborhood where the brand was born.

Dubbed the Ginza Limited Edition SBGH297, the timepiece’s dial is covered with a street map of Ginza, Tokyo. It’s here founder Kintaro Hattori opened a watch repair shop in 1881 and laid the foundation for Seiko. In 2017, Grand Seiko split off to become an independent luxury label focused on high-end designs like this.

The commemorative model sports a 40mm stainless-steel case that is brushed and polished using Grand Seiko’s signature Zaratsu technique. In addition to its striking grid-like design, the face is finished in the industry’s hottest hue, which can be traced back to the wildly popular Tiffany’s Blue Patek Philippe Nautilus. It’s meant to evoke the afternoon sky above the aforementioned luxury shopping district.

Elsewhere, the watch is fitted with steel hour and minute hands, matching steel markers, a contrasting blue seconds hand and a date indication at 3 o’clock. Grand Seiko’s signature lion emblem, which it started using in the 1960s, can also be found on the sapphire crystal caseback.

Expected to hit the market by the end of June, the steel rarity will be the newest addition to Grand Seiko’s Heritage Collection. This series is best known for its reinterpretations of the brand’s earliest timepieces. Other models of the collection include reimagined versions of the 44GS and G2GS, which were both originally introduced in 1967.

A front-facing view of the Ginza tribute watch.  Grand Seiko

This isn’t the first time the brand has referenced its birthplace, either. Seiko unveiled two horological tributes of its own to mark its 140th-anniversary last fall. Released in October 2021, both limited editions had dial designs that mirrored Ginza’s cobblestone streets.

The Ginza Limited Edition SBGH297 will be available in Japan only for $6,040 by the end of June. Limited to 260 pieces, it will be fittingly stocked at just five stores throughout Ginza. Looks like you might have to plan a trip to Tokyo for this piece.