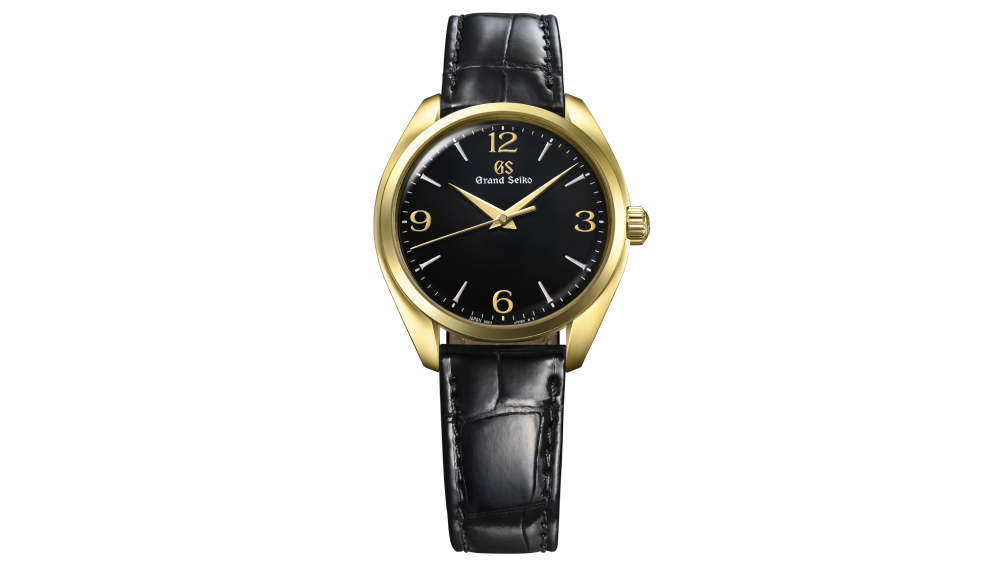 Anniversaries are often a cause to look back. Grand Seiko did just that in honor of its 60th, tapping into its own heritage to create the latest (golden) addition to its lineup.

Part of the aptly named Elegance Collection, the SBGW262 is steeped in Japanese tradition. Its slick black dial is coated in traditional Urushi lacquer, which comes from trees grown in and around the town of Joboji that lies in the shadow of Mt. Iwate. It’s this mountain that dominates the skyline above the Shizukuishi Watch Studio where Grand Seiko’s finest timepieces are manufactured. And being that the lacquer is a rare domestic variant of the glossy substance, it is harder to handle than most other varieties, increasing the amount of skilled labor required.

Though the dial is already precious, it only increases in value given that the polished 39mm case surrounding it is forged from 18K yellow gold. Curved sapphire crystal across the front and the transparent case back protect the face (with its gleaming hands) and movement, respectively. The dial has sweeping Arabic numerals but is also punctuated by distinct indexes with a raised maki-e technique by the master of Kaga Maki-e Urushi, Isshu Tamura.

The clear case back offers a glimpse at the in-house 9S64 caliber movement.  Courtesy of Grand Seiko

This piece operates via an in-house, manually wound 9S64 caliber movement with 24 jewels and a 72-hour power reserve. It is not the kind of watch a wearer would want to take with him into the water, but it remains splash-resistant nonetheless. The subtle curvature of the sapphire combined with the textures beneath lend this model a strong three-dimensional appearance that encourages a closer look.

But such a luxe timepiece wouldn’t be complete with just any old bracelet. As a finishing touch in keeping with the opulent case, Grand Seiko chose a richly grained crocodile leather strap which fastens via an 18K yellow gold buckle.

Head over to the brand’s website to collect one of your own for a substantial but worthwhile $30,000.