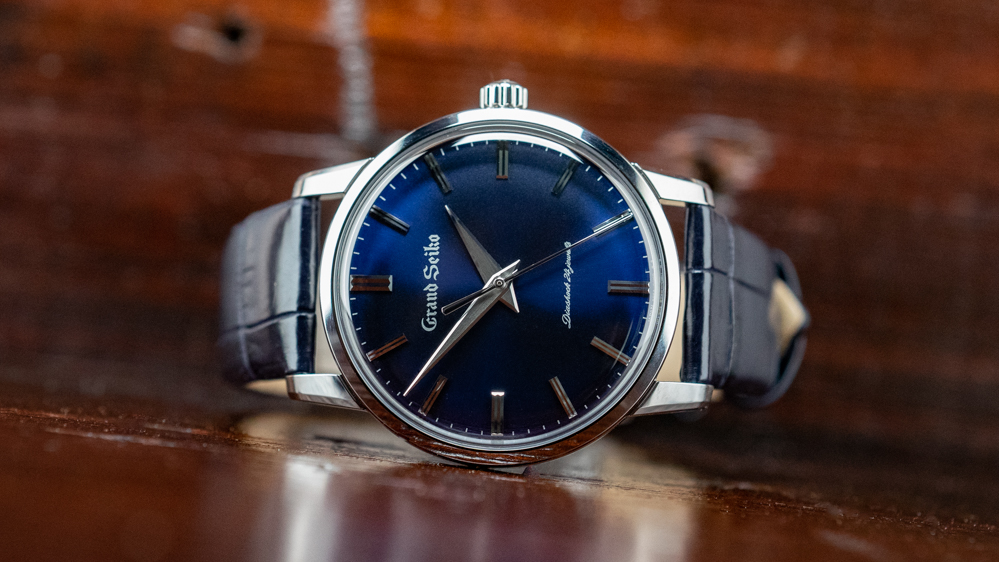 Grand Seiko’s Elegance Collection is composed almost entirely of minimalist, time-only dress watches. With this line the Japanese watchmaker goes up against Swiss stalwarts like Patek Philippe’s Calatrava and Vacheron Constantin’s Patrimony watches, and while the quality and styling of the Elegance Collection is on par with some of the best of Switzerland’s dress pieces, Grand Seiko’s prices are usually significantly lower. Just one of the reasons it has become an in-the-know brand among savvy collectors who seek horological value over prestige.

To get a more intimate feel for the Elegance Collection, I spent time with two of them on the wrist: the SBGW259 ($8,000), a modern interpretation of its very first watch from 1960 and the SBGK007 ($6,900), a brand new design. These two pieces offer an interesting entry point to a history that spans many decades and show that the brand can innovate extensively without sacrificing the placid aesthetics, high craft, and mechanical prowess that have always distinguished their timepieces.

Grand Seiko has garnered a reputation as an ‘insider’s best choice’ for high horology. Why? As much as I’d like to wax poetic about Japanese nature-based aesthetics and so on, I believe it comes down to the prices. It’s almost impossible to see where a corner has been cut on the SBGW259 and the SBGK007, which suggests that they account for some of the best value within the luxury market worldwide.

The SBGW259 looks like the Grand Seiko of 1960 at first glance, but the case is playing tricks on us—it is titanium (a modern alloy in watchmaking), polished to such a high degree that the surfaces glimmer like steel or even white gold. Grand Seiko calls this particular titanium Brilliant Hard Titanium, which reduces the warm yellow tones typical of this metal to reveal a more neutral color. The Zaratsu polishing, a brand signature, produces surfaces so flat that even tiny text is reflected without distortion. The deployant buckle has been left largely matte, except for one small surface that glimmers like the watch case. It’s as if Grand Seiko is offering proof that the case is titanium.

The SBGK007 is a stainless steel watch with a case that’s reminiscent of the King and Grand Seikos of the 1960s, after Taro Tanaka came in as lead designer. Tanaka’s “Grammar of Design” laid out a few rules that led to futuristic-looking cases unlike anything on the market. The SBGK007’s case is like a curvy version of an early Tanaka-designed piece. The polishing here is typical of Grand Seiko: unimpeachably flat and, as such, elegant in ways steel is usually not. The SBGK line also slips beautifully under shirt cuffs, and is easily Grand Seiko’s most elegant design to date.

Both of these watches use versions of Grand Seiko’s acclaimed 9S series mechanical movements (SBGW259 uses 9S65 and SBGK007 uses 9S63, seen above). Both are hand-wound mechanicals, with the difference being the small seconds and power reserve gauge on the SBGK007’s 9S63 iteration. With static precision of +5 / -3 secs/day, 72-hour power reserve, and insane finishing, these movements appear to lack nothing. The beat rate is standard at 28,800 vph, rather than the high-beat 36,000 vph that some Grand Seikos use. While the elegance of a 36,000 vph seconds hand sweep would be nice here, the gain in power reserve may be the better choice for a hand-wound dress watch likely to spend weekends in the watch box.

Wearing the SBGW259 doesn’t feel like wearing a vintage watch. The original version was 35 mm, but this one is a more modern 38 mm. Without a bezel, that’s a lot of dial and when you add in lightweight titanium, the SBGW259 simply feels modern. However, the old-school styling of the indices, the scripted Diashock text, and the classic dauphine hands offer a retro vibe.

We’re fans of Grand Seiko here at Robb Report, so the fact we’re impressed with these releases is not a complete surprise. I’m not one to announce things like “a brand new classic” lightly, but Grand Seiko, in my opinion, produced exactly that with the SBGK range. A new watch model from an established brand can be rather divisive, yet the SBGK lineup maintained enough of Tanaka’s Grammar of Design to feel more like a natural extension of the Grand Seiko catalog than an alien invading it.

If I’ve learned anything from wearing a recreation of the very first Grand Seiko and their latest iteration of a dress watch, it’s that Grand Seiko has developed a coherent and unique aesthetic language from which they have almost never wandered, even when they disrupted that evolution by hiring Taro Tanaka to shake things up. In this way, Grand Seiko genuinely feels like the Swiss brands they set out to trounce after WWII, in that they have, in a very short time, established a legacy that rests on principles of ultra-high-quality craftsmanship and strong regional aesthetics, while maintaining a uniquely Japanese heritage.