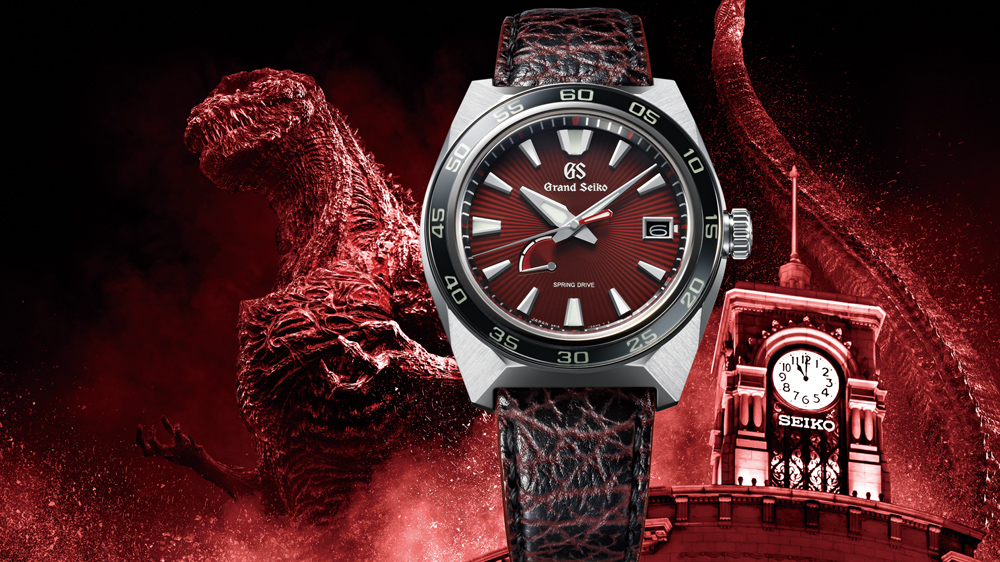 In tribute to the 65th anniversary of the original Godzilla film, Grand Seiko has released a titanic new timepiece inspired by the titular monster. There is no greater global Japanese figure than the famous big-screen monster, which made its reign of terror known to the world back in 1956 (the original film, by Ishirō Honda, was first released in Japan in 1954). In the first Godzilla flick, the Jurassic creature destroys the clocktower in Ginza above the Wako store, a department store owned by Seiko that had just opened two years prior to the film’s release. This year also marks the 20th anniversary of the Japanese brand’s Spring Drive movement, which powers the new watch. Limited to just 650 pieces with a sticker price of $12,500, the model be available for purchase in November.

The Spring Drive movement, caliber 9R15, is known for its high shock and temperature resistance and a precision of 0.5 seconds per day. Spring Drive was first introduced to the Grand Seiko line in 2004 and generates energy through a mechanically-driven power train with a quartz regulator instead of an escapement or balance wheel, which ensures greater accuracy.

Its burgundy-colored dial in a sunray pattern, said to mimic the rays of fire emitted from Godzilla’s roars, complements both its legendary movement and its 44.5 mm titanium case. The three-fold-clasp strap is made from sharkskin. The transparent caseback features a black stamp illustrated by Shinji Higuchi, co-director and special effects director for the 2016 movie Shin Godzilla. It combines the monster destroying the Ginza clocktower and Grand Seiko’s lion insignia.

But whether you care about the Godzilla inspiration or not, this is simply a cool watch. We got a sneak peek of it back in May, and it looks and feels great on the wrist. Best of all, it doesn’t look like anything else out there. Grand Seiko smartly kept any overt references to Godzilla on the back of the timepiece so that it doesn’t feel gimmicky, unlike other watch releases tied to pop-culture or historic events.

Godzilla will roar into theaters once again next year when Godzilla vs. Kong, starring Alexander Skarsgård, Millie Bobby Brown and Eiza González, premieres in March.