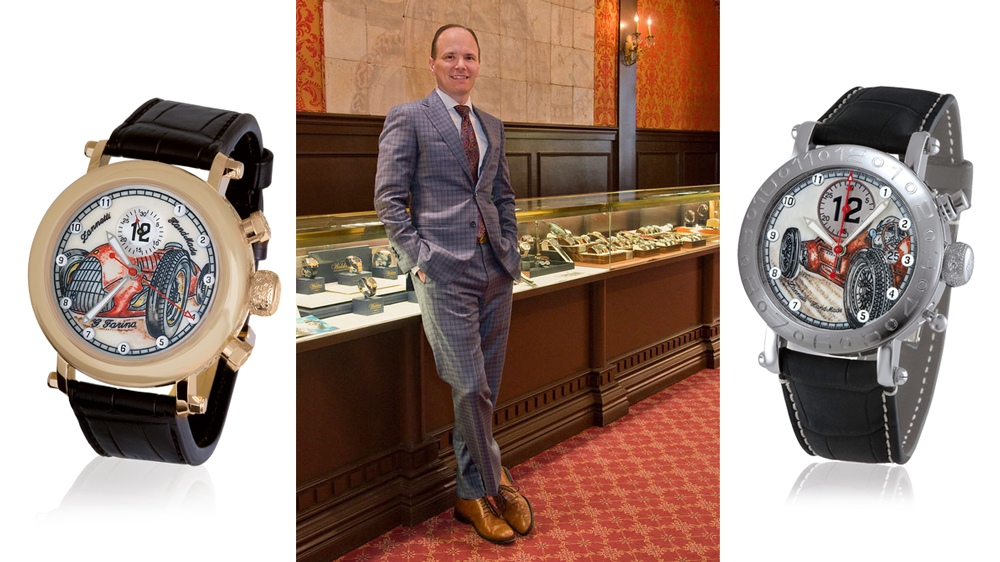 Grenon’s of Newport in Rhode Island has been one of the U.S.’s most unique watch retailers for the last 18 years. Owner Ray Grenon has made a name for himself selling far-out timepieces that include everything from a timepiece encased with live bullets to customizable one-offs that fulfill requests such as painting a client’s Porsche 911 onto the dial. While Grenon’s does sell mainstream watches for its more traditional clientele, it’s the ultra-unusual timepieces that have become the bread and butter of his business. We caught up with Grenon to find out about 2018’s wildest watches.

You’re known for selling nontraditional timepieces. How did you become known for this in Newport?

I’ve been selling watches for 25-plus years now. In the ’90s, I wrote for a watch magazine, so I kind of built up a bit of a following. I worked in Boston before I opened up my own store. I was in Boston for a number of years, and then I came to Newport. New England is very traditional, but Newport gets tourists from all over the world. We have the International Tennis Hall of Fame right next door to us. We’re the town where the America’s Cup used to be, and there is still a lot of yacht racing going on, so you get all kinds of people from all over the world. So it’s not just New Englanders who are shopping here. And word spread. We’re the only people in the country that have a lot of these pieces, so if you’re in Boise, Idaho, and you want a special one-off Zanetti, we’re kind of the only place you can go, so we get calls from all over.

What have been some of your best-selling watches this year?

For 2018, at the top end, Alexander Shorokhoff has some pieces in that range, and they go up from there. Speake Marin’s London Chronograph and Zanetti, who does a lot of custom one-of-a-kind pieces with hand-painted dials.

What is the craziest request for a custom timepiece from Zanetti that you’ve received?

One client wanted a nude photo of his wife painted onto the dial of the Zanetti watch. They brought it in and showed it to me, and I’m like, how am I supposed to react to this? Am I supposed to wink at him and give him a thumbs up? [Laughs] It was a $10,000 timepiece.

I did another one that was cool where the gentleman wanted a picture of his new Porsche 911 Turbo, and he wanted the strap to match the interior of his car. So I contacted Zanetti, and I said, “Can you get the strap to be the same color as the interior?” Mr. Zanetti said to me, “Sure, we can get close.” I said, “Well, close isn’t good enough.” So I actually went to my local Porsche dealer and I bought an armrest from a 911, and we made the strap from the leather of the armrest so it matches perfectly. He was thrilled.

You sell some very outside-of-the-box watches from ArtyA. Can you tell us about those?

Yvan Arpa is famous. You’ve seen his designs before, but you probably just never knew it. The Romain Jerome watches that have the Titanic rust on them that were popular 10 years ago, that was him. Samsung’s latest smart watch, he designed that, as well. He does a lot of design work for other companies, and he does ArtyA for himself and he’s really wild. He makes these bullet watches with real bullets still live with the gunpowder in them and everything.

He even has a series of werewolf watches, where the bullets are actually silver. And he says he rubs them in garlic and only sets them when it’s a full moon. And if you met him, you would believe him.

There’s one called the Russian Roulette where it shows just the back of a casing where it’s been fired on the dial of the watch, and it spins around like it would in a revolver. The really cool pieces, those start at $10,500 and go up from there.

He’s made dials out of real butterfly wings, and he once made a watch where the entire case was made out of a piece of fossilized dinosaur dung, and he sold it in a heartbeat. One watch even had his own blood splattered on the dial. It’s hard to out-crazy Yvan Arpa.

What watch are you personally excited about this year?

Zanetti did a one-off that is just drop-dead gorgeous. We’ve all seen watches with a champlevé enamel dial from the usual suspects, but this is the first time I’ve ever seen somebody do not only the dial but the entire case—the lugs, the front, the sides, everything. It’s covered in champlevé enamel. And Alexander Shorokhoff did a watch where the movement is completely skeletonized, and he hired a watchmaker from one of the most esteemed watch houses around to create it. That watchmaker does amazing engravings. On top of the skeletonized movement you can have your initials engraved dead center on the movement. It’s only $11,500, and the workmanship is amazing, so that one is really a highlight of the year, too. In fact, I’m wearing mine right now.

Sizes are coming down slowly but surely. Even 38 mm watches are coming back in—it wasn’t that long ago that was considered a women’s watch, but really 38 to 42 mm on the high end is kind of the new normal. That’s the big one. Yellow gold is coming back, too, and two-tone watches have been coming back, as well, but the size thing is the big number one thing I notice.

Have you felt the need to tap into the pre-owned market?

Yes, we do. What happens with us is that people walk into the store and say, “I’ve never heard of any of this stuff.” And then they learn a bit about it and want to trade in a bunch of traditional watches for one of my more unusual timepieces. I just sold a beautiful Arnold & Son; that’s another brand who we’ve been doing well with, and the gentleman who bought it traded in 23 of his more mainstream watches for one Arnold & Son. I taught him all about the Arnold & Son Chronometer #36. He fell in love with it. People trade in their Rolexes and whatever else. So we see a lot of that that gets traded in for somebody’s more interesting pieces because they’ve already bought the piece to impress their friends that has the big name, and they’re over that at this point in their lives and they say, “Okay, now I want something that nobody else has.”