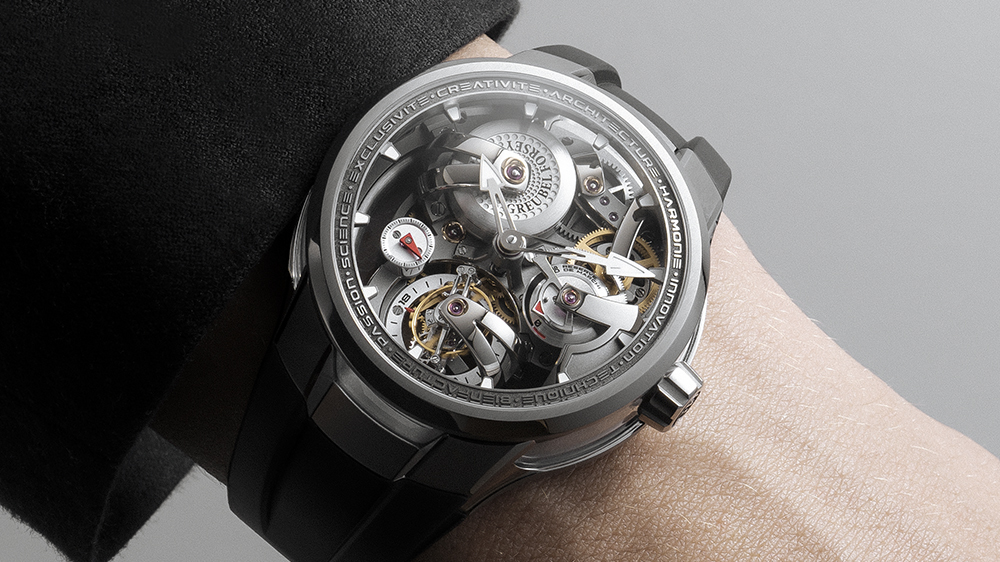 Unconventional movements are Greubel Forsey’s stock in trade. The brand’s caliber components are generally arranged in a 3-D sculptural form on various planes with openworked dials. Lately, the brand has also been making unusually shaped cases part of its repertoire of distinguishing elements.

The case of the 24-Seconde Architecture is shaped like a convex conical frustum. What on earth is that? Essentially, it means a cone shape, and here it is manifested as a watch case, one that is wider at the caseback (47.05 mm) than it is around the bezel (45 mm). Thus, it flutes upwards from the wrist to the top through the course of its 16.8 mm thickness. And, while it looks round from the top, a slight turn of the case at a different angle shows its convex shape, something that makes the watch more ergonomic to wear, not to mention more aesthetically appealing. Greubel Forsey says the shape’s aesthetic purpose is to contain “enough volume to fully showcase the movement architecture, while at the same time giving the impression of being significantly smaller than it actually is.” The brand’s timepieces often wear rather large on the wrist (given all of the technical components necessary to create the high-horology pieces), so this will be a welcome change for collectors looking for a better fit.

Despite its refined and slimming shape, the 24-Seconde still packs in plenty of horological heft. The 354 components of the movement seem suspended in space, with the largest elements—the barrel cover at 11 o’clock and the tourbillon case at 6 o’clock—dominating the composition. The power reserve indicator sits between them at 3 o’clock—all three of these main components are moored by spherical bridges made of titanium. They are polished to an impressive shine, including bevels and countersinks. The barrel cover is lacquered, circular-grained and engraved with the Greubel Forsey logo and contains not one but three co-axial, series-coupled mainspring barrels, delivering a 90-hour power reserve. The escapement is inclined at a 25-degree angle, and it rotates fast—once every 24 seconds—which adds to the chronometric performance.

Greubel Forsey has made sure the wearer will get a full view of the components. The caseband is made of sapphire crystal, so you can see the whole arrangement from the top as well as the sides. In addition to the spectacle, the brand took care to make sure visual ease was also at play. The indexes and tips of the hour and minute hands are liberally coated with Super-LumiNova to make them stand out against the bold architecture of the dial. And you can’t miss the (small) small seconds hand: It’s a singular red arrow tip on a protruding disk at 8 o’clock. Telling time is after all, still the point (for some).

Framing the whole scene is another Greubel Forsey signature element: The proclamation of its brand values. They often (though not always) appear somewhere on the brand’s watches, including the baseplate, caseback or case side. Here, the slogan, in French, is executed in a relief-engraved fashion around the inner bezel under the crystal reading, “Architecture, Harmonie, Innovation, Technique, Bienfacture (Craftsmanship), Passion, Science, Exclusivité, Créativité.” It’s a mantra that defines luxury watchmaking today.