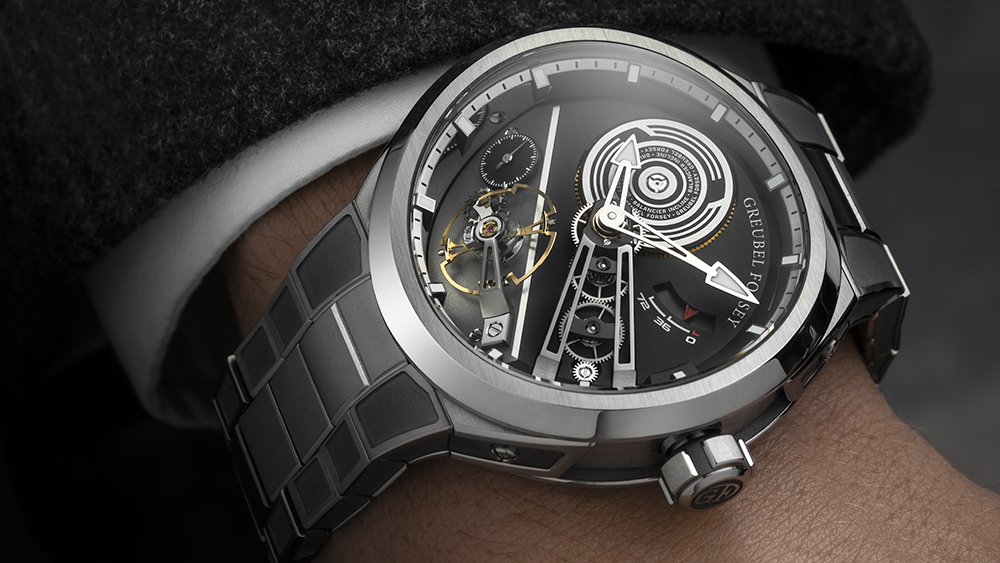 Antonio Calce took the reins of Greubel Forsey one year ago, with a directive to forge a new path forward for the brand, founded in 2004 by independent watchmaking duo Robert Greubel and Stephen Forsey. His goal was to redefine—or simply tweak—everything from distribution and production to marketing and price points. The result is a strategy that, in a nutshell, dictates fewer collections but twice the production, more Greubel Forsey boutiques but fewer authorized dealers, and (relatively) lower price points but no compromise on quality and finish.

There will still be tourbillons, including the inclined and multiple-axis escapements that are signature to the brand, but there will also be more modern, sporty and accessible pieces, with prices lowered from around $500,000 to under $300,000—which still defines it as a low-production, high-cost brand, but makes it marginally more affordable. The overall aim is to ensure the brand’s survival beyond the lifespan of its founders—who have stepped back to allow Calce room to lead.

The Balancier S2, introduced at Dubai Watch Week in December, is an indication of what to expect going forward. It’s a smaller version of the Balancier S (from 46.5mm to 43mm), with more subtle finishes—gone is the script engraved around the bezel, and the red-tipped hands are now highlighted by white Super-LumiNova. And there is notably no tourbillon; it’s a GMT. The case is made of lightweight titanium with a sleek, ovoid curved shape that is notably more subtle than the bulging subdials of many previous Greubel Forsey models. At $220,580, it’s one of the lowest-priced watches the company has produced. The GMT Earth, for example, with tourbillon and signature rotating day/night orb, is priced between $500,000 and $600,000. (That model was discontinued, following an 11-piece swan song released at last year’s Watches & Wonders). Likewise, the GMT Quadruple tourbillon, priced $800,000 is set to be phased out. In fact, all previous versions of Greubel Forsey’s GMTs will come to an end next year in favor of a new GMT caliber that will be priced in the $350,000 range, to debut sometime in 2022.

The idea, according to Calce, is to attract younger collectors, albeit very well-heeled ones, to the brand. The strategy involves increasing production, yet paring down the number of SKUs.

One way to scale up production is to limit the production of certain high-end pieces, allocating resources elsewhere. Since it started in 2004, Greubel Forsey has introduced 30 calibers—and 30,000 references of components. In 2019 alone, five new calibers were introduced. “We have to do something with these incredible assets,” says Calce. Some calibers will be phased out, while the vast inventory of components will allow them to customize others, creating unique movements, something that dovetails with “Renaissance d’une Montre,” or Rebirth of a Watch—a concept planned for 2023 that invites previous Greubel Forsey customers to return their watches for redesign and upcycling. The strength of the program is that it allows customers to not only change the bezel, lugs, hands or indexes, but also, more unusually, the movement. Clients will be able to add a function, like a date, a second time zone or a tourbillon. The pricing structure is yet to be determined.

“The previous strategy was to dedicate production aimed at collectors, which was very niche,” says Calce. “Our goal now is to open a new product segment with a new product offer [set to officially debut later this year]. The new collection will be modern, but quieter, more pure. We won’t play with color so much. We’ll organize the collections by function, always focusing on the movement, building designs around variations on some of our calibers.”

Since production is set to double over the next two years, the plan includes nearly doubling the square footage of the manufacture, a modern glass building added onto a 17th-century farmhouse near La Chaux-de-Fonds, Switzerland, which opened in 2009. The expansion will enable Greubel Forsey to make its own hairsprings and hire more watchmakers. As for distribution, the number of authorized dealers will be reduced from around 50 to 60 to just 25, with a plan in the works to build a network of flagship boutiques with various partners.

“The only way to secure the brand for the future is to put a good management team in place,” says Calce. “This is possible partly because of the trust between Robert Greubel [the majority shareholder] and myself. We will define it together, and bring it forward through the next 20, 40, 100 years.” While Stephen Forsey will remain as technical director, both partners will take a step back from day-to-day operations.

The new direction does not mean the end of high complications, ones that have taken home top awards at the Grand Prix d’Horlogerie de Genève, like the $1.1 million Grand Sonnerie Chiming watch or the Hand Made One, a piece made by hand according to traditional principles of watchmaking with original manual tools that took three years to make. In fact, a new variation of Hand Made One is already in the works. “We’ll continue to do crazy things,” says Calce.