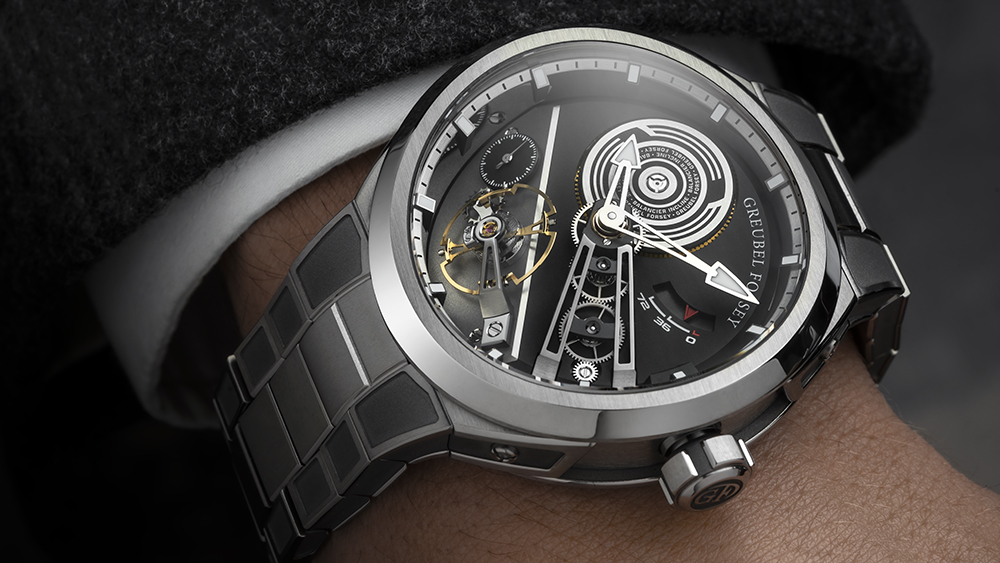 This week, the Swiss watchmaker launched its hand-wound limited-edition Balancier S² watch at Dubai Watch Week. The piece has been slightly enlarged from its predecessor, which was 43 mm in diameter, to sport a 46.5 mm titanium case (its 13.75 mm thickness remains the same in both the Balancier S and Balancier S²) and is outfitted with a new brushed titanium bezel and polished flanks. And for the first time, its double-arched titanium bridge, which holds the gear train and straddles the 4 o’clock hour marker, is openworked to provide more depth to the dial.

Another notable design change can be seen in the Greubel Forsey branding, which is now placed in a circular pattern under the internal bezel between 12 and 2 o’clock, instead of on the barrel cover as it was displayed in the original Balancier S. A white luminescent material replaces the red that previously decorated the arrow tips of the hour and minute hands. Likewise, the hand on the seconds indicator subdial (located at 8 o’clock), formerly in red, is now black. The effect is a cleaner, less busy approach to the dial which some watch purists will appreciate.

What remains the same, is that the gold balance wheel system, positioned between 6 and 7 o’clock, which stays tilted at a 30-degree angle. And the 72-hour power reserve indicator is still between 2 and 3 o’clock, but is told via an aperture with a red arrow inset in the dial rather than a hand indicating the numbers on top of the dial as previously seen in the first Balancier S.

The back of the titanium watch displaying jewels, the GF logo on its crown, and a metal strap.  Greubel Forsey

The big idea is increased legibility. The backdrop of the dial comes in black or grey with sharp edges in a matte-effect hand-grained finish that allow the indices to stand out. These hour markers have also been extended for a lengthier display than seen on the Balancier S, for greater prominence on the dial. All in all, this is a more streamlined and elegant take on the first Balancier S.

“With the GMT Sport and the original Balancier S, we had already revealed a new facet of our identity,” Greubel Forsey said in a statement. “Today, we’re raising this highly contemporary and exciting approach to fine watchmaking to the power of 2!”

The watch is delivered on a rubber strap, but is available on a titanium bracelet upon request, both come with a folding clasp engraved with the GF logo. It is limited to 88 pieces and is available through an authorized retailer starting at $220,580. Check out the Greubel Forsey website for more details.