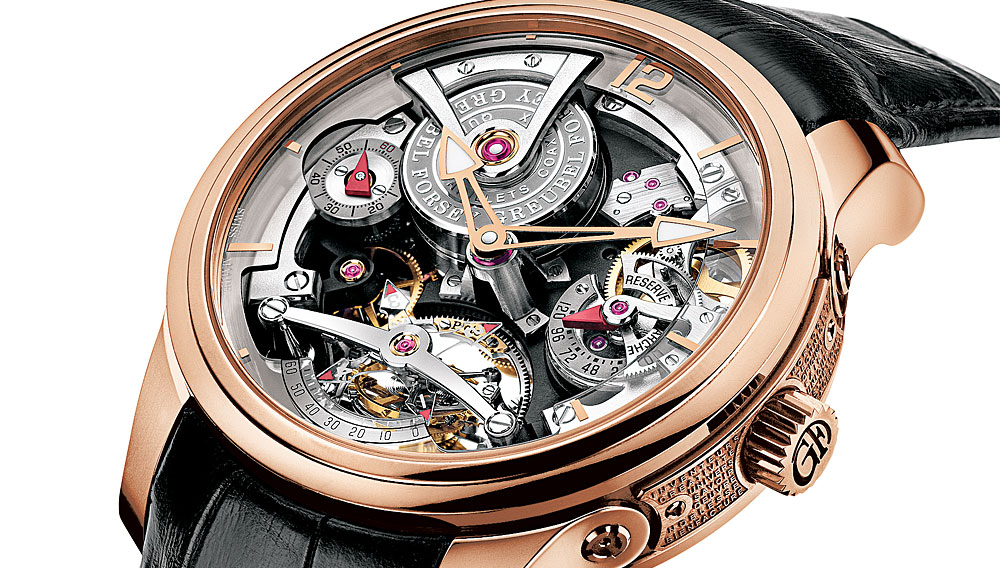 Watchmakers Robert Greubel and Stephen Forsey probably did not intend for their latest Greubel Forsey Double Tourbillon Technique (www.greubelforsey.com; available through Westime, 310.470.1388) to overshadow the signature technical development and finishing of their earlier watches. Yet despite the fact that it introduces no new major technical innovations, this particular model remains the most accessible and visually arresting timepiece the pair has yet created. Like many of today’s most successful elite-level watches, the $470,000 Double Tourbillon Technique employs an open-works design that adds dimensionality and a sculptural quality to the visible movement. Greubel Forsey complements this visual appeal with an array of technical and aesthetic modifications. Departing from their traditional style, the watchmakers decided to coat the baseplate in a black-chrome finish, to lend a sense of depth and highlight some of the unusual components inside the timepiece. The engraved cylinder between 10 and 11 o’clock actually consists of four coaxially mounted winding barrels. The eye can follow the gear train clockwise to the crown, where a spherical differential operates the power-reserve indicator, or counterclockwise to the double-tourbillon timekeeping element.