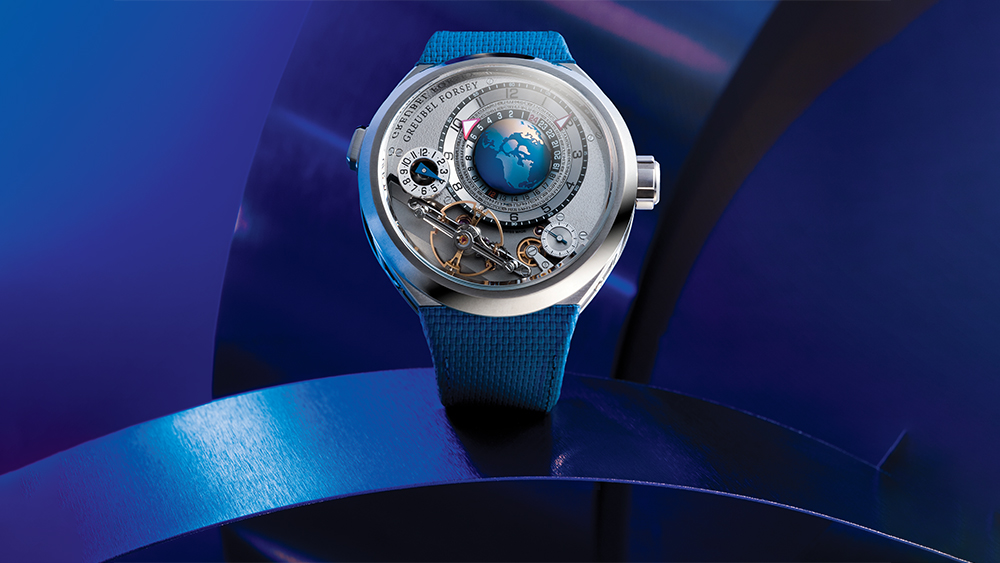 Collectors of the Swiss watch brand Greubel Forsey breathe the industry’s most rarefied air. That’s because, since its founding in 2004, the company has crafted only highly complicated timepieces with dizzying price tags—in some cases, up to nearly $1.2 million.

Now, though, the La Chaux-de-Fonds–based watchmaker is hoping to reach a somewhat more earthbound stratum of enthusiasts. During Geneva Watch Days in August, the brand—named for its cofounders, French watchmaker Robert Greubel and his British counterpart, Stephen Forsey—introduced a new take on its signature GMT model. And the piece, designed with a more contemporary look to appeal to a slightly younger crowd, is indeed more accessible.

Priced at a (mere) $400,000 on a rubber strap or $445,000 on a titanium bracelet and housed in a 46.5 mm convex titanium case, the GMT Balancier Convexe shares with its discontinued predecessor a dial bearing a rotating, three-dimensional globe, the defining feature of the model, if not of the brand itself. But this new version, which features the globe at center as well as a balance wheel inclined by 30 degrees (instead of a tourbillon), boasts a design described by CEO Antonio Calce as “more cool, more pure, more clean.”

Replacing the 11-year-old GMT model, it’s the first tangible evidence of a brand evolution that began two years ago when Calce, an industry veteran of Panerai and others, took over the chief executive role.

“It’s a new pillar,” he tells Robb Report. “Before, our product offer was dedicated to collectors, but for me, it was important to enlarge the consumer base. I call this new client a ‘connoisseur.’ ”

In addition to inviting a different type of buyer, Greubel Forsey’s two-pillar pricing strategy—divided between the uppermost models aimed at the brand’s traditional high-flying collectors and other pieces, such as the new GMT, aimed at Calce’s “connoisseur” class—rests on a carefully calculated plan to increase the brand’s production capacity from around 200 pieces a year to 500. Calce explains, seemingly paradoxically, that ramping up production will allow the company to dedicate even more resources to produce handmade watches for the most discerning collectors by creating an economy of scale that supports making more components in-house.

Next year, Calce says by way of example, the company plans to introduce one of the most complicated wristwatches the industry has ever seen. “But at the same time,” he says, “in the second pillar, you will feel luxury, you will feel modernity, you will feel a really cool watch. And we need both to reach one step further.”

Not forsaking its ultra-ultra-high-end clientele, Greubel Forsey will launch a tailored customization program next year for collectors looking to tweak or up the ante on their beloved timepieces.

Assembly of the watch  Courtesy of Greubel Forsey

Beginning early next year, Greubel Forsey will offer owners an unprecedented opportunity to reimagine aesthetic and even technical elements of their existing watches. Known as Renaissance d’une montre, the program allows clients to request changes both big and small, from altering simple features such as bezels and lugs to adding complications, including a second time zone.

“You can give another life to your watch,” says Calce, comparing the initiative to the automotive-aftermarket industry’s ability to retrofit vehicles with new-and-improved engines.

Owners of a Greubel Forsey Balancier Contemporain could, for example, replace the model’s balance wheel with a tourbillon, while those in possession of the Tourbillon 24 Secondes Vision might add a moon-phase display or a small-seconds disc at 4 o’clock. (Citing the bespoke nature of the program, the brand declined to speculate how much such changes might cost.)

“You come in our factory, you have a chance to talk with our ingenious designers, and we do the evolution of your watch with you,” Calce says. “It’s a real experience.” One you won’t find anywhere else.