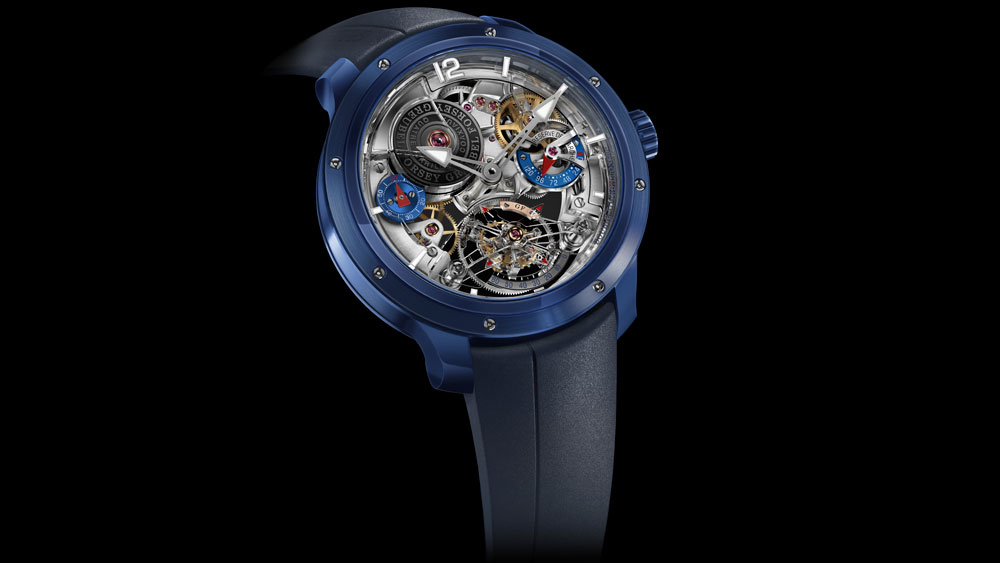 As mechanical timekeeping goes, it doesn’t get much more precise than the Double Tourbillon 30° Technique by Greubel Forsey. The model, which won first prize for timekeeping performance at the International Chronometry Competition in 2011, maintained a timekeeping performance of between 0.3 and 0.8 seconds during the competition—“10 times better than a COSC certification,” according to Stephen Forsey, cofounder of the boutique watchmaking firm.

“We are very proud of this achievement and the Double Tourbillon 30° Technique remains a firm pillar in our collection, which today spans over 25 unique calibers,” he adds.

In an exclusive for the U.S. market, the Double Tourbillon 30° Technique is now available in a 48.4 mm case machined from a block of blue ceramic.

“We chose ceramic in part for its robustness, making the case extremely resistant to scratches and corrosion,” Forsey says. “We then decided to further heighten its colors and textures by applying a variety of very intricate finishes. The deep blue ceramic case is a formidable technical achievement that truly does the movement justice.”

With this limited edition of 11 pieces, each priced at a cool $695,000, the model’s familiar open-worked design, whose three-dimensional architecture is beloved by watch geeks the world over, places even more emphasis on its hand-wound mechanism.

“We rethought and reworked the movement to incorporate intricate sapphire elements that showcase the timepiece’s inner workings like never before,” Forsey says.

In addition to a 60-second tourbillon cage inclined at 30° rotating inside a second four-minute tourbillon cage, the model has 421 components, including synthetic sapphire bridges. It comes on a rubber strap with a titanium clasp engraved with the Greubel Forsey logo.

Anyone interested in a first-hand take on the model might consider a trip to the Big Apple at the end of October. Forsey will present the Double Tourbillon 30° Technique in ceramic at WatchTime New York on October 25.