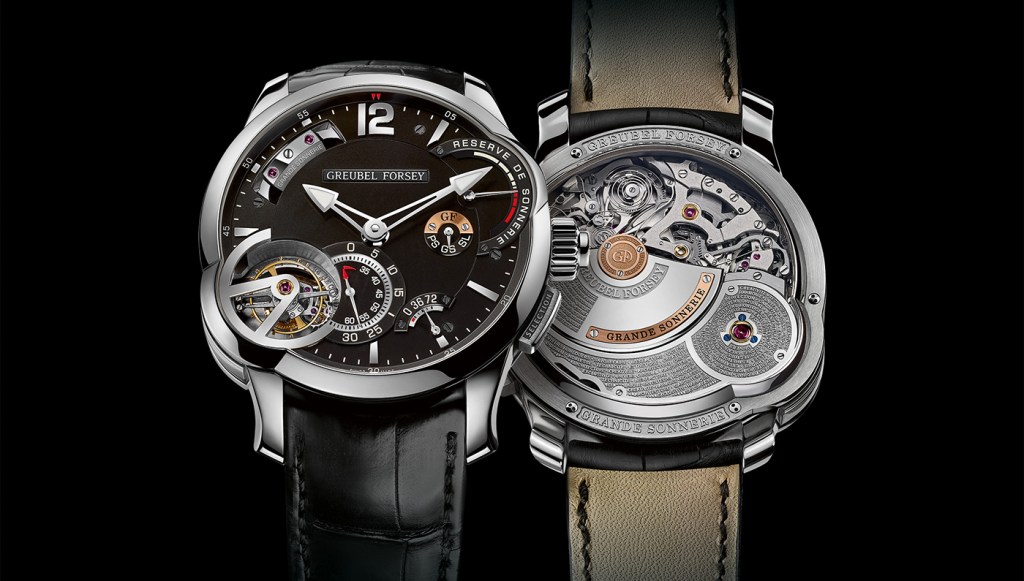 “You can work 11 years on a chiming watch,” says Greubel Forsey cofounder Stephen Forsey, “and if those 20 seconds of listening to the strike aren’t good, then you’ve missed the target.” Fortunately, the authoritative chime of the Swiss brand’s newly released Grande Sonnerie (roughly $1.15 million, 212.221.8041, greubelforsey.com) is proof that its 11-year development—by far the longest period the notoriously meticulous company has devoted to a watch—was not in vain.

Forsey and his cocreator, Robert Greubel, have fit 935 components, tourbillon escapement included, into one of the brand’s Asymmetrique cases, crafted this time in titanium for effective sound propagation. The rich, regular, and highly audible sound is all the more impressive because it is the product not of splashy sound engineering, as is the case with many new acoustic watches, but of careful design, adjustment, and traditional tuning.

Like many watches of this type, the Grande Sonnerie, which will be limited to four or five examples each year, can switch from grande sonnerie mode, with hours and quarters chimed as they pass, to petite sonnerie, in which just the hours are sounded; a silent mode and a separate, on-demand minute-repeater function also are included. A barrel-spring system wound by an automatic rotor powers the chiming function. Eleven different safety systems protect the movement’s delicate parts from accidental damage.

The brand devoted considerable attention to the strike mechanism. The cathedral gongs are milled from a single piece of hardened steel together with their base. The hammers, visible through the dial, hit these gongs with considerable force, thereby generating a volume that overcomes the dampening effect of waterproofing rubber gaskets. “We could have made a traditional piece that would have been $700,000, but it would have been the same as others,” says Forsey. “What we have tried to do is to make an irresistible grande sonnerie.”