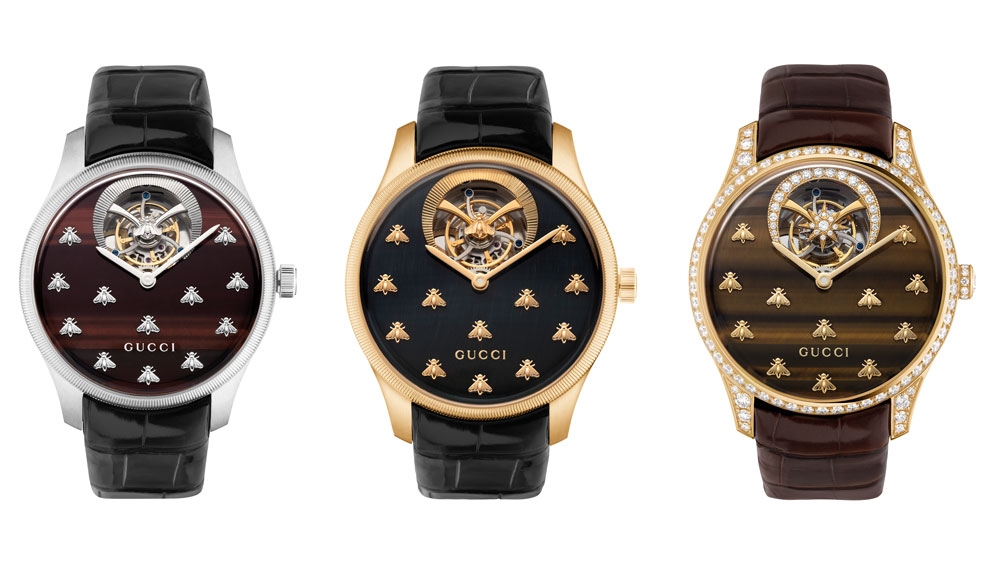 It’s a big year for Gucci and the Italian house is aiming to make a splash. In celebration of its 100th anniversary, the brand is stepping up its game by entering the world of haute-horology. Back in 1972, Gucci was one of the first major fashion brands to embrace timekeepers as a style statement. To date, they are the largest producer of fashion watches in the world. Almost 50 years later, the company takes its watch offering up a notch. In a total of four high-end collections, 33 new models have been unveiled (four of which can be transformed multiple ways). And, unlike other fashion houses that delve into this category but don’t necessarily get too involved, Gucci’s creative director, Alessandro Michele, is said to have had his hands on the design process.

The collections, which include everything from tourbillons and jumping-hour movements to fully gem-set pieces and sapphire-crystal constructions, are assembled in Switzerland’s watchmaking mecca in La Chaux-de-Fonds at the Kering watch manufacture. Dials are crafted in the Gucci-owned Fabbrica Quadranti facility in the Canton of Ticino in Besazio, Switzerland. The design is conceived in Neuchâtel, Switzerland, where Gucci houses its watch headquarters. The company’s first “in-house” movements are featured in the 25H (in all models) and G-Timeless Dancing Bees (in the tourbillons) collections.

The design is everything you would expect from Michele’s eclectic style. Several of the pieces incorporate his love affair with witchy iconography including stars, lions or tigers, snakes and bees. The latter three make up what the designer refers to as the Gucci Garden: Bees representing love (in reference to their honey-producing nectar), snakes symbolize rebirth (represented by its skin-shedding) and lions, of course, owning the idea of power and ferocity. Bees take flight in the G-Timeless collection, which includes tourbillon versions with or without diamonds, including two fully diamond-set bracelet offerings (115,000-195,000 euros or approximately $136,730-$231,850), while the Lions Head range (55,000-59,000 euros or approximately $65,400-$70,150) is a take on a secret-watch concept with the roaring head, set with diamonds in the mouth and eyes, swiveling to reveal time underneath on turquoise, malachite or tiger’s eye stone dials. The snake slithers onto the bezel of daintier pieces like the Dionysus and Play pieces. Appropriately, the latter can shed its bezel around either a mother-of-pearl or pavé diamond dial (8,500-18,500 euros or approximately $10,100-$22,000) to take on new forms in 13 variations ranging from a yellow-gold snake with a single precious stone for the eye to white-gold snakes encrusted with diamonds and precious stones.

Michele is, of course, at his best when playing to his penchant for the unconventional. The Gucci Grip watch, a quartz-powered timepiece inspired by the unusual jumping hour movements of early 20th-century Audemars Piguet, Patek Philippe and Cartier watches, has become an icon of the house. Now, it’s taken to new heights with mechanical movements housed in 18-karat white-gold and yellow-gold cases accented with 44 baguette-cut diamonds around the edge with stone dials in onyx, malachite and tiger’s eye or brushed-gold (150,000-250,000 euros or approximately $178,350-$297,250). Four entirely sapphire crystal editions (including the bracelet) come in clear, blue, green and pink for a fresh take on the staple (85,000 euros or approximately $101,000). The transparency of the cases allows for a full view of the numerical wheels with two different highlighted pastel windows for reading the current time. Although pictures were not yet available for publication, we can assure you these are sure to become the must-have pieces in the Grip lineup, especially for the streetwear obsessed.

But the G-Timeless Moonphase collection (32,000 euros each or approximately $38,000) is most reflective of Michele’s penchant for a heavy dose of romanticism and mysticism. Circling the moon phases is the Latin phrase Sine Amore Nihil (Nothing Without Love). Stars, shooting stars, tiny Saturns, diamonds and precious gems sprinkle the black or white mother-of-pearl dials. Like something lifted from a clairvoyant’s signage, they have a kind of magical appeal. They also look not unlike some of the extraordinary designs on gowns we’ve seen float down the Gucci catwalk in Milan. Equipped with quartz movements, these pieces are more about the dreamy design and materials, including 181-169 diamonds set in 18-karat white gold.

Needless to say, there is plenty to buzz about, but you will have to dig your claws rather deep into your pockets if you want a piece of Gucci’s fashionable take on high horology.