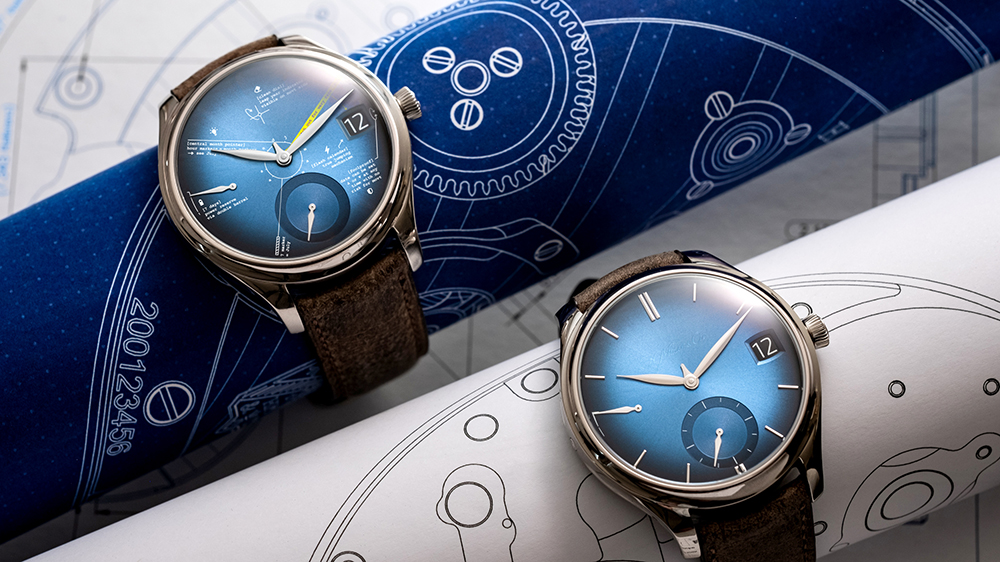 In the world of haute horologerie, timepieces are prized for highly complicated movements and designs. But with H. Moser & Cie’s new “perpetual calendar for dummies” on your wrist, you’ll spend much less time on Google searching its configurations.

Dubbed the Endeavor Perpetual Calendar Tutorial, the 42 mm watch features notes that resemble a “cheat sheet” and drawings that highlight its movement—and for connoisseurs of the brand, this sense of quirky humor is one of its defining characteristics (more on that in a moment). The piece has an 18-karat white gold case and contrasting “funky blue” fumé dial with a sunburst pattern. Limited to just 20 examples it was created to commemorate the launch of an updated version of the brand’s former Funky Blue edition from 2015. Sporting H. Moser and Cie’s logo in a stealthy new transparent lacquer, that reimagined timepiece is also now available.

As you’d expect, most of the specs for the Tutorial model aren’t that far off the original. It features the same leaf-shaped hands, date display and small arrow-shaped center hand that indicates the month. Both editions come with a curved transparent sapphire-crystal case back. The piece differs, for starters, with its quirky written explainers that provide insight on the watch’s calendar settings, power reserve, month pointer, cleaning the dial and more. A bold yellow stripe that alludes to a “very rare” date also accents the piece, alongside a small-seconds display without markers.

The front and back of the limited-edition Endeavor Perpetual Calendar Tutorial watch.  H. Moser & Cie

Both models come equipped with the watchmaker’s manual-winding HMC 800 movement. The double-barrel function includes an Original Straumann hairspring and an interchangeable Moser escapement. Its pallet fork and escapement wheel are both made of gold. The piece also has a hacking seconds feature that will stop the seconds when you pull its “M” adorned crown. With a frequency of 18,000 vph, the figure provides a lengthy power reserve of 168 hours, or seven days. A leap-year cycle indicator can also be found on its caseback, where all the components have been finished and decorated by hand.

H. Moser & Cie’s perpetual calendars have been around since 2005 and are best known for being able to adjust forwards and backwards at any time of the day (a rarity in this rarified world). The release of the Endeavour Perpetual Calendar Funky Blue model “contributed to the brand’s revival while establishing its new aesthetic codes—a bold blend of the traditional and modern,” the brand shares in a statement. In addition to updating the timepiece, a “cheat sheet” alternative was created to “aid those who may still wonder how their perpetual calendar works.”

To fans of the watchwaker, the Tutorial timepiece will simply represent its latest form of creative expression following a string of unique releases over the past year. One of those designs includes the Endeavour Centre Seconds Concept X seconde/seconde/, which is similar in design to the new perpetual calendar models featuring a brightly colored fume dial with a cartoonish rubber eraser at its center. Also, let’s not forget the Swiss Alp Watch Final Upgrade which was released as a middle finger to smartwatches. It resembles an Apple watch with a digital update disk on its dial, but unlike the world’s best-selling watch, it’s 100 percent mechanical.

The Endeavor Perpetual Calendar Tutorial and reimagined Funky Blue edition are available now for $65,000 and $60,000, respectively. Each comes with a hand-stitched kudu leather strap. Visit the H. Moser & Cie website for more details.