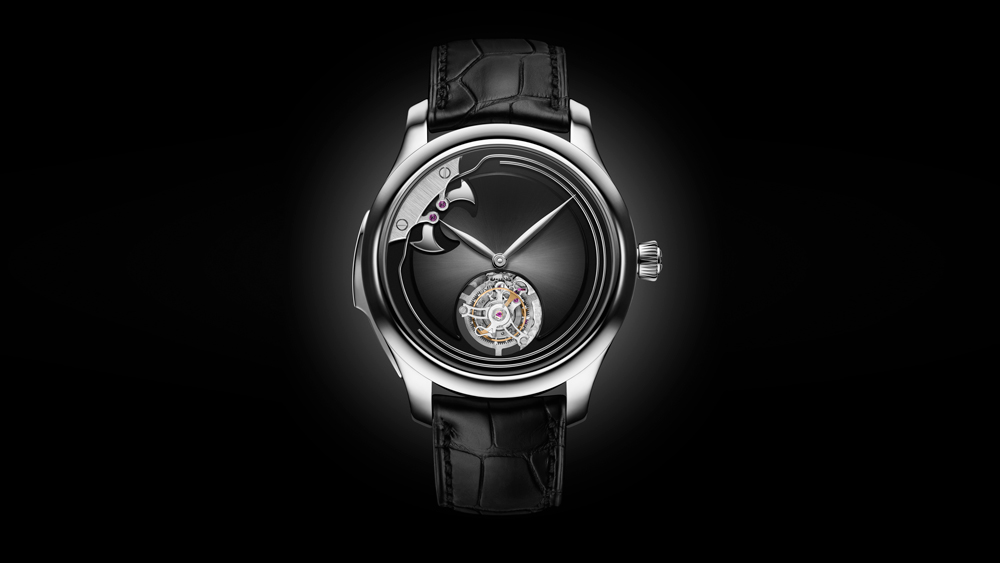 Minimalism and minute repeaters are two things that seemingly do not go hand-in-hand, but displaying a minute repeater’s hammers and gongs on an otherwise plain black dial (as H. Moser & Cie has done with its new Concept Minute Repeater) seems like such a great way to draw attention to the complication it is surprising it hasn’t been done before.

The minute repeater, one of watchmaking’s most esteemed complications, is often reserved for watches that look more like they belong in a museum than on the wrist of a 21st-century collector. In a way, this makes sense: the minute repeater was invented in an era where the lack of electricity necessitated a way to tell time without having to read a dial. H. Moser brings us into the future, reminding us that watchmaking is no longer just about telling time, and that the hammer and gongs of a minute repeater are easily the best show in watchmaking.

The brand is known for its minimalist approach—an extreme example of which is the Swiss Alp Concept, a minute repeater/tourbillon with no hands, no numerals, no logo and no chapter ring. The all-black dial shows only the tourbillon escapement, and time is communicated by activating the minute repeater lever. The watch is intentionally shaped like an Apple Watch in a cheeky nod to watchmaking’s greatest modern opponent. The one thing an Apple Watch can’t display? The mechanical tourbillon. Nor can it chime a minute repeater—the most difficult complication in watchmaking. At 330,000 CHF (approximately $332,584 at current exchange) it essentially gives the finger to Apple Watch owners and is, no doubt, an irresistible piece for high-end watch collectors.

The Concept Minute Repeater Tourbillon touts similar minimalist bravado, but, putting the jokes aside, Moser rounds out the case and adds hands and the minute repeater function to the display. The gongs are given a high polish to make them stand out against the dial, which is an abyss of black lacquer.

Positioning the chimes and hammers on the dial side is a challenge. In order to prevent interference with the flying tourbillon, the two gongs that circle the perimeter had to be curved to remain flush on a single level. The center of the dial was raised slightly and the case thickened to 14 mm to accommodate the movement. It also allowed space for a groove that creates a “sound box” around the hammers and gongs, which H. Moser says makes for greater acoustic resonance.

The movement, the manual wound HMC 903, is the 14th caliber developed by the brand since 2005, was co-created with MHC (Manufacturers Haute Complications), a Geneva-based boutique movement maker that specializes in minute repeaters. It sounds hour, quarter-hour and minute chimes, and has a 90-hour power reserve thanks to a large barrel with an extra-long mainspring. The 43 mm case is 18-karat white gold, and the black alligator strap has a red lining. It is a limited edition of 10 pieces priced at $320,000.