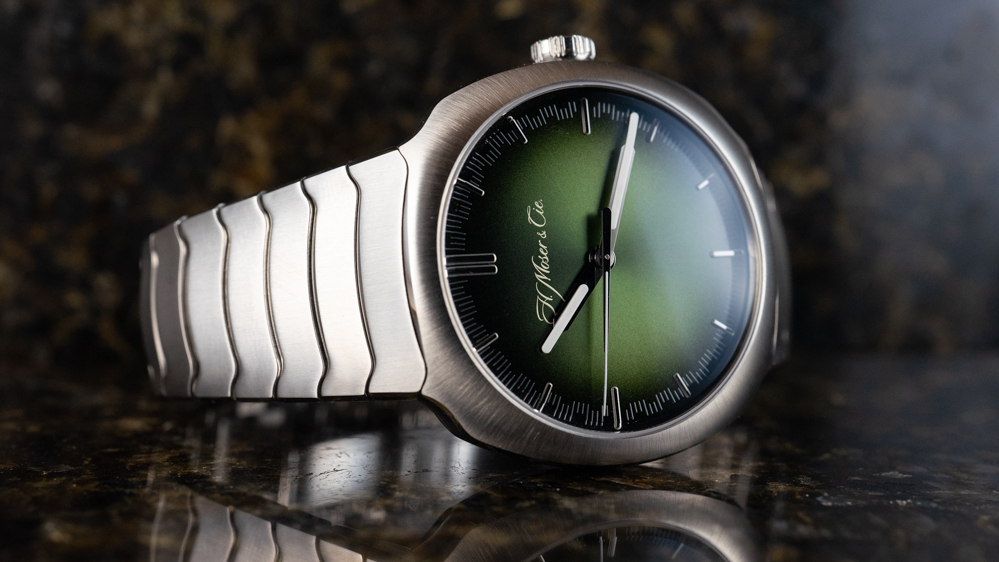 As I write, I have the 40 mm Moser Streamliner Centre Seconds on my wrist, and I feel sophisticated, elegant, cool and sporty all because of it. Enhancing our sense of self may ultimately be why many of us buy and wear watches, and perhaps the more versatile a watch is the more aspects of ourselves it can boost. Let’s call this emotional versatility. This new Moser comes loaded with it.

There are very few watches that integrate their disparate elements as seamlessly as this Streamliner, and this aesthetic unity lends the watch an aura of inevitability, like it’s always been there, yet the design is highly original. For these reasons, the Streamliner Centre Seconds feels like an instant classic within the highly competitive and increasingly crowded steel sports watch category. And given Moser’s impressive track record since the Meylan family took the helm in 2012, it was only a matter of time before they produced a bonafide classic. For my money, this is it.

At 40 mm, and without the chronograph functions of the first Streamliner (a unique flyback watch) which debuted earlier this year, the Streamliner Centre Seconds feels sleek. With its reptilian and liquidy bracelet, the watch wraps around the wrist like some futuristic bionic augmentation. This is among the most comfortable bracelets I’ve ever worn. Being very finely brushed with bright polishing inside the joints between links, the bracelet sparkles just enough to look luxurious, but without the bling factor you’ll find with brightly polished bracelets. It is refined and understated, but also whimsical, even playful.

On the case, that fine brushing radiates out from the center, extending the radial brushing on the dial. Rather than reflecting light like polished steel or absorbing it like more coarsely brushed steel, the case seems to transform light into a warm halo. There are slightly polished edges on the sides of the case that echo the polishing inside the bracelet links that integrate the package seamlessly. Like most Mosers, the sides of the case are as artful as any aspect of the watch, here with recessed brushed sections surrounded by a thin, polished frame.

Unlike some of the brighter Moser dials, the Matrix Green, radially brushed fumé dial of the Streamliner Centre Seconds doesn’t quite steal the show as much as it sings in harmony with the case and bracelet. The green is subtle and earthy while the fumé treatment adds incredible depth. Where other Moser dials radiate their effect outwardly, the Matrix Green dial pulls you into this effect. For this, the watch feels personal, intimate and again, understated.

In this colorway (and we hope there may be more coming), the Streamliner Centre Seconds would be equally at home under a tailored shirt cuff in a woody British study sipping single malt as it would peeking out from beneath a cashmere hoodie in a Silicon Valley board room pounding coconut water. That is to say that the watch is classic and cutting edge simultaneously, summing up Moser’s ethos quite nicely.

Mechanically, the HMC-200 self-winding movement is made entirely in-house, including a Straumann hairspring made at Moser’s affiliate company Precision Engineering AG. A solid gold winding rotor spins above the lovely and playfully shaped bridges featuring “Moser Striping,” which is perhaps best described as syncopated Geneva striping. Few rear-mounted automatic winding rotors afford such a clear view of the bridges, and it’s a treat to spend time gazing through the rear window. The power reserve is three days.

A luxury steel watch has to be waterproof, and a screw-down crown helps provide the 12 ATM/120 meter rating. Similarly, the Globolite hand inserts add sportiness and functionality, and this innovative ceramic material with LumiNova baked into it makes for a rather unique handset that will be familiar to fans of Moser.

At $21,900, this watch is going to attract those looking for a 100 percent Swiss-made steel sports watch that can hold its own with Patek Philippes’ Aquanaut and Nautilus, Audemars Piguet’s various Royal Oaks, Chopard’s Alpine Eagles and Vacheron Constantin’s popular Overseas models. However, the Moser is going to stand out from that crowd. It’s really quite an accomplishment, and it seems that the Streamliner series is poised for some excellent iterations going forward.