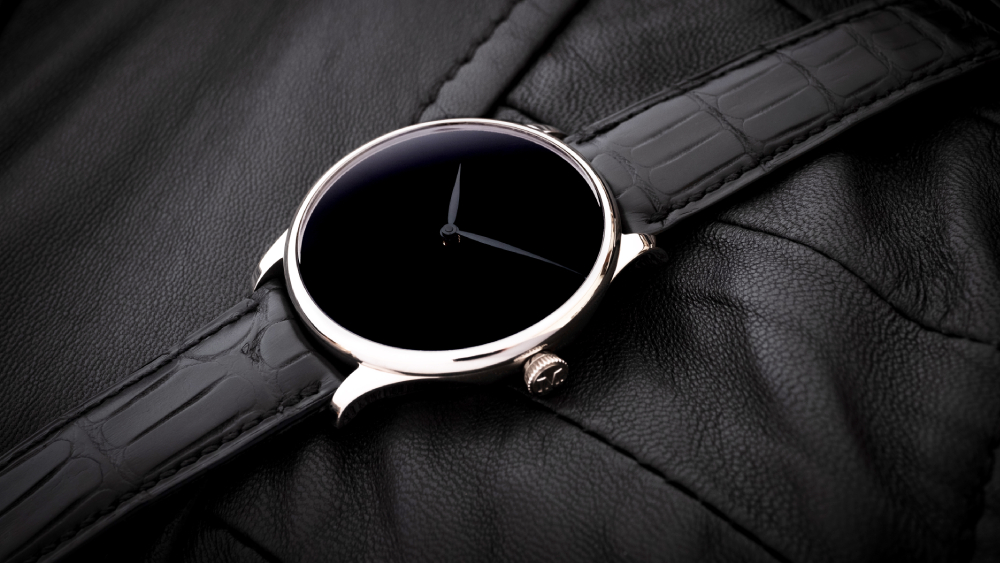 For the latest additions to its lineup of classic timepieces, H. Moser & Cie is going back to black.

The Swiss watchmaker simultaneously launched three all-black Venturer styles that eschew branding in the company’s distinctive minimalist style. The face of each one is coated with Vantablack, a material developed by U.K. firm Surrey NanoSystems recognized as the deepest black ever produced by artificial means as it absorbs more than 99.9 percent of light. Doubling down on the inky palette, each piece features slender black minute and hour hands, in typical cheeky Moser fashion, while still managing to be readable.

This group comes with an origin story as memorable as its design. On April Fools’ Day 2019, H. Moser & Cie posted an altered Instagram photo of a watch with a black dial and blackened hands––which made them appear invisible against their equally dark backdrop. What the brand didn’t expect was the overwhelming wave of requests it received from customers eager to purchase the pitch-black model. That’s when it got to work making the digital gag a reality.

The minimalist trio has impressive inner workings. For example, the Venturer Vantablack Black Hands and Black Hands XL are powered by Moser’s in-house and hand-wound HMC 327 movement, which ticks at 18,000 vph and has a three-day power reserve. In contrast, the Endeavour Tourbillon operates thanks to an in-house 804 self-winding movement running at 21,600 vph, also with a three-day power reserve. Each one secures around the wrist with a matte black alligator strap.

The range is available on the company’s recently launched e-commerce platform that was built in response to the success of its experiment with pre-owned digital sales. Prices start at $26,600 for the Venturer XL, $27,600 for the Venturer in white-gold and $69,000 for the limited edition Endeavour Tourbillion.