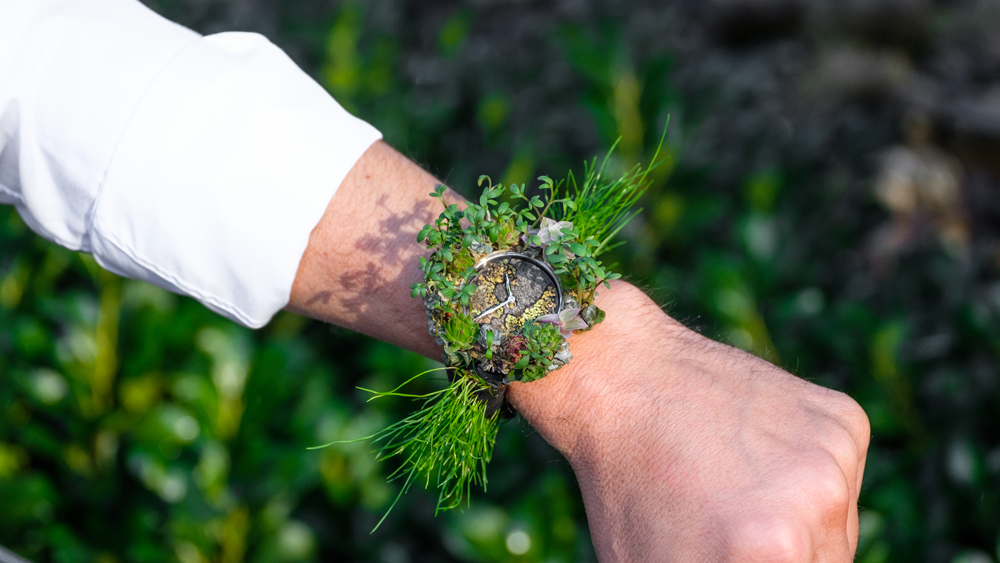 Who knew horologists could also be horticulturists? When it was first unveiled at the Salon International de la Haute Horlogerie (SIHH) 2019 in January, H. Moser & Cie’s nature watch made quite a spectacle. Many people assumed it was just a joke, and while it is a one-off, the watch ticks and it really does grow its tiny plants—you can see it in action in this time lapse video from @moserwatches.

Its steel case is adorned with soil, succulents, moss, mini Echeveria, cress, spiderwort and onion sets that are meant to bloom as a natural representation of time and its fragility. Beneath the foliage, the hand-wound HMC 327 manufacture caliber with a frequency of 18,000 vph is, in theory, meant to last well beyond the cycle of one lifetime. The dial is made from natural mineral stone and lichen from the Swiss Alps, while the strap is made from grass.

In honor of Earth Day, we thought we would venture to explain what H. Moser & Cie had up its sleeve when it created this crazy watch. It’s much saner than you think. The timepiece was created to announce that the watchmaker would be rethinking its approach by committing to a zero carbon footprint in its manufacturing process, fulfilling the certification conditions of the Responsible Jewellery Council this year and using Fair Trade materials. From its 2019 collection onward, all gold timepieces will be made using Fair Trade Gold. (The only other watchmaker, to our knowledge, using ethical gold is Chopard, which announced last July that it is now 100 percent committed to working with Fair Mined gold.) To drive the message home, with a nod to our own administration, H. Moser & Cie is using the hashtag #makeSwissMadeGreenagain to promote its new initiatives.

On top of its new internal practices, the company is also partnering with Room to Read, a non-profit dedicated to improving literacy and gender equality in education, to ensure that future generations understand why time is of the essence. The partnership will also produce new watches (but hopefully not of the garden variety).