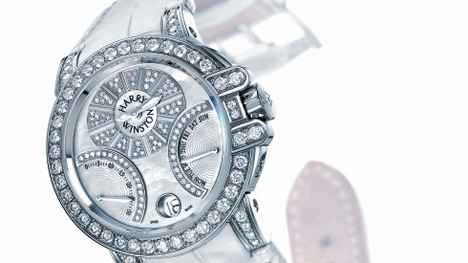 The jeweler Harry Winston once said that if he could, he would set diamonds directly onto a woman’s skin. It isn’t surprising then that when Harry Winston introduced its first timepieces in 1989, the company’s approach to women’s watches was, according to Beatrice de Quervain, global marketing director, to create “jewelry that tells time.”

The watches the brand made for men were a different story. Harry Winston endowed its men’s collections with innovative technical features that quickly gained recognition among male collectors. Its secret was collaboration with some of the top watchmaking talents in the Geneva area, like Jean-Marc Widderecht. In 2001, Harry Winston formalized this arrangement in the highly successful Opus project, building its first two Opus watches with François-Paul Journe and Antoine Preziuso, respectively, two of the most celebrated watchmakers in the city.

These days, however, mechanical movements aren’t just for men, and precious stones aren’t just for women. Diamond baguettes flank the face of the men’s Avenue Squared, while the limited-edition Diane, named after the Roman goddess of the hunt, is according to de Quervain, “one of our most complicated watches and one of the most complicated ladies’ watches out there.” The Diane features a case carved from a single block of gold, as well as—rarity of rarities—a minute repeater. This year, the brand produced Lady Z, a double moon phase edition of its coveted sports watches.

Ultimately, though, looks drive Harry Winston’s ladies’ timepieces. As de Quervain explains, “men collect items just to have them,” whereas a woman tends to have multiple watches “to go with how she perceives herself.” The Ocean Lady Biretro, for example, has a 36 mm case set with 90 diamonds, an automatic winding mechanism, and fascinating retrograde seconds and day-of-the-week displays, yet its bracelet is made of leather. It’s on the sportier side, appropriate for running errands or picking up the kids from school. The Avenue C bangle and the Avenue C Mini, on the other hand, both of which resemble bracelets and are made entirely of white gold, maintain the formal feeling of Harry Winston jewelry.

What’s de Quervain’s favorite Harry Winston watch? The one she wears, of course, an Avenue C Midsize, which, like many of her company’s latest creations combines diamonds along the case, bracelet, and dial, with a transparent sapphire crystal case back through which one can observe the watch’s graceful mechanical movement.