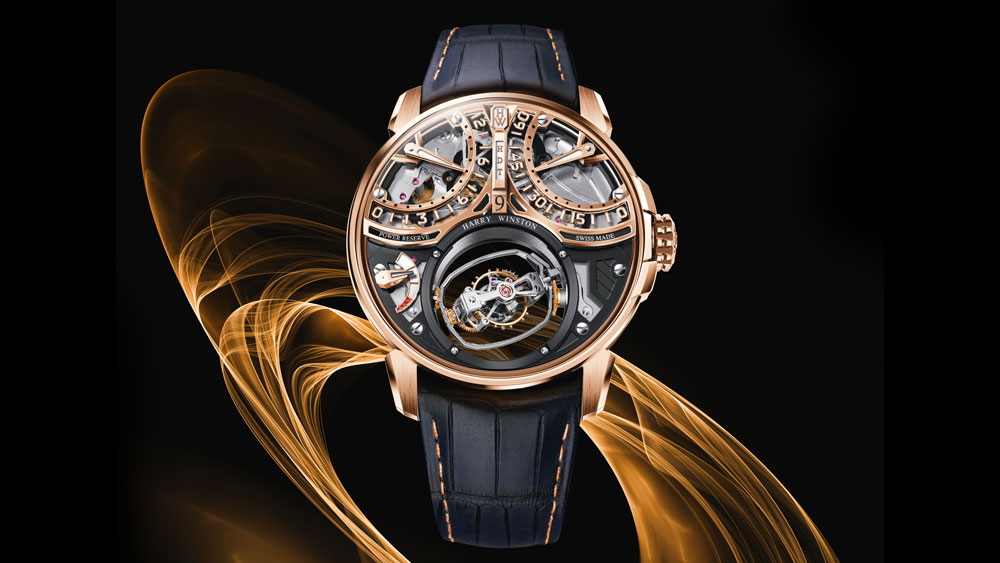 Harry Winston’s 9th edition of its Histoire de Tourbillon, released this year, is not only the most wearable watch in the series, but it also captures the Harry Winston brand identity  much more clearly than previous editions. Built in cooperation with CompliTime S.A.—the complication specialty shop run by the founders of Greubel Forsey—the annual editions of the series have always featured exotic presentations of the tourbillon. In recent years, they have featured extra-large, sometimes asymmetric cases and multiple regulators averaged through a differential—all hallmarks of CompliTime’s work.

This year however, the Histoire de Tourbillon’s wearability has been upgraded through the extensive use of titanium and open space in the movement. This results in a lighter timepiece, but it’s also more compact (at 46.5 mm in diameter and a little under 21 mm thick). Some that thickness can be accounted for by the use of box crystals to increase light and visibility of the movement—a key focus of the design.

The triple axis tourbillon at 6 o’clock is positioned in a large-scale aperture that goes all the way through the watch. A minimally built outer carriage, slowly rotating on a horizontal axis every five minutes also increases the view, while internal cages rotating at higher speed every 75 and 45 seconds are meant to capture the eye.

The time display in this edition is also pure Harry Winston. The watch employs the signature bi-retrograde display used in so many of the brand’s models in the past. Originally developed for the brand by Agenhor, the system has since been re-engineered by Swatch Group, which has featured it in models such as the Ocean 20th Anniversary. In Histoire de Tourbillon, the hours display has been given a jumping hand, which moves precisely on the hour.  These extra touches bring the Histoire de Tourbillon ever so slightly into more conventional territory, which ought to increase the demand for the ultra-limited run of 10 watches that will be made.