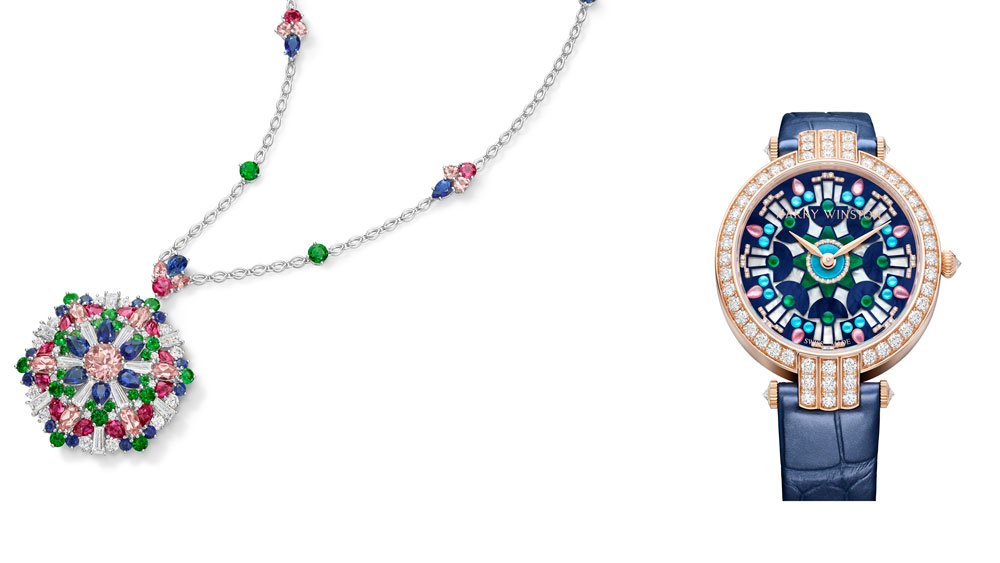 Known for its rock-size white diamonds, Harry Winston introduced an explosion of colored gemstones in its new high-jewelry this season. The collection is decked with pink-red spinels, aquamarines, tanzanite, rubellite, pink morganite and blue sapphires. The inspiration was a gold and diamond malachite kaleidoscope pendant, topped off with malachite from the jeweler’s archive, which contains a multitude of colored stones beneath a magnifying glass that move when the piece is turned—just like a child’s toy but somewhat more expensive. The original piece, which dates back to the mid-90s, was sold this month at Sotheby’s “Magnificent Jewels” collection in Hong Kong for HKD 252,000 (approximately $32,514). Other one-off iterations have been created, like this 18-karat yellow gold kaleidoscope in diamonds, sapphires and Paraiba tourmalines, which comes topped off with a detachable timepiece, have since been created by the house, but this year Harry Winston took a less literal approach using the patterns of colored stones on palm-size pendants and delicate jewelry watches.

“The Harry Winston Kaleidoscope Collection is an extraordinary example of the house’s collaborative efforts,” Nayla Hayek, CEO of Harry Winston told Robb Report. “From dynamic designs, to extraordinary colored stones and masterful techniques in gem-setting and craftsmanship, each piece embodies the enduring spirit of the House through a more modern, and playful interpretation.” The collection is comprised of 32 pendants, two of which have already sold to a single collector through the New York flagship on Fifth Avenue. They come in small, medium or large sizes on long chest-length 30-inch chains that could be doubled to wear closer to the neck (although it’s not recommended if you don’t want to scratch the stones).

Robb Report reviewed some of the collection via a private appointment at the Fifth Avenue boutique and can report that the pictures here do not do them justice. Each pendant is an incredibly vibrant cluster of colors—an effect achieved using the minimum amount of platinum to set the stones in order to achieve maximum sparkle.

“One of the aspects that make the fine jewelry pendants so spectacular, is the way in which they are set,” says Hayek.  “Each stone is perfectly arranged in a three-dimensional pattern, with no gaps or spaces, in order to maximize the light returned, resulting in a pendant that’s full of brilliance and life.”

Eleven watches accompany the pendants: five high-jewelry pieces and six Premier models. Beneath the sapphire crystal, each dial of the 36 mm Premier timepieces reveals a 3D explosion of shapes and patterns of stones set against a mother-of-pearl backdrop. They come in 18-karat gold cases with alligator-leather straps and house an automatic mechanical movement.

The high-jewelry watches, perhaps more suitable for a black-tie gala or red-carpet affair, are set in platinum cases with the gems encircling the dials on the outside of the case. Each comes with 71 brilliant-cut diamonds and are mixed in spiraling patterns in a variation of tsavorites, orange sessartites, aquamarines, rubies and blue, pink and yellow sapphires. Each houses a quartz movement and comes on a satin strap set with a clasp accented in 29 brilliant-cut diamonds.

The pieces are price upon request, but a handful are currently on display in Harry Winston’s New York City boutique (until October 23rd).